The Carroll News • May 25, 2021 • https://carrollnews.org/101647/campus/miciak-offers-positive-outlook-for-jcu-as-concerns-over-faculty-tenure-and-the-presidential-search-process-linger/ 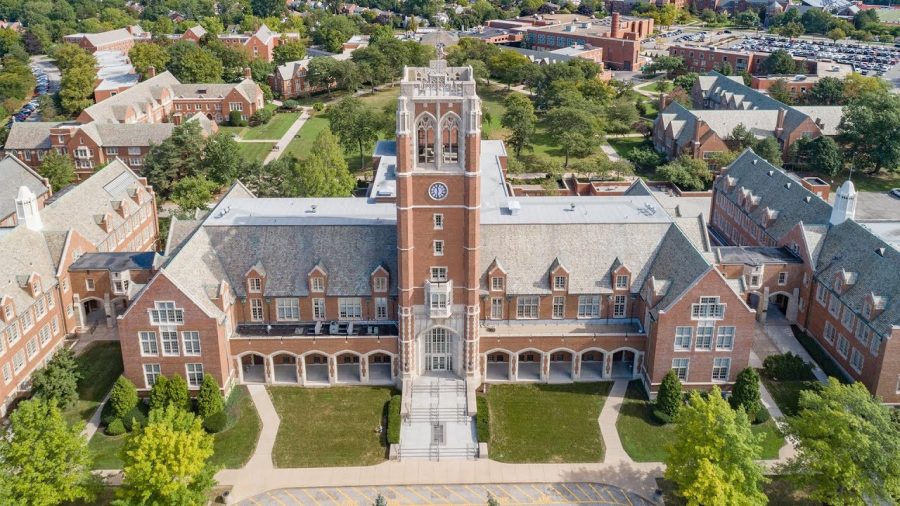 On June 1, Alan Miciak will be inaugurated as the 26th president of John Carroll University. Facing a looming enrollment crisis in higher education, concerns over faculty tenure and questions surrounding the process used for his selection as president, Miciak is entering his position during a tense period at JCU. However, Miciak says that his administration looks forward to facing these challenges and advancing the university’s mission.

Miciak was appointed as dean of the Boler College of Business six years ago where he also served as a professor of marketing. Previously, Miciak served as the dean of Duquesne University’s business school in Pittsburgh.

“In Dr. Al Miciak, the board saw a highly qualified leader with a proven track record of success at John Carroll, and one who could make progress quickly,” said Provost and Academic Vice President Steven Herbert. “I strongly support this decision. While it is always difficult to project at the beginning what effect a new presidency will have on any institution, Dr. Miciak has a strong 20-year record of leadership in Catholic higher education.”

“In some ways, the work is always the same,” Miciak told The Carroll News. “What is the mission? Why are we here?

“It’s a great honor to be president of such a historically significant university. Previously I was tasked with internal operations, looking at issues of administration and enrollment to make the institution more competitive. And, with the role of president, we layer on all the external aspects. I love challenges, and I love to solve problems.”

As president, Miciak says his primary goals will be to strengthen the university and prepare it for the coming “disruptive changes” to higher education.

Regarding the controversial budgetary hardship amendment to the Faculty Handbook, Miciak maintained that all of the recent measures taken ensure the continued delivery of quality education to John Carroll students.

Asked about how he thinks Miciak will handle the faculty tenure situation, Business professor Andrew Welki emphasized the importance of getting the university in a financially strong and sustainable position to prevent future budgetary challenges.

“I think that’s his goal, that’s where he’s going to devote all of his time and efforts. You will hear his narrative being about all of the things that we need to do to figure out how we create greater revenue streams, how we draw more students to John Carroll and how we find ways to operate more efficiently.”

Yet, the new administration may already be facing another controversy. Reportedly, members of the John Carroll community were troubled by the lack of community involvement in Miciak’s selection. There was no official presidential search conducted and no faculty involvement in the process, according to savejcu.org, a website created by John Carroll community members in response to the faculty handbook amendments.

“I recognize that administrative decisions are intended to be for the benefit of students, but I don’t really see much student input in making these decisions,” Aiden Keenan ‘22 said. “I also am upset with a lack of transparency with the transition. … Though many students put together the pieces that Dr. Miciak was to replace Dr. Johnson before the official announcement, I wish this plan was outright stated as well as general reasons behind the decision.”

John Carroll’s previous presidential search, which resulted in the appointment of the current president, Michael Johnson, used a formal search committee with representatives of both the faculty and the student body. Further, a review of The Carroll News archives found that every presidential transition in at least the last 50 years has used a formal search committee of some form, underscoring the irregularity of this most recent selection process.

According to Inside Higher Ed, “a successful search and leadership transition is vital to maintaining the momentum and success of the institution. What’s more, the search will be conducted, for the most part, in a very public arena where the reputation of the college or university will be on the line.”

The American Association of University Professors recommends that “searches for presidents and other chief academic officers should have an open phase that allows individual faculty members as well as faculty bodies to review the credentials of finalists, ask questions and share opinions before a final decision is made.” No such phase occurred in the process selecting Miciak.

Welki shared his thoughts on the university’s presidential appointment process and, while he reiterated his strong belief in the national search process to fill these positions, Welki also understands the decision was made based upon the current climate of the university.

“Right now the university, because of the pandemic and a variety of other demographic forces, is in a very challenging financial situation, so we really don’t have a lot of time to do things,” Welki stated. “The world is moving faster than we’re moving internally, so what we need to do is position ourselves and pivot as quickly as we can to, sort of, address and solve these particular challenges that we face.”

Multiple other faculty members declined to comment on the search process, citing advice from an attorney representing the faculty.

Regardless, Miciak emphasized his excitement for JCU’s future and his time as its president.

“My message is that it’s an honor to serve as the 26th president. I pledge to do that with integrity and honor in serving all of our students, faculty and stakeholders. I ask for everybody’s help and support and pledge my support to them.”