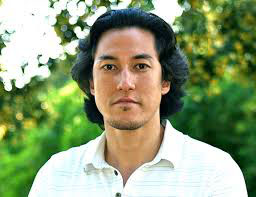 Paul Chappell did not begin his life as an agent of peace. That part of him did not step forward until he was an adult, until he had experienced true destructive thoughts and found the strength to not act.

“I also grew up with strong feelings of alienation because my mother’s Korean and my father’s half white and half black, and I grew up in Alabama. … All that rage and trauma caused me to develop a mass shooter personality in high school. Everyday I would fantasize about shooting the kids in my classes,” Chappell said.

Now, Chappell is an international peace educator and serves as the peace literacy director of the Nuclear Age Peace Foundation.

Philip Metres, director of the John Carroll Peace, Justice and Human Rights Department, supported Chappell’s view that people need to be taught about peace. “Some of you,” he began, addressing the audience in his introduction, “may be thinking that the very idea of peace abstracts you, that it doesn’t necessarily have any utility in your life or in your future profession, but one of the reasons I brought Paul here today is because he’s going to prove to you the exact opposite – that it’s actually essential to our human being and essential to our purpose making, and will be essential to you in your professional lives as well. No matter what you do, being able to interact with others, being able to reduce conflict, to negotiate, to empathize with others, are things that are going to make you more powerful in whatever you do. Not less powerful.”

Chappell ascended from a destructive personality to an understanding of what it is that human beings truly need to exist. He discovered this through his difficult childhood, attendance of WestPoint academy and subsequent service in the military, from which he left active duty as a captain. His experience enabled him to fully understand the flaws in what we, as a society, consider important and put emphasis on.

These “essential” things are food, water and shelter, a view that is consistent with common thinking and Maslow’s hierarchy of needs.

Maslow’s hierarchy of needs places food, water and safety before purpose and meaning, a decision that, Chappell asserts, is flawed.

“I taught a workshop in Northern Uganda, where people had lived through a really terrible civil war, and I asked them, ‘What is most important for humans, food or purpose and meaning?’ Every person said purpose and meaning,” said Chappell.

To support his claim, Chappell cited multiple examples that most people are familiar with. One such example was Hollywood personalities’ tendency to fall into scandals revolving around substance abuse or mental problems. Those people are society’s elite. They have everything. And, yet, they are still plagued by some sort of dissatisfaction.

Chappell attributes this to a lack of purpose. If you have food but no purpose and meaning, you won’t want to eat, Chappell said. You might say that if you deprive every person of food they would perish, but the same is true of depriving people of purpose and meaning. “We are the only species of the planet that can have food, water, safety, shelter, freedom and good health and we can commit suicide,” Chappell said.

Most schools do not teach children how to find purpose and meaning in life. Chappell claims that this cannot continue, and that understanding how to act in a peaceful way and find fulfillment in life is a necessary component of the human condition that must be revealed to all people, especially young people.

Chappell concluded his presentation by presenting the audience with three peace literacy skills: Listening, leading by example and speaking to people as if they have worth. If we do these three things, Chappell says, we can give people the fundamental material they need to function as human persons.