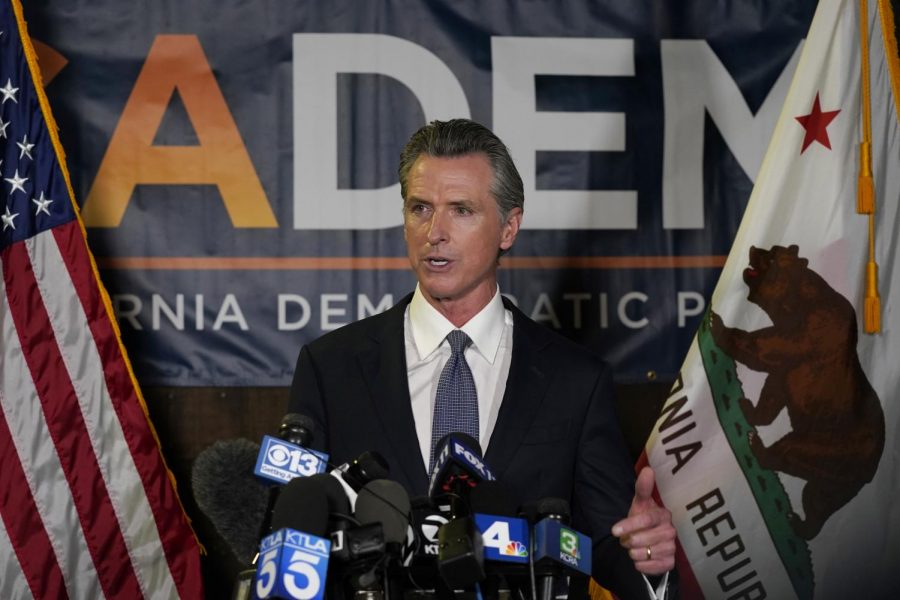 California Gov. Gavin Newsom addresses reporters after beating back the recall attempt that aimed to remove him from office, at the John L. Burton California Democratic Party headquarters in Sacramento, Calif., Tuesday, Sept. 14, 2021.

After months of struggle, the Republican-led recall California election failed to replace Gov. Gavin Newsom. The recall gained early momentum amongst Republicans due to policies pushed by Newsom during the early stages of the COVID-19 pandemic. Those in favor of the recall view the policies of the mask mandate as hypocritical and the inability to reopen schools as a submission to the teachers unions. For months, the Republican effort seemed promising in the polls. Dozens of Republican candidates, including Larry Elder, prominent radio show host, had entered the race bidding for the highest office in the Golden State.  However, with the help of prominent Democrats, such as President Joe Biden, Newsom spent millions of dollars in recent weeks to protect his legacy and fight the recall.

Mail-in ballots were sent out last month with Sept. 14 being the last day for Californians to place their vote. National Public Radio reports that the voters were asked two different questions: should Newsom be recalled from office, and if Newsom is recalled, which candidate should replace him? Had Newsom received less than 50 percent of the vote for the first question, he would have been removed and whoever had the highest share of the vote amongst the replacements would be the new governor. However, according to The New York Times, Newsom, at the time of this writing, received 63.9% of the vote and successfully avoided the recall. As reported by CNN, Larry Elder has admitted defeat and told supporters, “we may have lost the battle, but we are going to win the war.”

Colin Swearingen of the Political Science Department stated that, “In a recall, [people] have a choice on the status quo or taking a chance on something different.” He also added that “voters in particular are hesitant to change from the status quo. They are hesitant to take a risk. That is why incumbency can help, especially in a high profile race like this.” Unfortunately for Republicans, this was the case for Gavin Newsom, Californians did not want to change from the status quo and did not want to take a risk on someone so drastically different as Larry Elder.

This election was the second time a recall against a governor has occurred in California; the first was in 2003. Governor Gray Davis lost that recall effort, with 55% of voters in favor of removing him, and he was replaced with Republican Arnold Schwarzenegger. Larry Elder was the biggest name and most popular of the candidates that ran to remove the sitting governor. Elder is a famous  Republican radio show host and “a vocal supporter of former President Donald Trump.”. Recalls are very rare to occur and even more rare for them to successfully remove the incumbent.