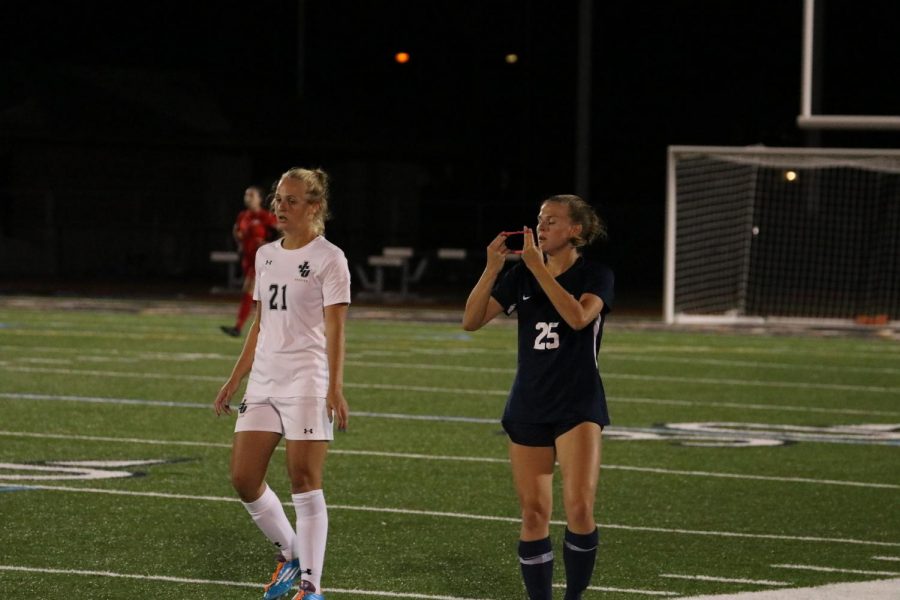 Bella DeCicco competing in a game for John Carroll University in the spring 2021 season. DeCicco's goal lifted the Blue Streaks over Washington & Jefferson in a 1-0 victory on Saturday, Sept. 25.

After suffering a tough loss on the road on Thursday, Sept. 23, the John Carroll University Women’s Soccer program recovered in their 1-0 victory against Washington & Jefferson College.

On Saturday, Sept. 25, the Blue Streaks headed to Washington & Jefferson for a non-conference matchup against the Presidents, an interstate showdown at Alexandre Stadium.

Despite a lengthy two-and-a-half-hour bus ride, the Blue Streaks showed no signs of road-trip fatigue. A gritty 90 minutes of play resulted in a 1-0 win for the Blue and Gold.  The victory came two days after a strenuous 7-0 loss against No. 10 Case Western Reserve University.

The first 45 minutes of play highlighted a powerful Blue Streak Defense, which only allowed two shots in the vicinity of goalkeeper Danielle DelGuidice ’22.

Backed by a strong defensive line, the Blue Streaks had opportunities to capitalize on offense, leading to a first-career goal for defender Bella DeCicco ’23, who put the Streaks up 1-0 in minute 41 of the showdown.

A clearance from the Blue Streaks’ back four sent a lofted ball to forward Ella Massaro ’24, whose possession paved the way for a roundabout sideline run and grounded cross by defender Taylor Woehbler ‘24.  Woehbler was credited with the assist to DeCicco, who poked the ball into the back of the net to put JCU up 1-0.

“I think that coming off of our last game and such a tough loss, we really needed a pick me up,” said Massaro. “I think we dominated the whole first half, and we just needed that goal for some security going into the second half.”

Despite a back and forth fight in the second half, a lone goal proved to be enough to keep the John Carroll Women’s Soccer team on top. Offensive performances from Julian Kontul ’23, Grace Monnin ’23 and Macey Malinky ’22 kept scoring chances brewing, while a continued brick wall of defense left the Presidents goalless.

The John Carroll Women’s Soccer team (5-3-1) looks to add another win to their record on Tuesday, Sept. 28 at 7:30 pm at Don Shula Stadium.  The Streaks take on a talented 8-1 Penn State Behrend team.