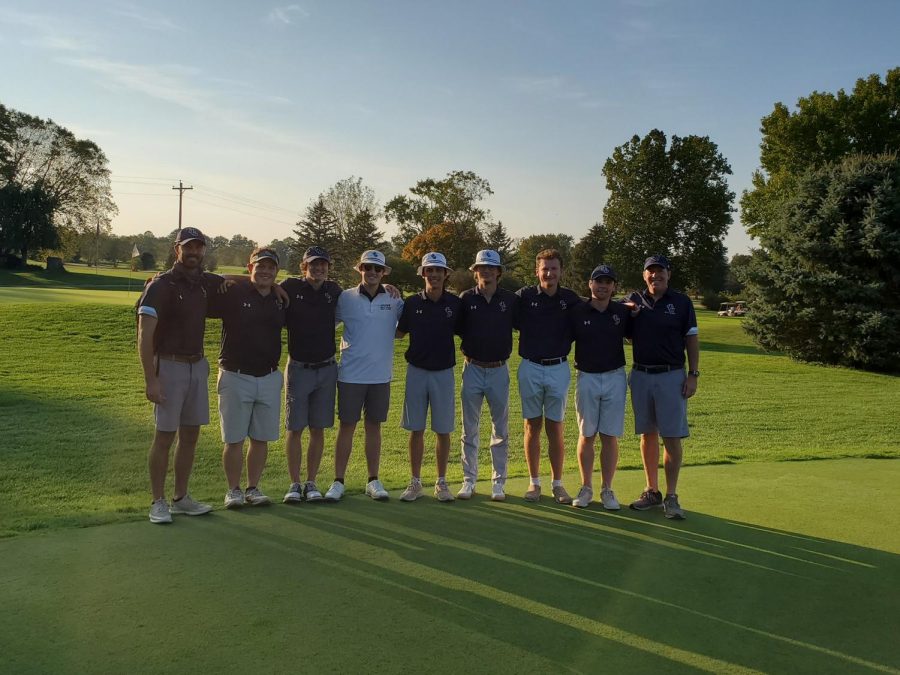 The JCU Men's Golf Team after capturing a first place finish at the OAC Fall Preview on Sunday, Oct. 10.

Competing at River Greens Golf Course against familiarly difficult competitors, the Blue Streaks led by 10 strokes after the first day of the tournament.

The Blue and Gold tallied a score of 288, an even par on the 18-hole, par-72 course, only six strokes off from breaking the school record of 282.

Jacob Hazen ‘24 led John Carroll going one under par on Saturday, followed by Johnny Roder ‘22 and Jack Wymard ‘23 who recorded even 72’s, and Zach Brinks ‘24 who tied for sixth with a solid 73.

Marietta College was the closest competitor to the Blue Streaks as they totaled 298 strokes after Day 1. Otterbein University (299), Capital University (302) and the University of Mount Union (302) round out the top five teams after the first day of competition at the OAC Fall Preview.

“It was nice having a comfortable lead going into the second day, but anything can happen out there, so we had to take it one hole at a time and not get ahead of ourselves,” said Roder. “We knew that the teams there had the potential to go low, so we had to stay focused.”

The second day began and the Blue and Gold started to feel the pressure.

John Carroll went 6 over par on the first nine holes as a team, as their lead started to dwindle over the other OAC opponents, but the Blue and Gold readjusted for the next nine.

The Blue Streaks recorded 10 birdies and an eagle on the final nine holes to reign in the victory at the OAC Fall Preview.

Roder capitalized on the second day, shooting a phenomenal score of 69 and finishing with first place honors with a combined score of 141.

FIRST [email protected] wins the OAC Fall Preview Tournament with a team score of 578! Johnny Roder wins medalist honors with a 2-day total of 141, including a 69 today!

A great weekend for the Blue Streaks 💪#GoStreaks ⚡️ pic.twitter.com/vyIeGja5Yd

Roder’s weekend performances crowned him as OAC Men’s Golfer of the Week.

Hazen finished in a fifth-place tie at the tournament, shooting three above his first day score, totaling to 145. He was followed closely by Wymard, who finalized a score of 146 after the two days.

“We knew going into this tournament that it wasn’t going to be easy, especially with Marietta and Capital playing well this season,” commented Roder. “Being able to come out with a win was huge for us and going forward it will only give us more confidence.”

The Blue and Gold have finished as the top contender in five of their six tournaments this season.

They will look to build on this success as they compete at the Denison Fall Invitational at the Cumberland Trail Golf Club in Granville, Ohio, on Saturday, Oct.16, and Sunday, Oct. 17, in the final tournament of their fall season.