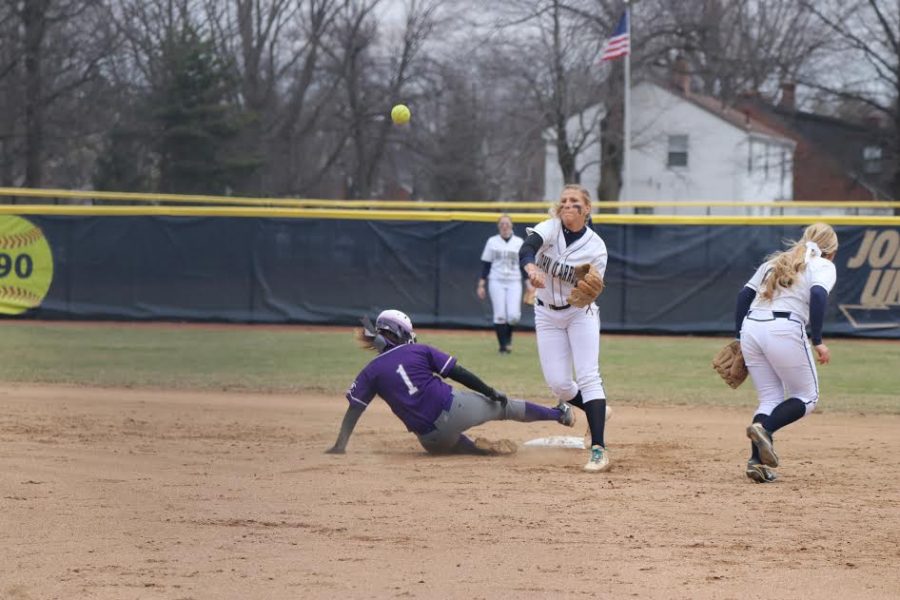 enior infielder Lindsay McKnight looks to turn a double-play in the softball home opener against Capital University at Bracken Field on Sunday, March 24.

The John Carroll University Blue Streaks women’s softball team opened up Ohio Athletic Conference play against Capital University with a double header at Bracken Field on March 20, splitting wins with the Crusaders in the two-game series.

In game one, senior Jessica Cook started off in the circle and pitched five innings, allowing five runs. Senior Elizabeth O’Grady and sophomore Madison Eagle came in for relief, and were lights out by not allowing any additional runs.

Offensively, JCU contributions came from familiar faces. Senior Lindsay McKnight had three hits and two RBIs; she also hit her second home run of the season, helping to push the team to victory.

Although the Blue Streaks were down 5-0 in the first inning, they still managed to end up on top. In the third inning alone, the Blue and Gold put up eight runs to make the lead 10-5.

Following the heat of the Blue Streaks’ bats, Capital was only able to get one run the rest of the game. This meant John Carroll won its OAC opener for the first time since 2013.

After her shaky start, Cook improved to 4-2 on the season. With the victory, head coach Nicole Loudin notched her 100th career win. Although game one had a high run count, game two against Capital was a different story. Junior pitcher Jenn Patterson went a full seven innings against Capital’s Brianna Reardon.

The teams were scoreless heading into the seventh inning, until Capital put two runners on with no outs.

Patterson looked for a way out by striking out two batters. However, when Capital’s Hannah Martin stepped up to the plate, she was prepared to get her teammates home.

It did not happen in the fashion that most would have expected, though. Patterson threw a pitch into the fence, plating two runs and giving Capital a 2-0 lead.

JCU attempted to answer back with McKnight’s homer, which cut Capital’s lead in half. The women worked to tie the game but, in the end, they did not have enough in the tank to collect a tally in the column.

Following the two games, JCU poses a 9-5 record overall and are 1-1 in the OAC.