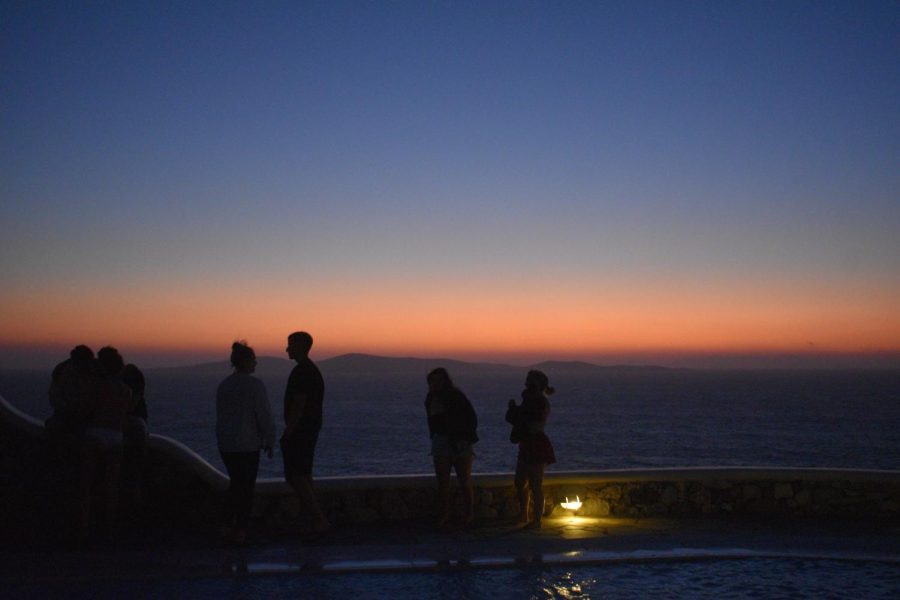 A sunset silhouetted by friends in Mykonos, Greece.

This week in my philosophy class, we were discussing nihilism. As we talked about it, many of my peers expressed feelings like, “Yeah I feel like nihilism is connected to depression,” or “That must be really sad to think like that, not believing in any meaning in the world.”

I was surprised to hear these comments, as I generally consider myself a nihilist. I don’t think there’s any real meaning in the world. I think we’re just put here, we behave like any other animal, and then we die. There’s no afterlife or anything. Just black screen, game over, that’s it.

Though this may sound depressing, as my classmates thought, I find it liberating. Whenever you play a video game, you’re transferred into a world where nothing really matters. You can go talk to whoever you want and do whatever you want (assuming the game lets you).

I’m not saying that we respawn or have several lives, but what I am saying is we have the opportunity to do whatever it is we want. We are only bound by the situations we are in. If you want to ask that guy you keep seeing out, you can do that whenever you want. If he says no, who cares? Nothing matters anyway. It’s not depressing, it’s freeing.

That’s not even to mention how brutally short life can be. Any day, you can be hit by a random speeding car, or a freak accident causes your unexpected death. There’s two possible reactions that we can have to the brevity of life: either say, “Life is really short, let’s make the most of it while we can,” or, we can say, “We really don’t matter in the grand scheme of things, we’re just random people.”

While my philosophy peers may believe nihilism focuses on the second reaction, I find myself grounded in the first.

Life is short and life is meaningless, but that’s okay. We’re granted the opportunity to generate our own meaning through it all. If you want to believe in the Catholic tradition, seek heaven and deny sin, then you’re granted the freedom to do that. It’s your reality, make what you want from it.

Although it may seem meaningless to me, that doesn’t mean that it is without morals. I’ve heard a few people say, “if nothing matters, then how do you orient your morals and values?” It’s simple. Here’s how the conversation plays out in my head.

“Does life matter to people?”

I believe wholeheartedly that our morals are based on the reactions of the people around us. If I’m rude to my friends, then they’ll stop talking to me, therefore it’s immoral to be rude to people. It’s that simple, and it doesn’t require a higher purpose to be concrete. If I know that something I do is going to make people upset, then I simply don’t do it.

Nihilism doesn’t have to be depressing. It can be seen as creatively building your own meaning for the world. We’re given a blank canvas to draw whatever we see as right and just in the world, and we can just live for ourselves and our interests, while considering the lives of others, of course. After all, life matters to people.