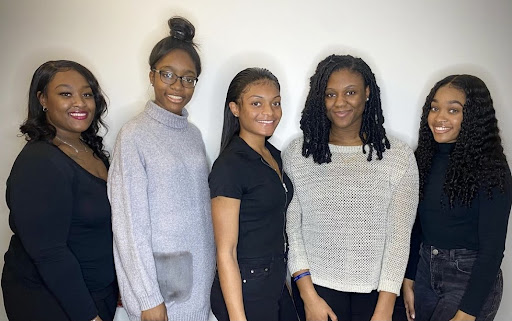 The board members of Black Students in Action for the 2021-2022 academic year celebrate the RISE art exhibit.

The Black Students in Action organization hosted the DE-MIL-I-TA-RISE art exhibition by the Dissenters movement in the Black Cultural Center during the week of Oct. 26.

“Dissenters is a movement organization leading a new generation of young people to reclaim resources from the war industry, reinvest life-giving institutions, and repair collaborative relationships with the earth and people around the world” as stated on their website.

“One of the main reasons we planned to do this [art exhibition] was because it has a lot to do with Civil Rights and it gives a way for people to know the BCC is there. It’s like a grand opening to the public.” Dontavia Winston ‘22, vice president of BSA, told The Carroll News.

The art displayed in the exhibit was created by artists from the United States, Mexico and Canada from an organization known as Justseeds. The organization uses their artwork as a representation of collective action and to make statements on injustices in society.

“For that to be in tie with the Black Cultural Center, it allows us to show what BSA and CSDI is about. It brings more awareness to things that people might not have thought to get more educated on,”  said BSA President Uchechukwu Ike ’22.

As the BSA membership increases, the organization aims to promote further visibility within the campus community. Also, they want to ensure equity and inclusion are continued to be a priority for all cultural student organizations at John Carroll.

BSA has a list of 10 ongoing demands that have developed over time. The demands address matters such as implementing specific procedures to the University’s Bias Reporting System, implementing a student-led diversity committee and simply demanding that the voices of Black students are heard on campus.

The most recent demand that was met by the University was the designation of the Black Cultural Center in the DJ Lombardo Student Center in the fall of 2020. The BCC is now in use for meetings and events this semester.

Autumn Hale ‘22, who serves as the marketing chair of BSA, elaborated on the importance of recognizing the progress made through the years while also acknowledging the work that still needs to be done. “The fact that [the demands] are getting answered shows that we are being heard and seen on campus.”

By the end of Ike’s senior year in Spring of 2022, she would like to see two demands met by the University. “The mindset of this John Carroll community, as well as for the voices of underrepresented students to be heard and actually taken care of instead of brushed under a rug or people get passed off for a warning for any harassment done to students of color,” said Ike.

When it comes to looking ahead to the future of BSA, the returning adviser of the organization, Kenneth Chaplin, has many future goals and aspirations for the organization.  “I would like to see Black students at John Carroll connected to more students of color, particularly at Jesuit institutions,” said Chaplin. “There are 28 universities, some of them very prestigious, such as Gonzaga, Loyola, Chicago, Boston [college], Georgetown. They are very powerful, well-known institutions that also have Black students.”

Chaplin said that he is hoping for “an intercollegiate network and relations that can help them [students of color] development both in and beyond John Carroll.”