Twenty One Pilots sells out Nationwide Arena in hometown show 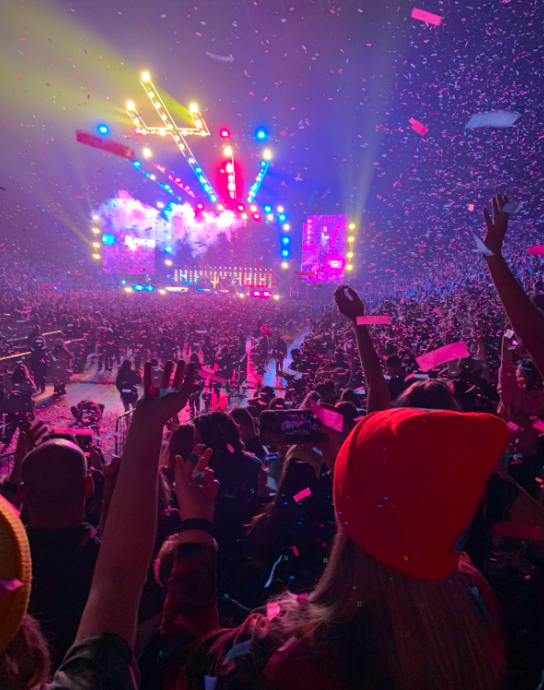 Pink and blue confetti rains down upon the 20,000 fans filling Nationwide Arena.

The Columbus-based duo “Twenty One Pilots” returned home for one of the last cities on the American leg of their “Takeover Tour.” Before heading to Mexico and then Europe, lead singer Tyler Joseph and drummer Josh Dun took the stage of Nationwide Arena in Columbus, Ohio three times across four days to entertain 20,000 fans during their sold-out shows.

Despite having several tours in previous years, this year has been different for the band. Not only is this the first national tour since the coronavirus pandemic, but it is also the first time that the duo has included other artists on stage for an extended period of time. “Scaled and Icy”, the band’s sixth album, ushers in an era of 80s vibes, positive beats and high-energy hits.

In celebration of their 2021 album, “Scaled and Icy,”  the band has been touring since September. Before taking it international, the Pilots took their show to Atlanta, Columbus, Boston and other cities across the United States. Selling out most of these stadiums, Tyler and Josh maintained high-energy shows throughout this tour. These shows are part of the reason they’ve won three AMAs, been nominated for six Grammy’s or won two MTV Video Music Awards.

In regards to the concert itself, though, this one was definitely different. Not to sound like too much of a “stan,” but this is the fifth time I’ve seen the band and the third tour that I’ve been to. A Twenty One Pilots concert is always a ton of fun but definitely had the most laid-back aspect compared to the other four shows. At my first two, one of the bandmates went out on the general admission pit in a human-sized hamster ball, the singer performed a speedy transition from the stage to the nosebleeds, and more pyrotechnics were used. During the third and fourth, a fake car was set ablaze during the show, the bandmates crossed a bridge of spotlights in the middle of the show that descended from the rafters, and Tyler again performed that “teleport.”

During this tour, the bandmates still brought the stage-breaking components. Tyler and Josh always close the show by standing on platforms supported by fans in the pit while playing the drums to finish their song “Trees”. Tyler always climbs a tall tower above the sound system in the back of the pit during “Car Radio”, and Josh did his classic backflip on stage as Tyler leaped off the piano.

This time, the bandmates also performed a little bit of an acoustic set during the show. A fake campfire was lit in the middle of the stage as Tyler played the ukulele, Josh drummed along on a wooden percussion box and the supporting band calmly played their instruments. Including hit covers such as “Home” by Edward Sharpe and the Magnetic Zeros, “Benny and the Jets” by Elton John and the introduction of “Low Rider” by War.

The concert was on Oct. 30, a pretty important day for Columbus residents and other fans of Ohio sports; the Ohio State versus Penn State game was being played at the same time as the concert. A few times throughout the show, Tyler spoke directly to the audio/visual director and asked him to put the game on the big screen for a moment in between songs. The band was surprisingly well-timed in requesting this, showing a nearly 60-yard pass play from Ohio State quarterback C.J Stroud to wide receiver Austin Mack and two field goals.

Halfway through the show, I made an interesting connection to the third time I saw this band. I’m a senior now and looking forward, though hesitantly, to whatever comes next after JCU. This October has been a busy one; I’ve had homework, co-curricular activities and I am in the process of applying for law school. Interestingly enough, I saw Twenty One Pilots in October of my first-year at JCU. I’m in a very similar spot to how I was then; unsure of what was to come, but looking forward to the changes and growth that were coming through. The idea of growth within — or almost even in spite of — fear is prevalent in “March to the Sea”, “Stressed Out”, and several other hits.

Though they change from year to year, a Twenty One Pilots concert never fails to impress. Crowds camp out nights early for a chance at front row, people lose their voices from yelling and fans fill mason jars with confetti from the shows for decorations. Originally from Columbus, Tyler and Josh spoke on stage after receiving their first Grammy about their humble origins and small beginnings. Now, they sell out international tours and had a street renamed after them in their hometown for a week. Writing his first songs from his family’s basement, Tyler began a band that now sells out international concerts with a simple reminder.

“Anyone from anywhere can do anything.”