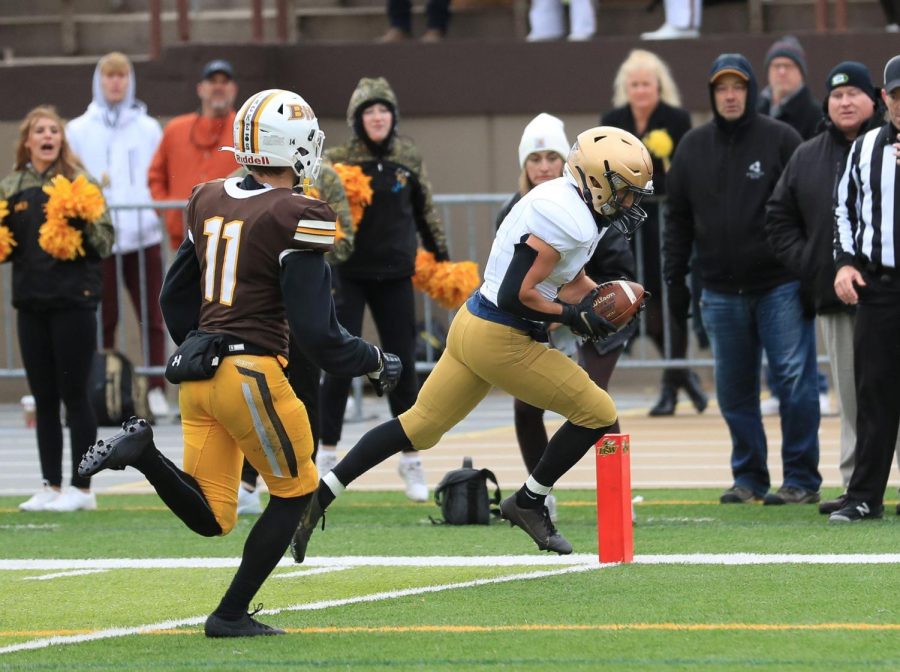 The Rock will stay with the John Carroll University Football Team, as the Blue Streaks edged out the Baldwin Wallace Yellow Jackets 29-28 in a fourth-quarter thriller.

Despite the bone-chilling weather, the Blue Streaks traveled across Northeast Ohio to Berea, Ohio for their season finale against the Yellow Jackets on Saturday, Nov. 13. The Yellow Jackets came into the battle with an 8-1 record and ranked 20th in the nation, with their only loss coming from the Division III powerhouse Mount Union Purple Raiders.

Even with a slow start on offense for both teams, John Carroll’s wide receiver Brennan Fugh ‘23 accounted for over half of fifth year quarterback Jake Floriea’s passing yards, as he would total 12 catches for 144 yards.

“Everyone came together and played for the seniors,” said Fugh. “We knew it was a big game going into it but all of us underclassmen wanted to play our hearts out for the seniors on their last game. Throughout the week we practiced loose and just had fun, so we just wanted to leave everything out there on that field for the seniors that have been here 4 or 5 years and did everything to help this football program during their time here.”

The scoring drought came to an abrupt stop for Baldwin Wallace in the second quarter with a 32-yard touchdown from wide receiver Darius Stokes, delivered by quarterback Keagan Armitage. Armitage was not done, as he would rush for a touchdown and connect with Iyan Mitchell just before the conclusion of the first half to take a dominant 21-3 lead into the second half.

John Carroll was unable to keep up on offense, as they would eventually find the endzone midway through the third quarter when Floriea found Devin Limerick ‘22 to make the score 21-10.

But the tides quickly changed in favor of the Blue Streaks, thanks to a surge of offense from running back Evan McVay ‘25 and the Blue and Gold’s lockdown defense.

“All I could think about was not giving up The Rock after eight consecutive years in our possession,” said McVay. “We started finishing drives and held them to just 7 points in the second half, which helped us pull in range of a victory”

McVay would go on to score two touchdowns in a four-minute span, as he would punch in a touchdown and receive a 33-yard touchdown from Floriea to cut the lead to six.

With another stop on defense, the offense regained the ball with minimal time in the competition.

In a miracle effort, Joey Torok ‘23 caught a 25-yard touchdown to tie the contest at 28-28. After a successful extra point attempt from kicker Grant Gonya, John Carroll took a 29-28 lead with 45 seconds left.

“On the play that we scored I was honestly just so happy for the seniors,” said Torok. “Being able to make a play for them was such an amazing feeling and definitely something I’ll never forget.”

The Yellow Jackets failed to march down the field far enough for a field goal, resulting in a John Carroll victory.

John Carroll completed their season with a 7-3 record, with key OAC victories over Marietta, Ohio Northern and Muskingum.

As for next year? The future looks bright, according to McVay.

“We will have a new quarterback but have many playmakers around whoever it is, and a defense that is traditionally solid,” stated McVay. “Expect a playoff run from Team 100.”