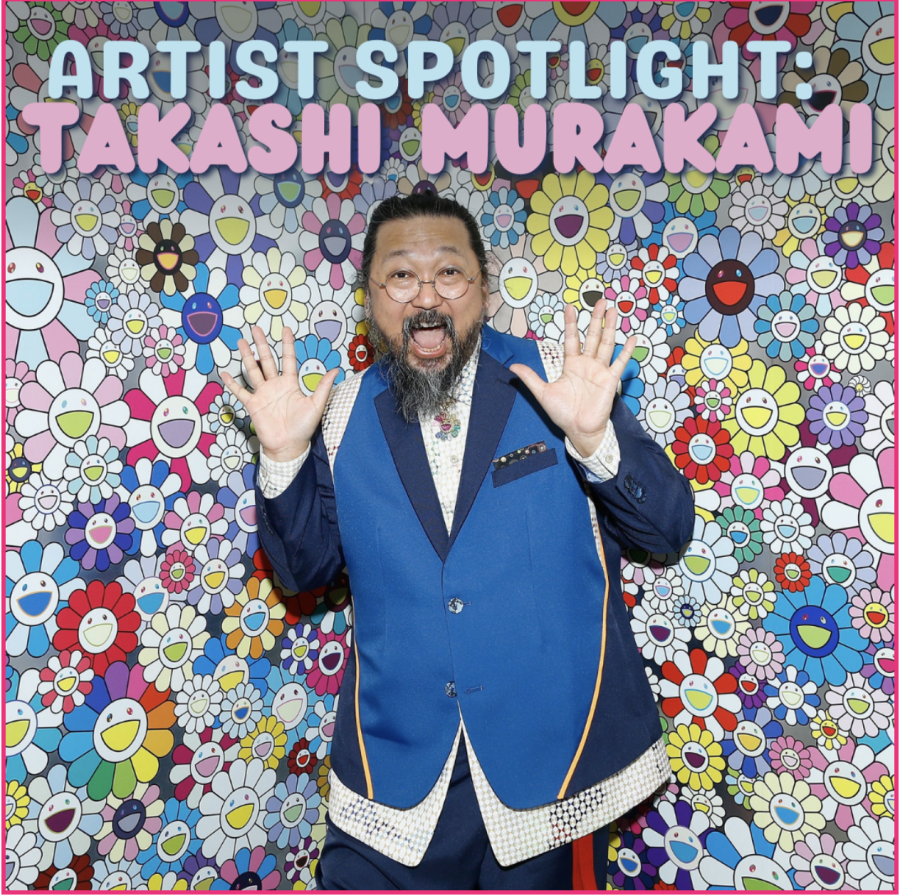 Kevin Oliver does a deep dive on the artwork of Takashi Murakami.

Tan Tan Bo: an abstract bear-like creature accented with acrylic strokes of blue, black, red, pink, yellow and white with a large grinning black smile. Circular fluid-like shapes encompass it along with droplets of these colors and ones in between that fall down its face, contrasted by  color submerging on each side. A bright pink solar system-esque eye juxtaposed by a plain white eye. These elements come together to give this work nearly a chaotic feel. This character is simply a glimpse into the ethereal mind of contemporary artist Takashi Murakami.

Murakami was born in Habashi City, Tokyo to a taxi driver father and a homemaker mother. His mother’s studies of needle print and textiles sparked a young Murakami’s interest in the art world. Living in a Japan still in its revival phase after the events of WWII, he felt a western influence on himself alongside his Japanese roots that manifested itself in his activities. These activities ranged from attending Buddhist rituals and taking Japanese calligraphy courses to visiting museum exhibitions of famous artists like Pierre-Auguste Renoir the painter and Francisco Goya the printmaker. Even at such an early time in his life Murakami knew what he wanted to pursue.

Murakami completed basic schooling and later studied nihonga, a Japanese painting style with elements of Western art, at the famous Tokyo National University of Fine Arts and Music. Here he honed his skills in both painting and animation. He started this education in 1980, completed his master’s degree in 1988 and completed his doctoral in 1993. His schooling put him on course to being able to make the abstract artwork he’s capable of today.

Murakami developed his signature Murakami Flower in 1995 that is prevalent in many of his works, along with similar elements of it. On the surface, it seems like a bright smiling plant full of colors, but upon deeper inspection you can identify the droplets in its eyes are actually tears. This is no coincidence; the tears were inspired by his journey to New York years prior where he described himself feeling an intense form of homesickness. A feeling of contradictory emotions is something Murakami was especially familiar with after growing up in a Japan recovering from war. The flower design is Murakami’s interpretation of a Snow Moon Flower, which is a tenet of nihonga. This flower is synonymous with Murakami himself, an intriguing blur of high and low arts.

More recently, Murakami has been doing collaborations with musical artists and pivoted into the fashion scene while still maintaining his presence in the art world. One of the most prominent artists he has worked with is Kanye West. This collaboration came in the form of West’s “The College Dropout” and directing his animated “Good Morning” music video. Additionally, he created the “Kids See Ghosts” cover, a collaborative album by West and Scott Mescudi. Furthermore, Murakami joined forces with Billie Eilish to produce an animated music video for her song “you should see me in a crown,” using his signature striking vibrant visuals and flowers. In the fashion scene he’s worked with brands like Vans for shoes and skateboards all the way to his over a decade-long collaboration with Louis Vuitton that spawned numerous clothing lines and shoes inspired by his work. Murakami has been keeping up with his traditional art expression as well, hosting multiple exhibits throughout the years, one of the more recent being “In Tune with the World” in 2018 in Paris that was a more philosophical look into the way humans interact with the world, highlighting the connections between the two through art. It featured Tan Tan Bo.