Blue Streaks stay winning away from home with twin-bill 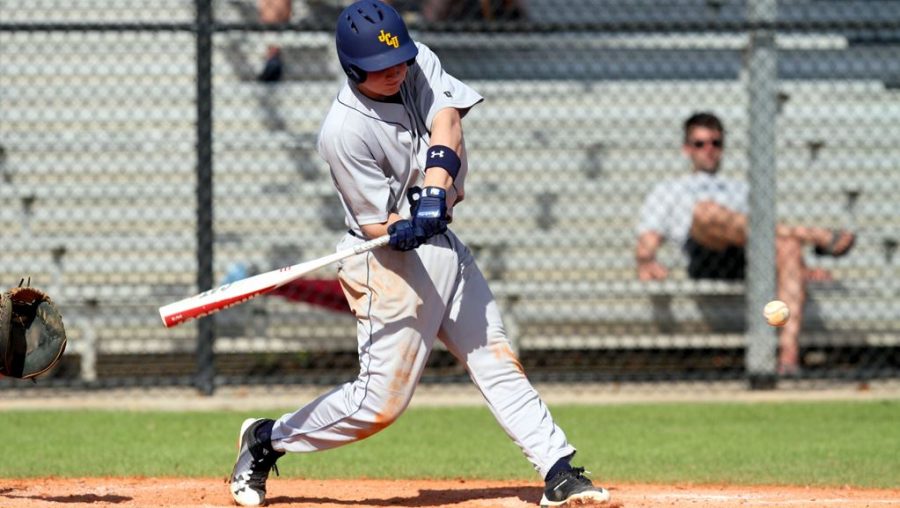 The John Carroll University baseball team (or perhaps to some, The Road Warriors) swept the Muskingum Fighting Muskies April 6 to stay undefeated in the Ohio Athletic Conference.

JCU had not felt the comforts of home all season, having played all 21 games on the road and heading in to a scheduled trip to New Concord to take on the Fighting Muskies.

All the unplanned travel and schedule changes did not slow down the Blue Streaks, as they came into the contest with an overall record of 15-6 and a 4-0 record  in conference play.

In the first game of the double header, the JCU offense was helped significantly by errors committed by the Fighting Muskies. Only two of the 10 runs put up by the Blue Streaks were earned.

The Blue and Gold took advantage of an early error to take an early 1-0 lead as senior Dominic Mittiga turned a single in to an inside-the-park home run  thanks to the errant Muskingum defense.

In the second inning, the Blue Streaks added five more runs and never looked back. The offensive  explosion was powered by RBI singles by Mittiga, and fellow seniors Derek Penman and Patrick Keohane.

JCU would add two insurance runs before the Muskies would respond to make the score 8-3. The Blue Streaks’ pitching staff shut down the Muskies on just two hits the rest of the way.

The Blue Steaks’ final two runs came on a sacrifice fly by Keohane and an RBI single by junior Aaron Zawadzki. Offensively, Penmen was totaled a team-best three hits in four at-bats. Additionally,  Keohane, Mittiga and Zawadzki each had two hits.

On the mound, sophomore Duncan Cooper was dominant, earning the win to advance his record to 2-1 on the season.  Fellow sophomore John Merrill notched the save for the Blue Streaks, recording five strikeouts in the process. That save marks the first of Merrill’s career at the collegiate level.

In game two, the offense started fast once again. The Blue and Gold jumped out  to a 3-0 lead, thanks to an RBI single by Zawadzki. A fielder’s choice by freshman Justin Hanley and an RBI single by sophomore Sam Heaton gave John Carroll a 3-0 lead heading into the third inning.

After the teams traded runs to make the score 5-2 after four innings,  JCU broke the game open with a three-run home run by Hanley, making the score 8-2 in favor of the Blue Streaks.

The Fighting Muskies cut the deficit in half (8-5), but the Blue Streaks added a run on a sacrifice fly making the final score 9-5.

Freshman Nate Wenson went seven innings to get the win, improving to 3-1 on the year.  The double-header sweep improved the Blue Streaks’ conference record to 6-0 for the first time in program history. JCU concluded the day with  a 17-6 overall record.

Due to poor fielding conditions involving sinkholes in the outfield at the Blue Streaks’ home territory, Schwikert Field, John Carroll will play the remainder of their season away from University Heights.

Their first two “home games” of the season came at Kent State’s Schoonover Stadium on Tuesday, April 9, where the Blue Streaks defeated Heidelberg 14-0 in game one and dropped game two 12-4.

Next up, the Blue and Gold will host the Ohio Northern Polar Bears on Saturday, April 11, at 1 p.m. and 3:30 p.m. in double-header fashion at a site yet to be determined.