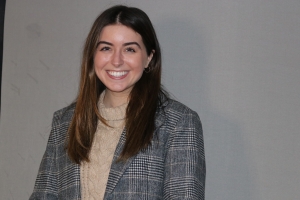 President Margaret Skubik tells The Carroll News her hopes and plans for the rest of her term.

On Nov. 16, Margaret Skubik ‘22 was sworn in as president of the John Carroll Student Government. Her rise to the presidency followed the impeachment of previous president Matthew J. Meyer under terms of dereliction of duty and election tampering. As of now, Skubik’s previous seat as vice president will remain unfilled, but, she notes that Vice President-elect and current Student Government Chief of Staff Jacob Kozlowski will be assisting her throughout the remainder of her term which ends in January.

Skubik is a communications and political science double major and serves as an intern at The Cleveland Magazine. She originally joined student government her freshman year and has held the same goals for the community since.

“Coming into John Carroll, I did not know a single person,” Skubik told The Carroll News. “I’m from a small suburb of Detroit and most of my friends went to the University of Michigan or Michigan State for college. No one had heard of John Carroll nor understood why I would choose to go. But I felt an urge to not only make this place my home, but make it feel like home for others as well. I ran for Student Government as soon as I had the opportunity to my freshman year and became dedicated to building connections with those around me and making change where needed.”

During her freshman year, Skubik chaired the community relations and service committee as a self-described “quiet, soft-spoken leader” with “compassion, understanding, and open-mindedness.” Now, she has aspirations for the rest of her short term as president. She advocates for the health and safety of others under the principle of being men and women for others. She also hopes to discuss the decoupling of academic scholarships with University  leadership. Her main goal currently is to “curate an even more welcoming and supportive environment for students who may feel unheard or underrepresented.”

“I want other shy freshmen who maybe felt voiceless or unsure of their place in this community to feel more comfortable and more empowered,” said Skubik. “That goal remains the same for me, I want this community to know me as an approachable, open-minded and positive person who will put their needs and the needs of this university above all else. To quote the notorious Ruth Bader Ginsburg, ‘Real change, enduring change, happens one step at a time.’ Though there is only a month left in this term, a lot needs to be accomplished especially to ensure a smooth transition for the 2022 Senate and Executive Board.”

In some of her first acts as president, Skubik opened Senate vacancy applications to the senior class and plans to hold a “town hall meeting” for the community at the end of the semester.

“I am very thankful for John Carroll and the opportunity to serve the student body and make change where needed,” Skubik stated. “I am confident that the next administration will ensure that such voices are heard as well.”