The Carroll News • May 1, 2019 • https://carrollnews.org/1932/sports/john-carroll-baseball-celebrates-seniors-with-hard-fought-split-against-marietta-in-critical-oac-matchup/ 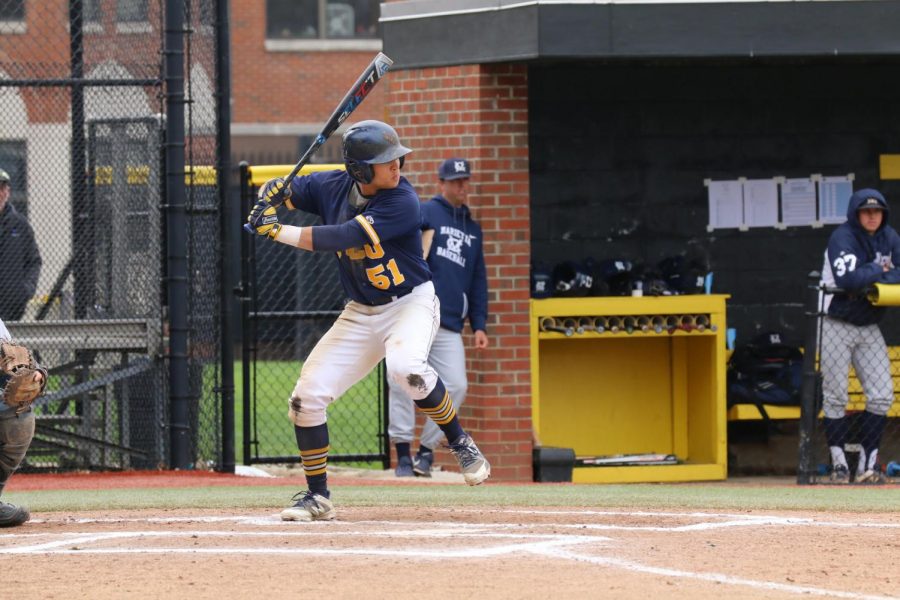 Senior Patrick Keohane readies up for a hit on senior day against Marietta at Schweikert Field on April 27.

There’s no place like home, and John Carroll University’s baseball team had not seen much of their home field heading into the week of April 21. Until that point, the Blue Streaks had played 26 of their first 30 games away from University Heights.

The Blue and Gold finally had a week in which they did not have to leave campus due to poor field conditions at home. They played four consecutive games on their home turf, Schweikert Field. After splitting the first two games of the home stand — against Denison University on April 23 and Oberlin College on April 24 respectively — JCU matched up with Marietta College on April 27.

Against the Pioneers, the Blue Streaks honored the senior class before a critical matchup that would go a long way in determining the postseason prospects of  both teams. The senior class of Derek Penmen, John Bondi, Carter Semancik, Nate Weston, Dom Mittiga and Patrick Keohane were all honored for their accomplishments in their careers as the Blue and Gold. The seniors were major contributors offensively in the first game.

With freshman Mitch Midea taking the hill for the Blue Streaks and keeping them in the game early on, it was up to the seniors to provide an offensive spark. Junior Aaron Zawadzki drove in Penman, as JCU took the initial 3-2 lead. Marietta quickly responded and tied the game at three runs apiece.

The lack of concentration on the defensive end proved costly for JCU, as they had four errors that allowed Marietta to take a 7-3 lead.

The senior class attempted to rally the Blue Streaks in the ninth. Keohane started off the inning with a single to finish game one 5-for-5. Penmen then hit a single, and Mittiga came through with the huge triple to score his senior classmates and cut the deficit to 7-5.  JCU could not get any closer offensively, so they lost game one by a score of 7-5.

Sophomore Andrew Steele took the mound for JCU in game two and he would live up to his last name. as he had a backbone of steel throughout the game. Steele bent but didn’t break as he allowed 10 hits but only one earned run. However, defensive mistakes meant that he left the game with Marietta leading 2-1 in the seventh inning.

JCU loaded the bases and, after a strikeout by junior Joe Charpentier, sophomore Mike Anderson drew a walk that tied the game at two.

Aggressiveness on the base paths helped John Carroll take the lead, as Mittiga walked and then stole second base to force Marietta to intentionally walk Zawadzki. Junior David Ferguson then came up with the big hit down the left field line that scored Mittiga and gave the Blue Streaks a 3-2 lead.

The JCU defense held Marietta to no additional runs, thanks to the efforts of sophomore pitcher Nicholas Michel, who secured the victory with a three-up, three-down inning in the ninth.

The Blue Streaks notched a 3-2 victory and split the OAC double header, leaving John Carroll in third place in the OAC. John Carroll finished the day with a record of 22-12 ( 9-5 OAC.)

JCU currently sits in third place in the conference as they look to secure a spot in the top four and advance to postseason play. The Blue Streaks now have four conference games remaining, including doubleheaders with Baldwin Wallace and Otterbein