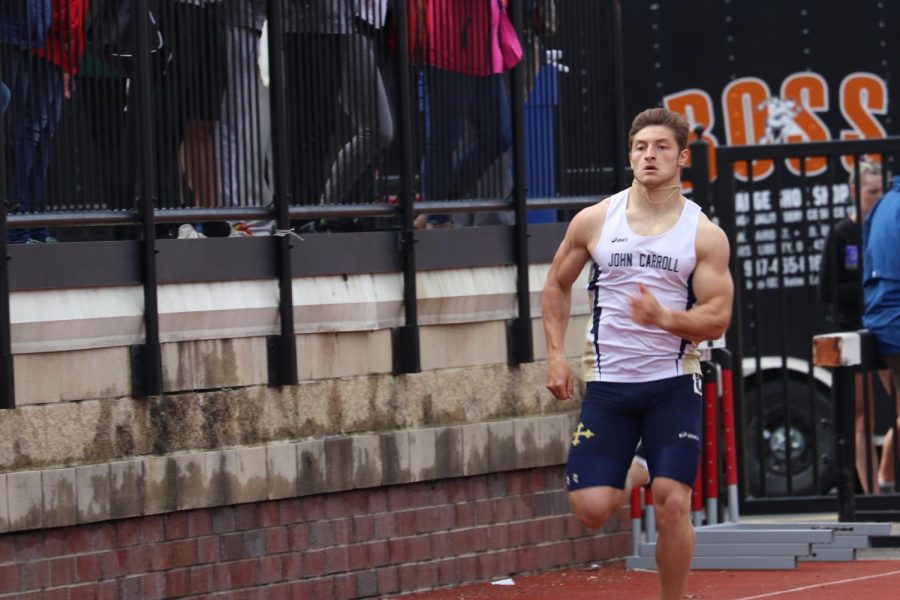 Sophomore sprinter Bobby Fogle races around the track at Otterbein University in the OAC Championships held in Westerville, Ohio.

For the fourth time in seven years, the John Carroll University men’s track and field team was the runner up at the Ohio Athletic Conference championships. While winning the OAC championships was the ultimate goal, the Blue Streaks still set a program record of the most points scored in a meet.

Both senior Hayden Snow and sophomore Deven Ward contributed mightily to the Blue Streaks’ point total. Starting in the 100-meter dash, Snow finished in 10.83 seconds, achieving second place. He was just two hundredths of a second behind the winner. Ward finished with a time of 10.91 seconds and took third. The final John Carroll placer in the 100 was senior Cole Werich, who took fifth. Snow then finished first in the 200-meter dash, and Ward took fourth.

John Carroll had plenty of other scorers on the day. This included senior John Iannetta, who took seventh in the 400-meter hurdles. In the 3,000-meter steeplechase, freshman Ian Pierson took fourth place and junior Patrick McGuire took eighth.

The Blue Streaks won both the 4×400- and the 4×800-meter relays. The 4×400 team was composed of Iannetta, Fogle, and freshmen Mark Zahren and Mike Shipman. They defeated the Purple Raiders of Mount Union by a full second. The 4×800 team — which included Shipman as well as fellow freshman Gabe Ernest and seniors Zach Modzelewski and Kyle Monahan — defeated the Purple Raiders by a second and a half.

In the long jump, the champion and the runner-up were both Blue Streaks. Snow and Ward took first and second respectively, jumping 7.45 meters and 6.91 meters. Freshman Corey Minton took fifth in the Long Jump by jumping 6.60 meters, and he also won the Triple Jump by jumping 13.96 meters.

The Blue and Gold’s season is far from over as they have five events remaining on the 2019 slate before the NCAA Outdoor Championships. JCU will be back in competition next weekend at the Dr. Keeler Invite hosted by North Central.