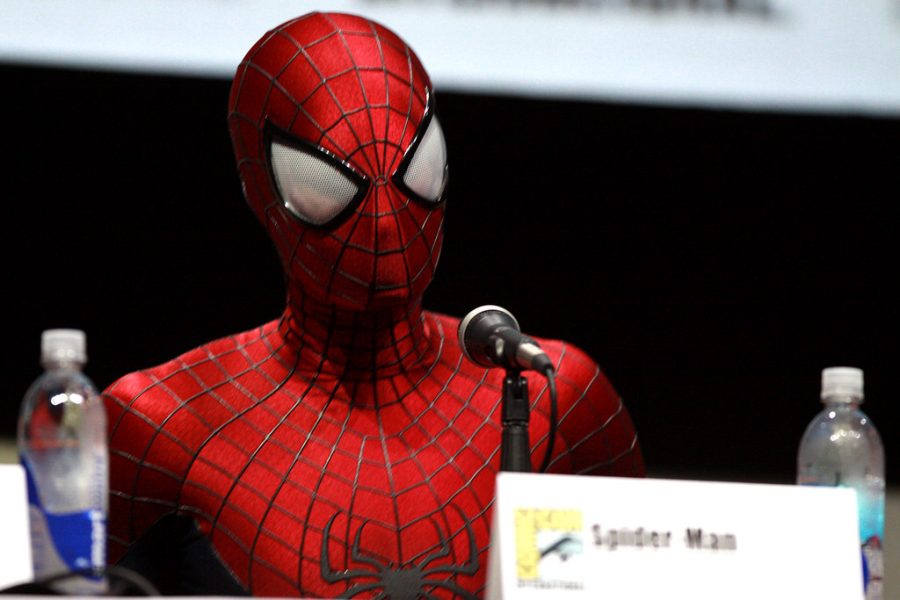 Andrew Garfield, in his Spider-Man costume, speaks at a panel at the 2013 San Diego Comic-Con.

Undoubtedly, the Spiderman saga has received a revival after the release of Marvel’s Spider-Man No Way Home in December 2021. The blockbuster film shattered box office records surpassing other superhero giants like Black Panther and rivaling tyrants like Endgame earning over $1.1 dollars worldwide. On the day of its premiere, #NoWayHome trended number one on Twitter with millions discussing the film and praising the twists and turns that took theaters by storm. However, with all of the positive comments that have come with No Way Home, people naturally wanted more from the franchise.

One of the hot button issues produced by the movie was a discussion on the previous Spiderman franchises, both Sam Raimi’s Spider-Man trilogy and Marc Webb’s The Amazing Spider-Man series. With Tobey Maguire and Andrew Garfield each making monumental appearances in No Way Home, audience members have revisited their respective films along with the controversies that caused their abrupt end.

Some conversation circulated on the original Spider-Man movies and the lost plans for a Spider-Man 4 featuring Tobey Maguire fighting Dylan Baker’s take on the iconic villain Lizard. Reportedly, the movie was scrapped after a snap decision from Raimi and the tanking reviews of Spider-Man 3. However, most of the debate that surfaced regarded the bygone project for The Amazing Spider-Man 3 which was meant to rehash Spider-Man 3’s plot of Garfield’s Spider-Man facing his darker half because an infection from an alien symbiote (what we know as Venom) while also battling The Sinister Six. Yet again, the prospective 2016 film was trashed after plot development because of reviews from the previous film.

With the reemergence of Maguire and Garfield in their Spidey suits combined with further analysis from viewers, fans began to critique Hollywood for cutting Garfield’s Spider-Man before he finished his trilogy. While some backlash was concentrated on the slash of Spider-Man 4, most focused on The Amazing Spider-Man 3 because Garfield’s career as a hero was cut shorter than both Maguire and now Tom Holland. Within hours of No Way Home’s release, #MakeTASM3 trended number one on Twitter worldwide. This all occurred despite the toxic reviews of the franchise’s story and Garfield’s debatable acting style. Yet, the hashtag was crawling with both Marvel fans and skeptics who all seemed to reach a consensus: Garfield should have a third movie regardless of the previous film’s records.

The synopsis of the issue is that, while fans despised The Amazing-Spider-Man saga when it first premiered, they now flock to and protect the series. Flatly, they did not realize what they had until they saw its true potential and now either regret or ignore their past negative feelings.

While the “you will never know what you have until it’s gone” trope can be applied to many topics, we see it clearly with both Garfield’s Spider-Man and the current political spectrum.

While this comparison may seem far-fetched, the connections are easily made. Just like how viewers pleaded with Garfield to return to the screen adorned in the red and blue suit, Democrats cried for center-left politicians after they shunned them in the past.

After Barack Obama finished his last term in office in 2016, the blue party called for intense change. This led to the candidate selection of Hillary Clinton who was dubbed far left because of her views on tax reform, civil rights and issues of the like. Many Democrats high up in the party administration said that Obama simply did not do enough and there needed to be drastic alteration. However, because Clinton was so polarizing, she lost the race to Donald Trump who, at the time, was not seen as the far-right politician he is today.

Under the reign of Trump, Democrats realized that they not only missed Obama’s administration but regretted their slander of the former president despite his more independent leaning views. They realized they made a mistake; they did not know how good they had it until it was gone.

With this in mind, in 2020, the party selected a candidate who had stances that were more “middle-of-the-road.” Politicians like Bernie Sanders and Elizabeth Warren were considered too divisive and the party chose the candidate that would not “rock the boat” as much as others: Joe Biden. Not only was Biden open about his more independent views but his previous role as vice president under Obama gave him even more leverage as the best lukewarm candidate.

While their strategy worked for the time, the cycle seems to be repeating itself now. Biden and his cabinet are being criticized for not fighting for the right issues and not fighting hard enough for the issues currently on the table. Like president like the vice president; Biden is being critiqued just like his Democratic predecessor.

If The Amazing Spider-Man 3 were to be created, it would just be critiqued by the same people who begged for it. Undoubtedly, the author of this article has a strong admiration for Andrew Garfield and his saga. However, the truth remains the same. While No Way Home was praised heavily, people still found things to complain about (mostly Maguire and Garfield’s careers). The audience will always call for something to come back, either for nostalgia or because they do not like the current state of affairs, and they will always find something to critique about the end product ultimately ending in another call for change.

The cycle continues on and it is pervasive in many issues. We as the people miss what we had in our past that we did not treasure at the time but then we spit on it when we get it back. The present will never be good enough for both audiences and voter’s outcry will be their outlet. If a fresh, new candidate like Alexandria Ocasio-Cortez joins the ballot and loses the race to another Trump, Democrats will plead for another Biden term. In the end, we as both media reviewers and political participants will never be satisfied.