JCU Women’s Basketball locks up No. 1 seed in the OAC Tournament on senior day 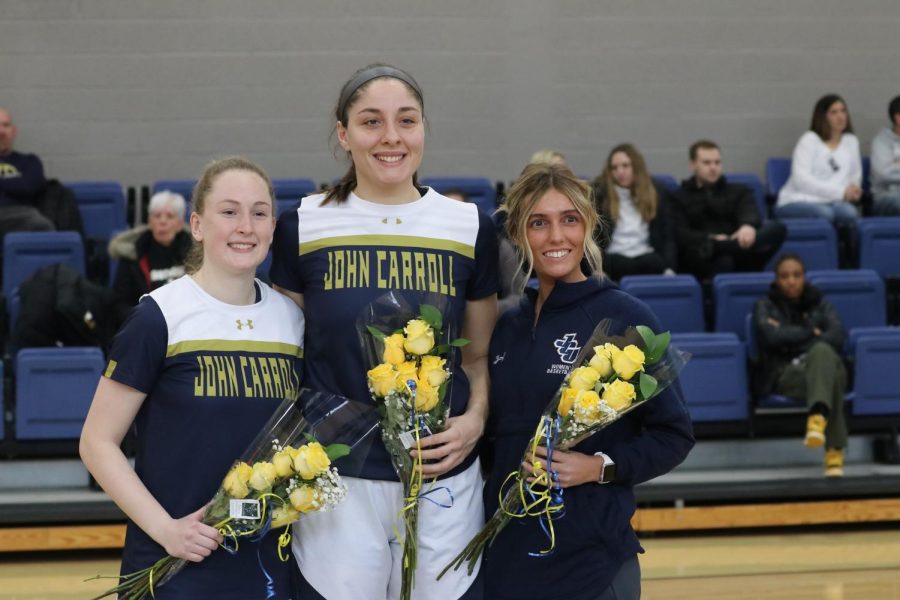 Sarah Balfour, Olivia Nagy and Hannah Bouchy on Saturday, Feb. 19 prior to their game against Wilmington College

The heightened energy across the Tony DeCarlo Varsity Center due to “Senior Day” festivities certainly paid off for the John Carroll University Women’s Basketball team during their home game on Saturday, Feb. 19, against Wilmington College. But, in reality, “Senior Day” or not, the Blue Streaks are just that talented.

A final score of 85-59 proved that a home-court advantage, along with an accomplished roster was the recipe for success. The victory was necessary for John Carroll, as a win secured them the No. 1 spot going into the Ohio Athletic Conference Tournament.

“The senior day festivities definitely heightened the energy for the game because we all wanted to win for them,” expressed Hallen Landies. “It was such a great way to honor them and everything they’ve done for our program over the years.”

After a single quarter of play, the Blue Streaks managed to score 31 points, while the Quakers put up a mere 13. Graduate student Nicole Heffington put 10 points on the board for some Blue and Gold momentum heading into the second quarter.

In the midst of a fast-paced second quarter, younger talent entered the game, showcasing the depth of the lady Blue Streaks squad. Landies came off the bench and sank a three-pointer, keeping victory far from the grasp of Wilmington.

Landies, a transfer from Ashland University, revealed her thoughts regarding the pristine upperclassmen talent.

“The seniors have really helped me develop as a player. As a transfer coming into a new program, the beginning of the year was an adjustment for me, but they were always there to help with whatever us underclassmen needed. They have all been such amazing leaders and I’ve learned so much from them this season”.

Balfour made her talents noticeable with her seemingly effortless drives to the rim, combined with her dynamic outside shots that left her opponent on her heels. Balfour finished the game with 15 points and three assists, showing that her successful career with John Carroll has culminated into something honorable.

At half time, the crowd was left astounded by the John Carroll lead, as their point total was 54. The relentless Quakers were lucky to have 28, in spite of a smothering Blue and Gold defense.

The second portion of play showcased the same, if not better, level of play from the Blue Streaks.

Heffington continued to dominate the floor and ended up finishing with 21 points, while her under-the-hoop partner, Nagy put up an impressive stat-line with 10 points, 24 rebounds and 10 blocks, earning her a triple-double.

Nagy’s triple-double and Heffington’s scoring tally are just a sliver of evidence as to why the Blue Streak squad is virtually unstoppable.

“I think the main reason for the team’s success is that we all play for each other,” said Landies.“Our team has such great chemistry on and off the court and that is such a game changer. Being a part of such a tightly knit team is a blessing.”

As the regular season’s schedule comes to an end, the Blue Streaks look forward to allotted practice time to fine-tune their abilities for the OAC tournament in the near future.

“Post season will be a great way to keep growing and improving as a team,” Landies mentioned.

On Tuesday night, John Carroll will take on Wilmington College in the second round of the OAC Tournament. The contest is scheduled for 7 p.m. at the Tony DeCarlo Varsity Center on John Carroll’s campus.