John Carroll Baseball gets back on track with two weekend victories 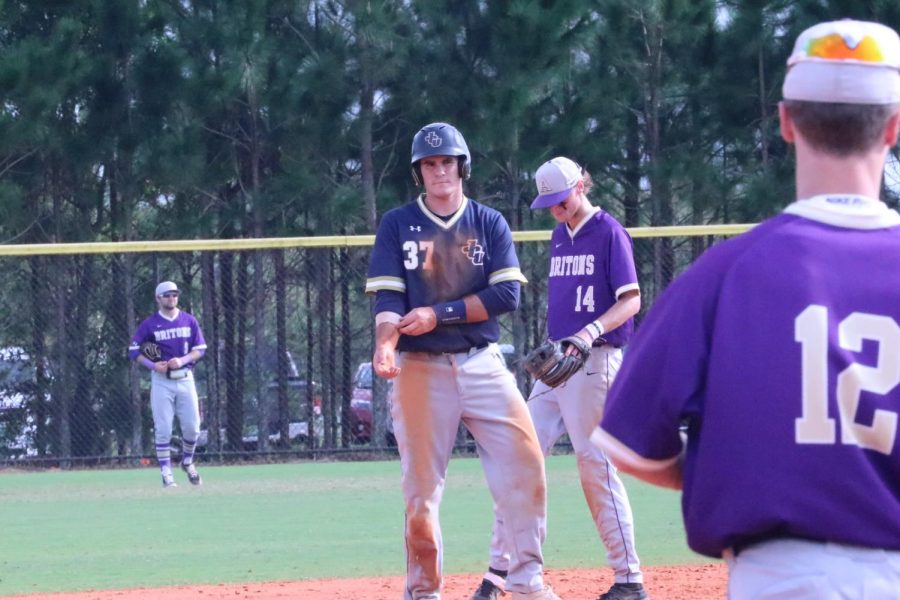 Landen Glaser competing in a game during spring break for the Blue Streaks.

Breaking a five game losing streak, the John Carroll University Baseball Team went 2-1 in a three-game matchup against the University of Mary Washington Golden Eagles on both Friday, March 18 and Saturday, March 19.

After traveling to Fredericksberg, Virginia, the Blue Streaks won the first two games before dropping the final game of the series.

Mitch Midea ‘22 started on the mound and held the Golden Eagles scoreless as he protected the 4-0 lead.

Slowing things down in the second inning, John Carroll added one more to the scoreboard as Joe Olsavsky ‘24 moved his way around the diamond.

Both teams stalled on the offensive end, until the bottom of the fourth when Mary Washington finally put one run on the scoreboard.

The Blue Streaks were unphased as they were able to bring both Glaser and Jared Orwell ‘23 home, going up 7-1 against the home team.

“Going into the games Friday, my focus was to continue to be a leader on the field as we looked to snap a losing streak. As a senior it would be easy to give up on the season or let frustration get in the way as we did not achieve immediate success,” said Glaser. “Being a catcher means all eyes are on you due to constant involvement in the game. I made it a priority to lead by example to remind the team that the train is not off the track, it just needs a little steam.”

It was in the bottom of the fifth that the Golden Eagles found their offensive stride, as they scored four runs and brought it to a two-run game.

The Blue and Gold held on throughout the last four innings, earning them the 7-6 victory.

“The key to this victory was getting a lead early and building on it as the game progressed,” said Midea. “We knew that Mary Washington wins games off the other team’s mistakes, resulting in massive innings that shift the balance of the game. Our job as a pitching staff and defense was to eliminate those big innings, which we did for the most part, which led to our success this weekend.”

Game Two of the series didn’t have the same immediate spark as the previous day’s game, but finished with the same result as before, as the Blue Streaks were able to capitalize once again against Mary Washington.

Matthew Springer ‘22 was the first to score for John Carroll in the top of the third inning.

This run would go unanswered until the bottom of the fifth when the Golden Eagles rounded the bases twice, taking the lead for the first time in two games.

The home team continued their offensive rampage, adding two more runs  to the scoreboard in the bottom of the sixth, until the Blue and Gold’s offense exploded.

John Carroll scored six runs in the top of the seventh as the squad retook the lead with a definitive 7-4 score.

Henry Haracz ‘22, Ryan Funderburg ‘25, Ben Surman ‘22, Olsavsky, Glaser and Luke Chlystek ‘24 all made their way around the diamond for the Blue Streaks’ offensive burst.

The Golden Eagles attempted to claw their way back into the game, but were only able to add two more runs to the scoreboard as John Carroll once again added a mark in the victory column.

Matthew Aukerman ‘23 started on the mound for the Blue and Gold, providing a consistent pitch count to stall the Mary Washington offense.

“We were able to win as a team. So many guys got their numbers called and stepped up in big moments,” said Aukerman. “I absolutely love seeing younger guys come through in clutch situations. That will get us more wins going forward.”

Carrying their scoring momentum from the previous game, John Carroll started with a 2-0 lead, with Olsavsky and Surman scoring in the top of the first inning.

The Golden Eagles were slow, but deliberate, with their scoring over the next few innings, until the bottom of the fourth when they rounded home plate three times, to take a 6-3 lead over the Blue and Gold.

The Blue Streaks countered back with a three-run inning at the top of the sixth, but with late scores in the bottom of the seventh, Mary Washington claimed the final game in this series with a 6-8 victory.

“For being on a five-game losing streak going into last weekend, we had a pretty good mindset and a lot of confidence going into this series,” said Orwell. “We know what we are capable of doing on the field and we just need to go out and prove it to ourselves. Once we clean up the little things in the game and become a bit more disciplined as a group, the sky’s the limit for this team.”

John Carroll will look to capitalize on the success from the weekend as they travel to New Concord, OH on Saturday, March 26 to take on Muskingum University in a double header series at 1 p.m. and 4 p.m., following one out of conference game on Tuesday, March 22 against Oberlin College.

“This weekend we saw a lot of progress in many areas,” said Midea. “If we are able to continue the momentum from last weekend and build upon it once conference play starts this weekend, it will be one of those moments we look back on and say: this is the day where we took that turn. That is the day that the identity of our team started to solidify.”