The United States must make a stand now, while it counts, and be what it claims to be: a defender of freedom and equality and human rights the world over. 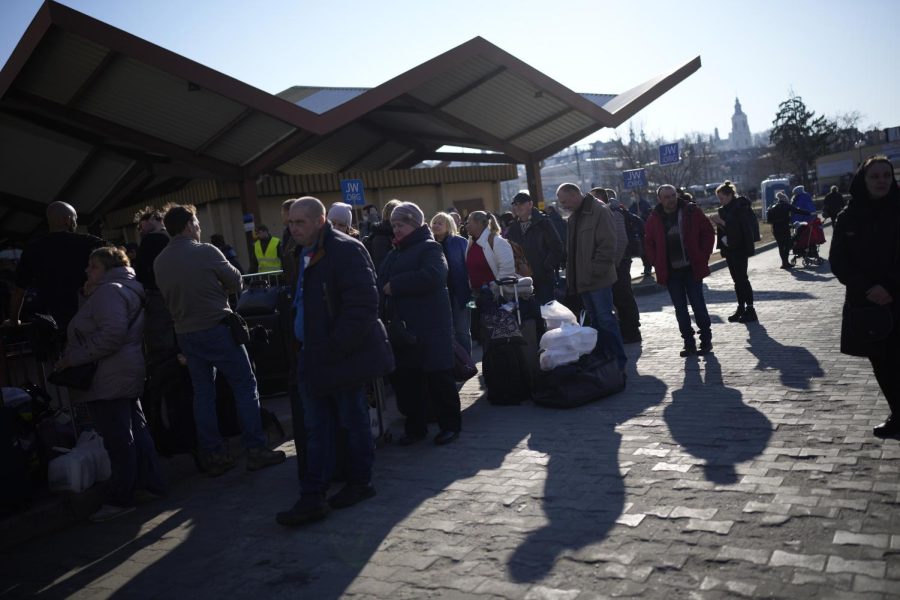 People wait in a line to board a train leaving for Lviv in Ukraine at the train station in Przemysl, Poland, Monday, March 14, 2022. While tens of thousands of people have fled Ukraine every day since Russia's invasion, a small but growing number are heading in the other direction. At first they were foreign volunteers, Ukrainian expatriate men heading to fight and people delivering aid. But increasingly, women are also heading back.

On Nov. 9 and 10 of 1938, the Kristallnacht (commonly translated as the “night of broken glass”) pogroms killed around 100 innocent Jewish Germans. The horrors of Kristallnacht made manifest the violence undergirding Nazi ideology. Examined in light of the systematic extermination of Jews which proceeded in the following years, this prelude to genocide is all the more chilling.

Just a few months after the November pogroms, 937 mostly-Jewish refugees fled Nazi persecution aboard the transatlantic ocean liner St. Louis bound for the new world. Upon arrival, only 28 were allowed to enter Cuba. The rest sailed north to America where they were again met with resistance. The ship’s captain circled around off the coast while he tried desperately to negotiate entry for his remaining passengers. He was unsuccessful.

About a month after departing, the St. Louis returned to Europe with all but 28 of its passengers. Jewish organizations in Europe were able to negotiate entry for the passengers to four Western European countries. Still, 254 of the passengers would later be murdered by the Nazis.

83 years later, as Russian President Vladimir Putin launches the first land war in Europe since, World War II analogies abound –– from posters of Putin with a Hitler mustache to accusations that Western appeasement will make of Ukraine a second Sudetenland. While Hitler comparisons make for useful anti-Putin propaganda and warnings of appeasement should certainly be considered by Western analysts, we must not miss the analogy already playing out right before our eyes: the human toll of war. Any war is certain to produce refugees and civilian casualties, but Mr. Putin’s war is in a league of its own.

As the Ukrainian resistance proves a nasty thorn in the side of Russia’s imperial ambitions, Putin has apparently chosen to lay waste to the country in an attempt to break the nation’s will to fight. Reports have already emerged of random bombing of civilian targets –– hospitals, theaters, schools, apartment buildings. After initially flailing, the Russian military has finally found its footing, and the results have been disastrous. In the port city of Mariupol, bodies have piled up in mass graves as the city struggles to count their dead.

Meanwhile, more than 3 million have fled the country and Russia’s war crimes. Most of the refugees have been absorbed by Eastern European countries. But as the violence shows no signs of slowing, the refugee situation is bound to become untenable.

The United States has pledged to accept only 125,000 refugees globally this year. That number was unacceptably low before the invasion of Ukraine, and with the millions now fleeing random bloodshed, it is now reprehensible. What’s worse, even though that is the official cap, the immigration system, gutted by President Trump, is struggling to process what applications it can. Right now, the United States is on track to accept only 16,000 refugees this year, which would be the second lowest number on record.

The Niskanen Center, a Washington D.C.-based think tank, has proposed a number of measures which could easily help increase the number of refugees allowed to enter the United States. Most of these measures involve bureaucratic maneuvers to expedite applications.

When the last major European land war broke out in the 1930s, the United States failed to do its part in accepting refugees. As the specter of World War II once again looms large on the continent, let us not forget the real human consequences of turning refugees away. As Putin lays siege to major Ukrainian cities, the United States must do all that it can to support the people of Ukraine and, in the process, the promise of global liberalism against the pathology that is authoritarianism.

The United States must make a stand now, while it counts, and be what it claims to be: a defender of freedom and equality and human rights the world over. Last time history came calling, we failed, sending 254 Jewish refugees to their deaths. History is again staring us in the face, we must not back down again. Hundreds of thousands of lives depend on it. Let us listen to the immortal words etched beneath the statue of liberty –– and, this time, let’s listen for real.

“Keep, ancient lands, your storied pomp!” cries she
With silent lips. “Give me your tired, your poor,
Your huddled masses yearning to breathe free,
The wretched refuse of your teeming shore.
Send these, the homeless, tempest-tost to me,
I lift my lamp beside the golden door!”