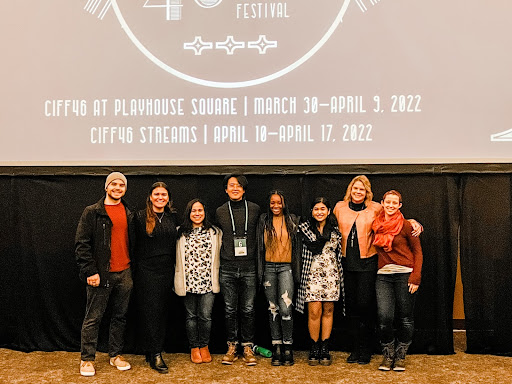 This past Friday, I attended the 46th annual Cleveland International Film Festival at Playhouse Square with the staff members of the Center for Student Diversity and Inclusion. CSDI was one of the sponsors for the showing of the documentary “Accepted,” directed by Dan Chen, which gives viewers a perspective of the high stakes for college admissions.

The film synopsis reads as following:

“In rural Louisiana, the TM Landry Prep School boasted a remarkable 100 percent college acceptance rate for its ambitious, underprivileged high school graduates. Adherence to the strict discipline and unconventional teaching program created by its charismatic founder Mike Landry all but guaranteed admission into the country’s most elite colleges, but did the means justify the ends?

“This documentary follows four students poised to excel before the exposé threatens to derail their futures. The film provides well-rounded portraits of the students’ home lives, their confusion and anxieties, while also seeking to understand Landry’s rationale, and examines the double standards between the haves and the have nots in the quest for the elusive college acceptance letter.”

During the filming of the documentary, The New York Times published an article that revealed the “cut corners and doctored college applications.” After that revelation, Chen resumed filming, now from an alternative perspective than before the scandal. During the Q & A session after the film, Chen emphasized his intentions and the importance of the documentary remaining to be in a student’s point of view.

“When I was thinking about how we would film this movie, I wanted it to feel as if one of the classmates were filming it, really wanting to be from their point of view,” said Chen.

Chen continued, “especially as you see the story unfold, you see Mike [Landry] tell their story and then you see the media give their take on what the school means or what education means. At the end of that I wanted to bring it back to the students who are living through it, this is their lives that are affected. So, to give them the voice.”

I am a student of color myself and while I did not apply to any Ivy League institutions, I have felt the pressure of feeling as if I had to be twice as good as other students.

CSDI Director, Selen Zarrelli, shared her perspective of how the barriers already affecting marginalized communities became enhanced by the actions of Mike Landry.

“There’s barriers already built into marginalized communities preventing them from getting accepted into some colleges,” Zarrelli stated. “Then, at TM Landry, they were trying to close those gaps; they were not following the right procedures and building more barriers for the students.”

Essentially, it brought me and other viewers to reflect on whether Mike Landry did more harm than good for his students.

CSDI Program Coordinator Daniella Flores expressed her unique perspective of being a student and currently being in a profession in which she helps students from marginalized communities to excel. While she sees no excuse for Mike Landry’s actions, Flores did acknowledge the great lengths the man was willing to go through to get those students of color into predominantly white higher institutions.

“I saw both perspectives, and both discrepancies in the system,” Flores said. “This just shows you how much the educational system needs to be reformed and changed. It also shows how people suffer from it; the students can suffer, the teachers can suffer and the people who come from these communities suffer from it.”

All of this brings me to question: how can the educational system be reformed to be more equitable and accessible for everyone? The film started to address this component of the issue near the end of the film.

I found that there was definitely a missing component to the film and Zarelli and Flores agreed.

“I would have loved to see more about how systematic oppression and systematic racism is built into the system,” Zarrelli elaborated. “Also, I wish there was some kind of a narrative that connected both college admission scandals and the students. I think that was the gap that was missing in the movie.”

Flores found that there was a lack of emphasis on why these scandals are happening to begin with.

“Why are people a part of it?” Flores questioned. “Why are they doing that? Because the meaning is so much deeper than what it’s showing? It’s like the tip of the iceberg and then underneath all that ice is the unconscious biases, or the systematic oppression, systematic racism, and you just see the tip, which is the school.”

For anyone who is still interested in attending the Cleveland International Film Fest, the final date of film showings will be April 9. Films will also be available to stream from April 10 to April 17. For more information, visit the CIFF 46 website.