“I’m just me and that is good enough. I realized that the people I love and care about won’t be around forever and neither am I.” 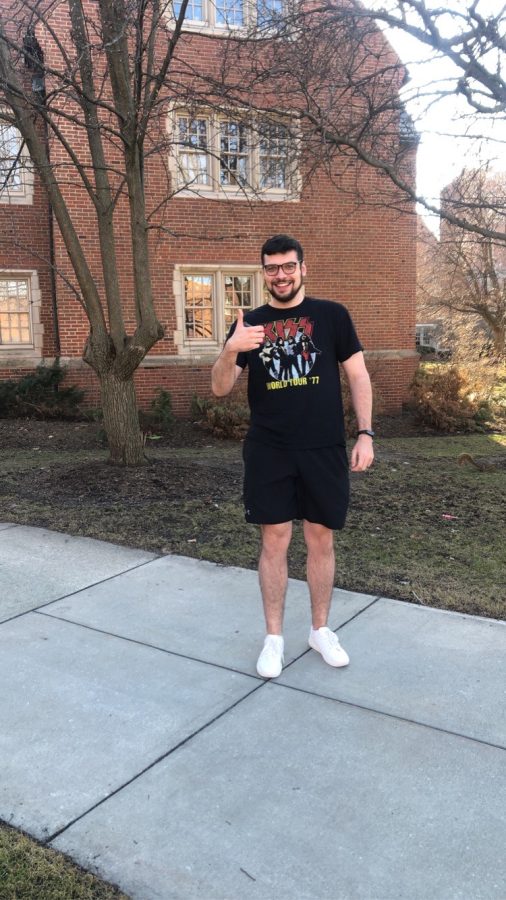 Adam Brennan '23 does all he can to put the most amount of effort into his daily activities.

Many college students find themselves juggling their classes, extracurriculars and career opportunities all at once during their higher education journey. For many, it can be a complex situation filled with frustrating circumstances. This can be especially stressful for juniors and seniors who are deciding the next steps in their life.

Adam Brennan ‘23 currently has two internships, works as a resident assistant and is a full-time student on campus. The computer science major has established a jam-packed schedule in hopes of reaching new heights in the world of tech.

Brennan told The Carroll News that he always thought of himself as an innovative person even as a child, further drawing him to the world of programming. Born and raised in Aurora, Ohio, Brennan took naturally to classes like Advanced Placement computer science at his local high school saying that he can “learn anything” from the internet. This also propelled his love for gaming, especially Minecraft, where he could further utilize his talents for creation.

“I love to build things,” Brennan stated. “I think that I am motivated, disciplined and creative. From a young age, I always enjoyed looking for what I can build and not what all was out there. I always enjoyed Lincoln Logs and LEGOs because I could make what I wanted. I like to architect my own solutions to problems.”

Brennan says that he chose John Carroll because it “made the most sense.” Although he commuted his first year from his home, he now serves as an RA in Millor Hall. When asked why he decided to be a resident assistant, he stated that he was “inspired by other leaders on campus and wanted to fill those shoes.”

This inspiration carried over to Brennan’s extracurricular aspirations his first semester staying on campus. In Fall of 2021, Brennan was a peer learning facilitator at the library, a computer science teaching assistant and a software development intern with Union Home Mortgage all while taking 15 credits.

“AB [Adam] goes above and beyond in everything he attempts,” Leanna Nasrallah ‘23, an RA in MIllor Hall, stated. “He is one of the most impressive people I have ever met.”

“At UHM, I wrote applications that satisfied business needs,” Brennan said. “Now, I am a software engineer intern at Cleveland Clinic and a software developer intern at UHM. I am taking more of a technical leadership role this summer for the intern team.”

“Adam Brennan is an outstanding student leader who represents the very best of JCU,” Sam Ellis, the area coordinator for Murphy and Bernet halls, told The Carroll News. “He is an incredible RA and his significant contribution to the campus community is evident through the respect he has earned from his peers and those who have the privilege of working with him. The energy and enthusiasm Adam brings to JCU is something to be truly valued and his impact is clearly recognized by those around him.”

When asked why he keeps a busy schedule, Brennan says he did it because he was “bored.”

“My normal day looks like waking up at 6:30 a.m. or seven a.m. on Mondays, Wednesdays and Fridays,” Brennan stated. “I work at the clinic for four hours and then from noon to five p.m. I work at UHM. After that, I do homework. I have my classes on Tuesdays and Thursdays but still work at Union Home Mortgage for two and a half hours.”

Brennan keeps his busy life in check by taking time for what he deems important. This includes being social with his friends or his girlfriend or catering to his floor environment in Millor Hall.

“Adam is that guy who makes it a priority for the people in his life to know how much he cares about them,” Katie Sutton ‘23, Brennan’s girlfriend, told The Carroll News. “Adam constantly tells me how grateful he is for this friend or ‘what a neat person’ someone else is. He’s got that ‘dad energy’ that makes him so considerate.”

“I have a hierarchy with which I decide what things should be done,” Brennan continued. “I’m not sure what that hierarchy looks like, but it’s in my head somewhere. I want people to remember me not by what I have done but what impact I have made on them; not what kind of student I am or what I have accomplished but how I treated them. At the end of the day, you have to live and die for the team.”

“Adam is a fantastic example of a student leader on campus,” Rebecca Kates, the area coordinator for Millor Hall, stated. “He is enthusiastic, kind, and always willing to help out our team.”

When it comes to his future, Brennan says that he “codes now and does not plan to stop;” he wants to work for a company where he can leave a positive impact on the world and “makes the lives of others better.”

“Every day I want to be the best version of myself that I possibly can be,” Brennan ended. “I’m just me and that is good enough. I realized that the people I love and care about won’t be around forever and neither am I.”