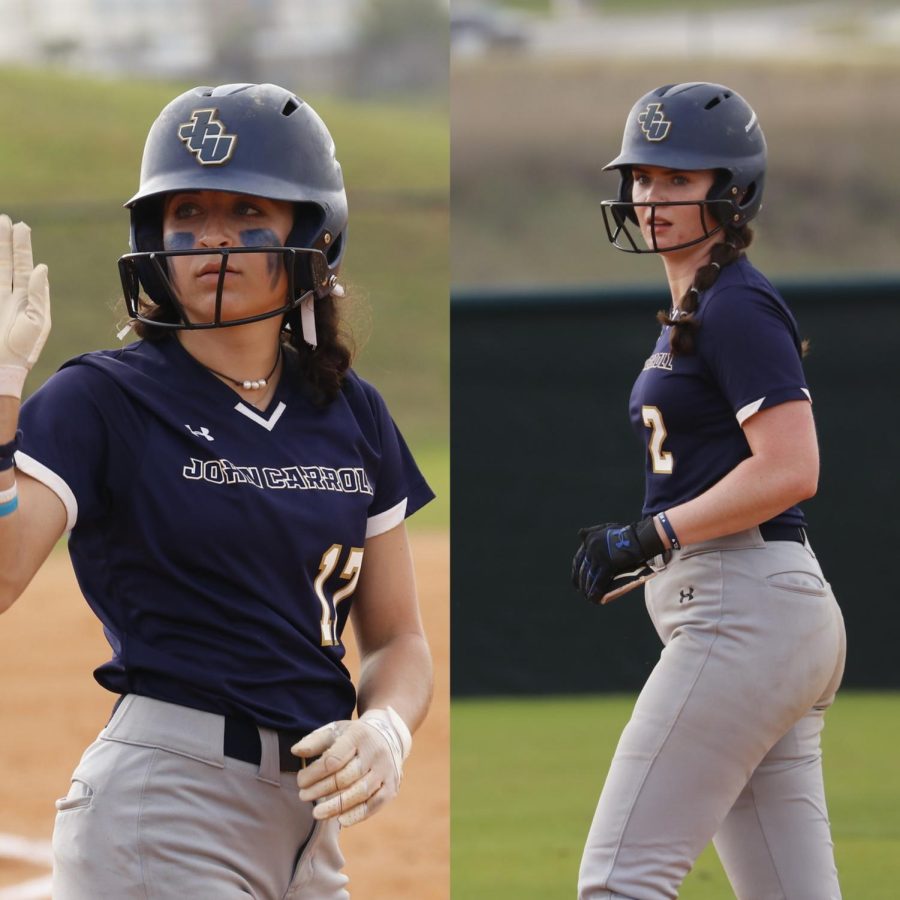 Crista Nativio and Gracie Bressoud are a powerful force for the John Carroll Softball Team. This year, the Blue Streaks are off to their best start since 2015.

They’re hilarious. They’re personable. They can freestyle rap songs better than anyone in the Ohio Athletic Conference. And they are pretty good at softball as well.

Amazingly, both Crista Nativio ’22 and Gracie Bressoud ’23 didn’t know if they would play softball past high school.

Perhaps they had a change of heart when they both met each other at softball camp at John Carroll University in 2018 when Nativio was a senior and Bressoud was a junior in high school.

At the camp, since they both play in the outfield, they were put in the same practice groups, where they quickly became attached to one another.

“We were being taught crow hops, and I vividly remember Crista being super high-energy and fun,” Bressoud said.

Nativio added, “Gracie and I connected because we had the same mindset, we got angry and annoyed over the same things [at camp].”

Prior to camp, both players were still debating if softball was the way to go.

Nativio was a star tennis player at Neshannock High School, where among other awards, she was named the 2018 female athlete of the year. Given her success on the court, she received multiple offers to play tennis.

As for Bressoud, she initially was not interested in continuing her softball career.

“I didn’t really want to play softball in college, because I wanted to have a normal college experience,” said Bressoud.

Being a year older, Nativio was the first to choose John Carroll, given her love for the campus and its small size.

Since tennis and softball are both spring sports, she had to choose one over the other, and eventually, Nativio decided to choose softball and join the Blue Streak team.

In her freshman year, she made an immediate impact, starting in 34 games and totaling 13 runs, 25 hits and 12 RBIs.

A year later, when it was Bressoud’s turn to choose a college, her low ERA and her blazing speed caught the eyes of recruits from more than two dozen schools, which convinced her that she should consider playing softball at the higher level.

While Bressoud claims it was the “city feel here at John Carroll” that she loved, you can’t help but believe it was the friendship she began with Nativio at that softball camp that ultimately won at the end of the day.

When Bressoud joined Nativio at John Carroll, they did not miss a beat during their time apart as they quickly became close friends.

Given that they are both lefty slappers and outfielders, they were often each other’s hitting and throwing partners.

While COVID-19 dismantled the 2020 season, Nativio and Bressoud’s partnership paid huge dividends on the field in 2021.

Nativio led the team with a .407 batting average which ranked fifth in the OAC and ended the year on an 11-game hitting streak.

Meanwhile, Bressoud topped the team with 17 stolen bases which ranked fourth in the OAC. She did not commit an error the entire season, as she was just one of two John Carroll starters to accomplish the feat.

As for the current 2022 season, with Nativio being a senior and Bressoud being a junior, their veteran leadership has taken the team to a 9-7-1 start, the best start to a season since 2015.

“We lead by example. It goes a lot with the attitude on the team. Our attitude is to keep our heads up,” said Nativio.

“Both of us do that very well,” added Bressoud.“Even if we are doing bad, you won’t see that with our emotions.”

Their leadership mid-game is unmatched, whether they are on the field or in the dugout.

Nativio, being the vocal leader of the team, leads the team in chants mid-game.

“Crista is the loudest one. You cannot get her to shut up,” said Bressoud.

Yet, Nativio owns it and is proud of her deafening vocal cords.

“I do take pride in being the loudest,” she said.

Despite their unbreakable bond on the field, their friendship goes beyond what they put out on the field.

“Crista is always coming over. We think very similarly outside of softball as well,” said Bressoud. “Whenever anything happens, I know I can text Christa because I know she will have the same thoughts.”

“That’s exactly what it is, I know that when I tell Gracie something, it will be between me and Gracie and I know we will both have the same opinions and mindset,” says Nativio.

Unfortunately for the junior, Nativio will be graduating in May, so Bressoud must continue her leadership on the softball team without her best friend.

Nativio will graduate with a teaching degree, where she plans on teaching and coaching at the high school level.

John Carroll Softball won’t soon forget the legacy these two friends have left on and off the field. While their time together at John Carroll is coming to an end, their unbreakable bond will remain the same.