JCU Baseball comes out victorious in return to Progressive Field 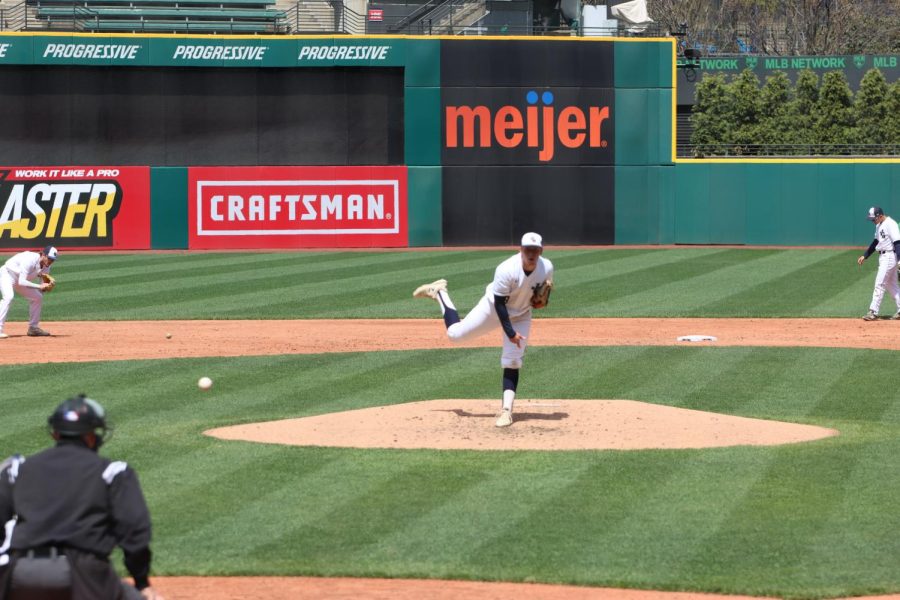 The Blue Streaks defeated Hiram college in a sweeping victory of 4-0 on the same diamond that the Cleveland Guardians defend during their home games, Progressive field. The chance to play on a Major League Baseball field proved to be a key motivator for John Carroll representing the nostalgia and decades of dedication to America’s favorite game.

The Blue and Gold returned to this stadium for the first time since May 3, 2017 when they defeated Case Western Reserve University in a 10-5 decision.

“It was so special to have the opportunity to use the same locker room, same dugout and same field as some of the best players in baseball,” reflected Tyler Gast ‘24.“Being in the same locker room the Cubs once celebrated a World Series in, even though it was after the defeat of the Cleveland Guardians, was amazing to think about.”

Joe Smith ‘22 was steady on the mound for the first handful of innings, leaving the Terriers with just two hits to fuel their offense.

A swift pitching change gave graduate student, Andrew Steele, a chance to throw off Hiram’s chances of a hit. To the pitcher’s credit, the opposition couldn’t find enough hits to bring in some needed runs, leaving the game fairly stagnant.

With an early 1-0 lead, courtesy of Ben Surman ‘22, offensive pushes on either side of the dugout were minimal. But steady hitting from Justin Hanley ‘22 and Henry Haracz ‘22, along with overall consistency from standout Joe Olsavky ‘24, gave the Streaks a competitive advantage for the later portion of play.

“Haracz was one of the strongest team leaders throughout the year. His guidance, hard work, and positive enthusiasm helped create a great team atmosphere,” said Gast.

With an intrinsic motivation to emerge victorious, John Carroll was able to record some pivotal hits at bat; Olsavasky is credited with a necessary single that sent Haracz, and eventually himself, over home plate.

The final tally of runs for the Blue and Gold was four while Hiram’s total remained at zero.

Following the previous 7-6 victory against the same squad of Terrier’s, the second consecutive win showcased a determined and gritty John Carroll squad.

Following the impressive victory, the Streaks fell to a talented Otterbein University team on Saturday, April 30.

Just a day later, weather cancellations postponed the Senior Night celebrations for the Blue and Gold, but a handful of Ohio Athletic Conference matchups still remain on the John Carroll Baseball schedule.

With the season winding down, the Blue Streaks are prepared to finish the season strong, but they also have their eyes on the potential of next year’s squad too.

“While we are graduating a lot of key players, their leadership will be passed down to a group of underclassmen that are ready to win,” commented Gast “There is a lot of talent returning to the program next year and we will continue to play to the same standard and goals we have set this year.”

Their next contest will be on Thursday, May 5 at 4 p.m. at Schweickert Field against Case Western Reserve University for their first home game of the season.