The Carroll News • May 27, 2022 • https://carrollnews.org/202323/world/thoughts-and-prayers-arent-enough-to-stop-another-travesty/

“Thoughts and prayers” aren’t enough to stop another travesty 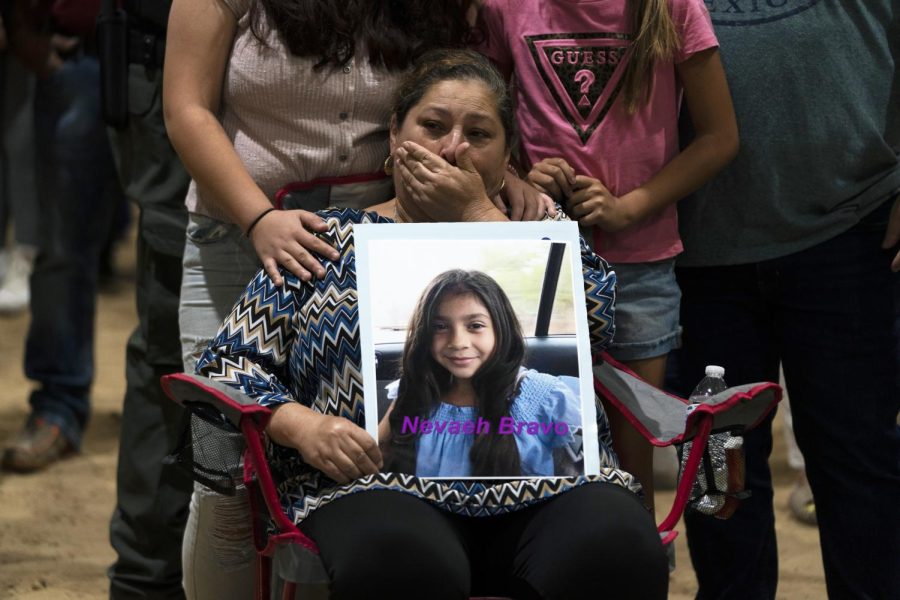 Esmeralda Bravo, 63, sheds tears while holding a photo of her granddaughter, Nevaeh, one of the Robb Elementary School shooting victims, during a prayer vigil in Uvalde, Texas, Wednesday, May 25, 2022.

Today, while I was working at my internship inside my claustrophobic cubicle, I was forced to ask myself a difficult question: how much weight does the word “another” carry?

At around 4 p.m., while I was busy creating elaborate PowerPoints and fiddling with my Rubix cube, I received a notification on my watch saying that 14 children and one teacher died at the hands of another mass shooter.

I didn’t register how devastating the headline was until I contemplated its gravity; these people were killed in another act of gun violence.

That word, while so minute, made me realize that I was not phased by the story I saw. I understood it as just another Pulse Nightclub, another Sandy Hook, another Columbine; it was just another tragedy that I was used to seeing. Even while looking into the incident later, when I Googled “Texas school shooting”, dozens of other occurrences filtered through the search engine, demonstrating just how common these acts are.

I, like many in America, did not guffaw at the news or shed a tear. I was in elementary school when Sandy Hook was attacked. My class had their eyes glued to the television set as our local PBS station changed to news coverage from Newtown, Connecticut. There was an in-memoriam text box set for the victims in the bottom corner of the screen; I watched, almost like clockwork, as another name of a dead child would be added every other minute.

Instead, in my cozy and safe office, I shook my head and simply said, “There was another gun attack,” to my coworkers. They too winced and shared condolences but they, like myself, were nowhere near shocked. Instead, they nodded and accepted the bloodshed as another day in the life of a United States citizen.

We anticipate mass shootings and gun violence at this point in our lives. We are taught in kindergarten how to throw books at and how to hide in cabinets from crazed men with fully automatic weapons. We are shown documentaries and dramatizations that tell us to be careful who we bully because they could have access to a shotgun. Children are told that they, any one of them, can be another victim of a mass shooter.

Throughout the night, I continued to refresh the webpage giving live updates on the situation. Another child died in the hospital. Another teacher was confirmed dead shortly after. Another life was gone.

As I reminisced on these thoughts, I could not help but ask myself how our nation got to this point. Politicians constantly give out thoughts and prayers as if they have the effects of a bulletproof vest. They say how saddened and shocked they are by yet another string of names but forget the souls they are attached to when they remember midterm elections.

Now, the blood of 21 people is on the hands of not only the legislators on Capitol Hill but also every person in the nation. We elected these representatives and senators who refused to pass a bill that would impose background checks for gun ownership or more restrictions on weapon modification. Instead, we let them bicker about state’s rights while the rights to life, liberty and the pursuit of happiness of almost two dozen people disappear.

It is easy to be like me and how I was reading the headline. It is easy to shrug at the shooting and say that it is just another day in America and there is no way to change it. To be fair, it is even easier to say that I had no part in the tragedy at all. Yet, we as American citizens, are at fault for what happened.

We refused to vote for the right legislators who put the lives of others before silly election games. We chose politicians who flagrantly brag about waving rifles and “taking down liberal ideologies” while they shoot a hole through a cardboard cut out of Kamala Harris or Joe Biden in a campaign commercial. Those 21 lives are not just dead because of our elected officials who refused to act, they are dead because we, as a people, did not put those in office who would advocate for the rights of those lost and yet to be lost to gun violence. We let another horrible shooting happen and choose to accept it as the modern-day United States without hesitation.

It is not enough to issue another rite of thoughts and prayers to victims and their families. It is not enough to sit back and accept another death as a part of the American dream. We are responsible for the change we want to see but we let it fall through the cracks of a political machine and party antics.

Admittingly, it may be impossible to phase the word “another” out of our vernacular regarding discussions about gun violence. The country is far past the point where a shooting is not all too uncommon, whether it be at a grocery store or even an elementary school. Yet, I am under the impression that we can take it upon ourselves to seek the day when we realize the vastness of such a heavy word. The first step toward this is by questioning who led us to the point where “another” became acceptable in the first place.