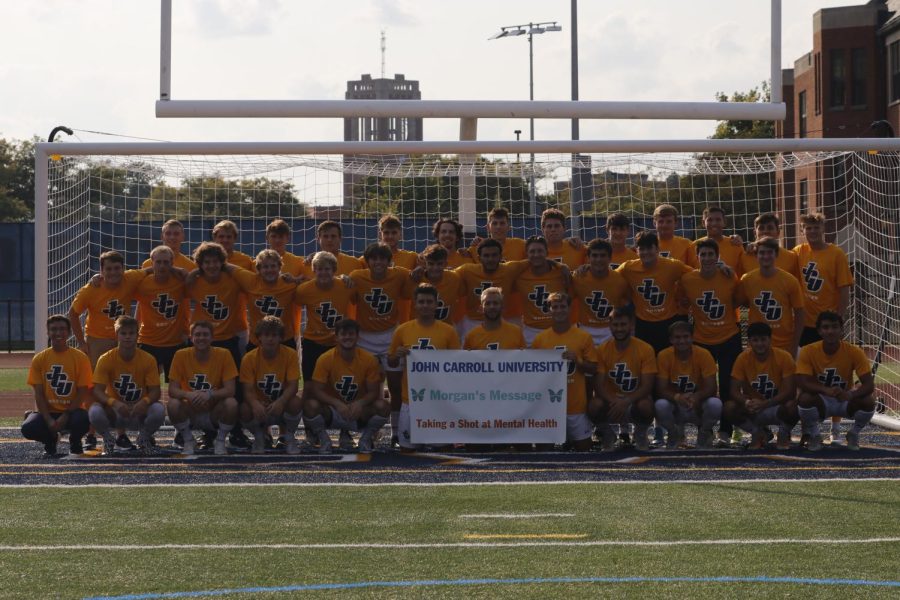 The JCU Men's Soccer Team during their game on Saturday, supporting Morgan's Message.

If there is one characteristic of athletics that reigns supreme, it’s the fact that a loss can ignite the innermost flames of determination for the future. For the John Carroll University Men’s Soccer Team, the glimmering flame over the past few weeks has dramatically increased.

On Saturday, Sept 17, the combustion culminated in a much needed victory. Engulfed in an undeniable spirit of conviction was a fundamental love for the game of soccer, a devotion that resulted in a 2-0 win over Ohio Wesleyan University.

For the Blue Streaks, the win put the John Carroll overall record at 3-2-1. In spite of Ohio Athletic Conference play in the coming weeks, the first series of matches proved to be a test of preparedness for an aggressive season ahead.

“We have a tough non-conference schedule so it’s really going to prepare us going into our conference play…with the strides we are making as a team, we are really confident moving forward,” Foht added.

Foht, who spoke highly of the benefits of a difficult collection of non-conference games, happens to be the player credited with both goals that transcended the Blue and Gold to triumph during their matchup against the Battling Bishops.

The game started off at an extremely fast pace. Both squads were equipped with personnel to gain offensive momentum, with complimentary defensive skills that clogged passing lanes for offensive surges.

In essence, the first half of play indicated two teams with similar skill levels. This came as no surprise, knowing that both John Carroll and Ohio Wesleyan were ranked in the top 25 of the United Soccer Coaches NCAA III Preseason Poll.

But, on Saturday, the statistics no longer mattered. The only entity that was of any significance, for John Carroll, was the heart.

“Our strategy in yesterday’s game was to take what they were giving us and take advantage of the opportunities that were there,” reflected Foht.

Foht was able to capitalize on said opportunities, as he placed a shot in the lower left corner of the goal to put John Carroll up 1-0 before half. But, Foht showed no signs of letting up because moments later, he located the ball with his head, off a pristine corner kick from Kyle Boehem ‘24.

Within a two minute span, the Blue Streaks were up 2-0, with the halftime whistle sounding shortly after Foht’s successes.

As the later 45 minutes of play progressed, the Battling Bishops continued to put forth a valiant effort. But, as the final seconds ticked off the clock, it was John Carroll that came out on top.

“This win has provided a huge boost going into the rest of our non-conference play,” mentioned Foht. “It has given us the confidence we need to get results moving forward,” continued Foht.

However, on Saturday, the victory was much larger than the game itself.

The win was pivotal for motivation moving forward, but it also was a representational tribute to a student organization known as Morgan’s Message. John Carroll men’s soccer chose to dedicate the game, and the astounding victory, to JCU’s chapter of Morgan’s Message, a national organization created to bring awareness toward student athletes and their mental health.

For the Blue and Gold, the game was a testament to the fight to end the stigma around conversations regarding mental health.

For John Carroll and other universities alike, it’s time to magnify the stories of struggle and adversity because student athletes need to know that they are not alone. As a community, we must have these discussions in hopes of a brighter future with mental-health transparency within collegiate athletics.

Together, our unity and willingness to gain perspective will tear us in the right direction.

The Blue Streaks will head to Denison University in Granville, OH on Wednesday, Sept. 21 for a matchup against the Big Red at 7:30 p.m.