COLUMN: State of California makes a *necessary* leap at NCAA to pay their athletes 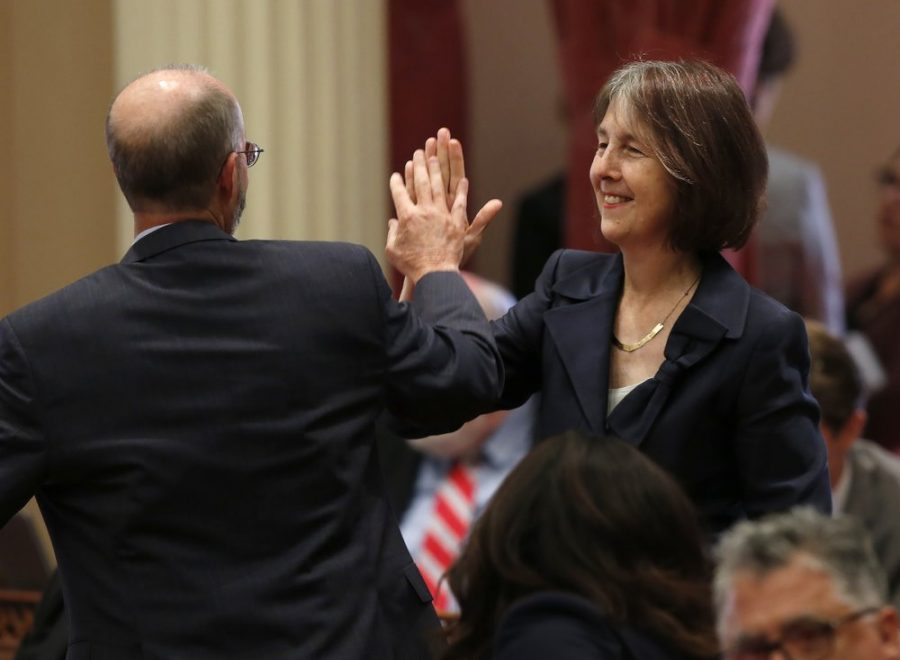 Sen. Nancy Skinner, D-Berkeley, and Sen. Steven Glazer, D-Orinda slap palms in celebration after her measure to let athletes at California colleges hire agents and sign endorsement deals was approved by the Senate in Sacramento, Calif., Wednesday, Sept. 11, 2019. The bill now goes to Gov. Gavin Newsom, who has not said whether he will sign it. (AP Photo/Rich Pedroncelli)

Put yourself in this position: you work for more than 40 hours a week, your business is making $1.06 billion off your image and reputation, and you do not see one penny of that money. That is the position of a Division I college athlete today.

Lawmakers from the state of California drafted a bill that “would allow athletes at California schools to hire agents and be paid for the use of their name, image or likeness. It would stop universities and the NCAA from banning athletes that take the money,” according to an Associated Press article from Sept. 11.

The AP also reports that the bill has reached the desk of Gov. Gavin Newsome, who will now decide if his signature will put it into effect.

The Golden State has at least put in motion a bill that would let its amateur athletes profit off themselves, attempting to slow the NCAA’s role in profiting from its players.

Division I college athletes have no less than 32 hours of commitment a week, according to a 2015 lawsuit by two former University of North Carolina athletes, as reported by The New York Times. For sports like football and baseball, Division I athletes are spending upwards of 43 hours weekly practicing, training and playing, in-season.

During the fiscal year of 2017-2018, the University of North Carolina garnered over $104 million in revenue from their athletics programs, according to an yearly revenue report — 247 sports highlighted the findings.T he amount that athletes received from that: zero.

Sure, Division I college athletes are often granted scholarships that pay tuition in full, but that does not even come close to repaying the earnings schools are making off their players.

So, I applaud California for creating a much-needed statute and taking this issue somewhere the NCAA will not.

If Newsome signs the bill, it could get ugly — but it is needed. It’s not just about refusing to pay athletes because of their amateur status, it’s about not allowing them to make money off their own image and likeness. Absurd.

It’s time for a change.