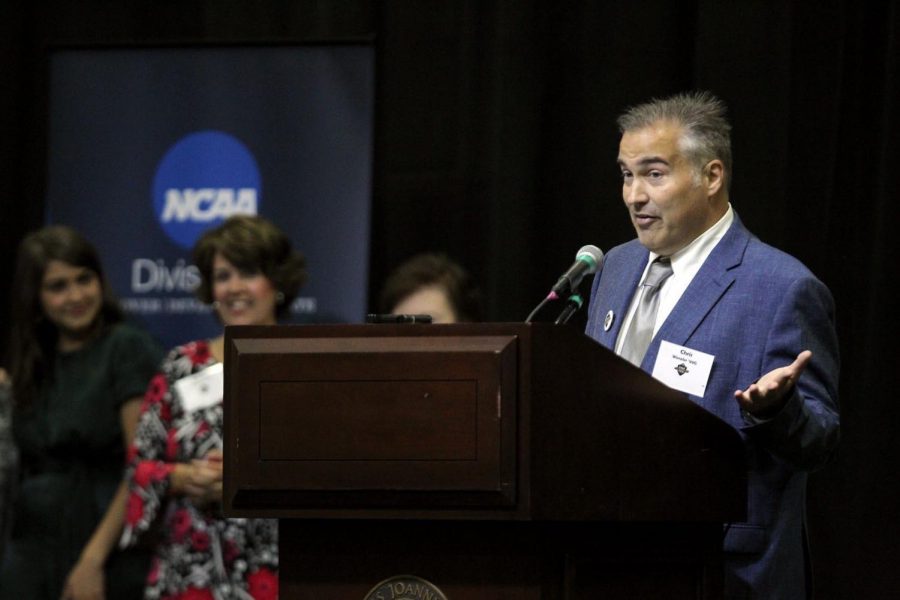 Imagine having multiple people trying to induct you into the highest honor of John Carroll University athletics, and declining multiple times. That is exactly what sports information director Chris Wenzler did every single time his name came up in Hall of Fame conversations.

“It was mostly people wanted to nominate me and I pretty much shot it down from the start,” said Wenzler on declining every Hall of Fame nomination. “I felt like it was a better award when I was retired. I felt like I would rather have something when I am done.”

The committee did it the only way they could, by going behind his back and surprising him. A long overdue recognition for Wenzler.

“Seeing my family assembled and then seeing Mike Scanlan come up on the stage, I started to realize something was up,” Wenzler told The Carroll News when describing the moment. “I was very touched, I didn’t expect it. It still has not sunk in.”

Wenzler is a graduate of the Class of 1990, and has held the position of Sports Information Director for the last 30 years. He is a staple of the JCU community and a recognizable face on campus.

His impact is evident by the outpouring of support that Wenzler received on social media.

From former NFL linebacker London Fletcher to rival schools and so many alumni and current employees and students at JCU, the congratulations he received for being inducted were astronomical.

“I still find it incredible,” said Wenzler. “ I just don’t look at life in that way as expectation. So it floors me and almost overwhelmed me to get that kind of response. I go about what I do every day because I like what I do and I like to bring joy to the world around me. To have it come back to me like it has is just humbling.”

Although it is an honor he will never admit he wanted, he is still grateful to be a member of this year’s class.

“It was a nice moment,” he said. “The fact that I went in with the 1989 football team… I have a lot of friends on that team. I am joining a club that has a lot of athletes in it that I respect. It was nice.”