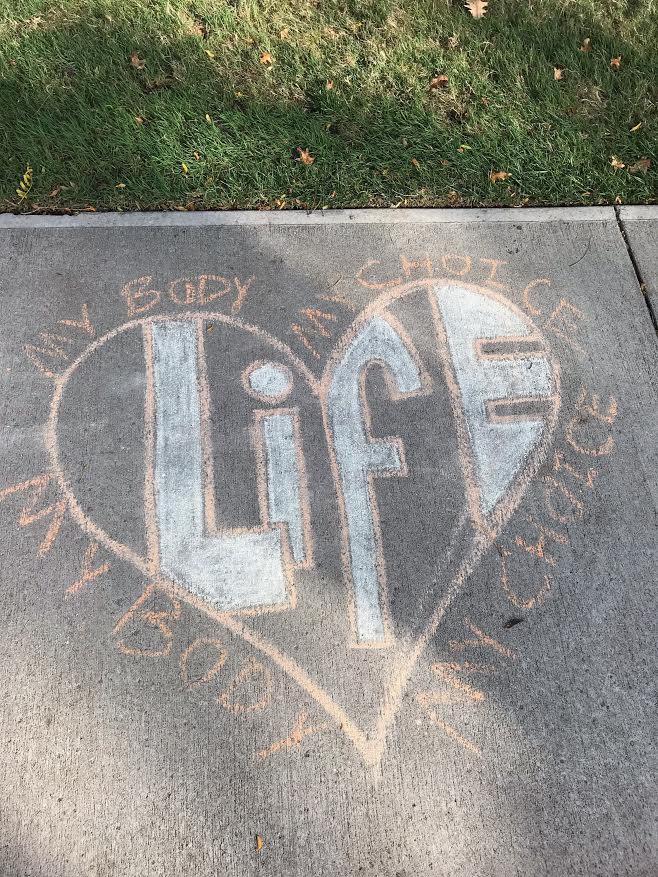 Above is a heart drawing that had been defaced with “my body, my choice.” (Photo courtesy Sophia Maltese)

“We are not afraid of discussion on these topics, but the way in which it was done we just thought was disrespectful,” said Jacob Fritsch, president of Respect For Life.

Respect For Life is a student organization on campus whose mission it is to inform and advocate for the protection of life from the moment of conception to natural death. On Oct. 10, the group wrote statistics, quotes and drawings relating to the number of abortions that occur daily in America, along with other pro-life messages, in chalk on the sidewalks in front of Dolan and Pacelli Halls.

“We chalked a message that said  ‘Abortion stops 2,362 heartbeats per day in the U.S.’ and that was from the Guttmacher Institute. We looked it up so that we would be correct in our facts,” Fritsch said. “Also, we drew one heart for every 10 children that are aborted on a daily basis. The main message was to get the scope of [how many abortions occur every day], and that is just in the U.S.”

Fritsch said there were chalk drawings of hearts with the word “life” written in them as well as the Dr. Seuss quote, “A person’s a person, no matter how small,” on the sidewalks.

The group began their work at 8 a.m., and by the end of the night on the same day, the messages had been defaced. “I had a friend who let me know that this had happened. I did not find out until 11:30 that night,” Fritsch said.

Fritsch said many of the chalk messages had the words “my body, my choice” written over or directly around the original chalk message. He also said that the some of the hearts with the word life in them had “life” crossed out and replaced with “choice.”

“I know that our chalking caused some controversy, but that is bound to happen when talking about a controversial topic,” said Antonia Piazza, the financial advisor for Respect For Life. “We tried taking a respectful approach that was mindful of our audience while still advocating for the unborn, who don’t have a voice. As long as abortion is legal, we will exercise our right to free speech and stand up for the babies who are unable to fight for their own lives.”

The group went through the Office of Student Engagement in order to get permission to chalk the sidewalks, and Fritsch said he was frustrated that the group’s work was defaced. After alerting OSE of the vandalism, both the original chalk messages and the pro-choice messages were sprayed off the sidewalks.

“My sentiment, and some of the other people who were involved, were mainly disappointed. We went through the process to do this officially. We put together what we thought was a good event to raise awareness and generate some interest on campus,” Fritsch said. “The fact that someone would come and put their own voice over top of our own is what bothered us.”

The individual or group of individuals who defaced the Respect For Life’s chalk messages remain unknown. “To my knowledge, there is no specific pro-choice group on campus,” Fritsch said. “I can’t say exactly who it was.”