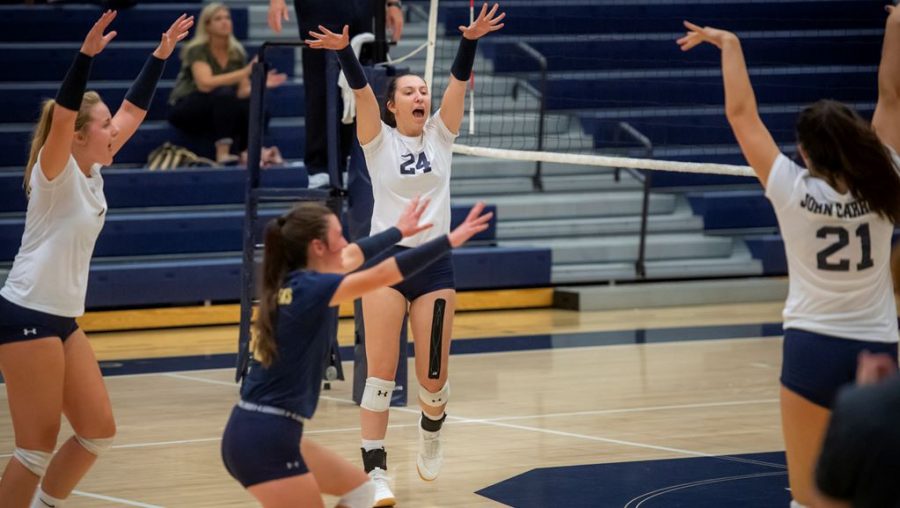 The JCU women’s volleyball team celebrates after scoring a point in a game on the road during the 2019 season.

The season for the eight-seeded John Carroll volleyball team came to an end on Tuesday, Nov. 5.

After closing out the regular season with two consecutive OAC victories, the Blue Streaks’ season ended after suffering a loss (12-25, 23-25,13-25) against the top-seeded Ohio Northern Polar Bears in the Ohio Athletic Conference tournament quarterfinals.

The Blue and Gold came into this match as underdogs seeking to end a losing trend against Ohio Northern dating back to 2001, but the Blue Streaks did not keep up with the competition.

Ohio Northern pulled away early with a seven point run, which made the score 15-5. John Carroll could not come back and dropped the first set 12-25.

Things were different in the second set for JCU, as they added high pressure and eventually were within one point of tying the game. The Blue Streaks’ attack, however, was not enough. They went on to lose the second set 23-25.

In the third and final set of the evening, Ohio Northern was off to a quick start, leading John Carroll 15-5. The Blue Streaks were unable to counterattack and lost their last set of the season with a score of 13-25.

The Blue Streak leader in the tournament game was Cassi Calamunci, with 12 kills and 12 digs on the night. Brooke Hjerpe and Sarah Calabrese also contributed to the offense, tallying seven and six points individually. Defensive player Anna Coughlin led with 16 digs.

Calamunci was the only JCU player to garner All-Conference honors. She has now been named All-OAC in consecutive seasons.

JCU lost one senior this year.

John Carroll finishes the season with a record of 19-11 overall and 3-7 in the OAC.

The Blue Streaks encountered their fair share of ups and downs, but still had one of the most impressive seasons in recent years, tallying 19 wins, the most wins since the 2014 season.