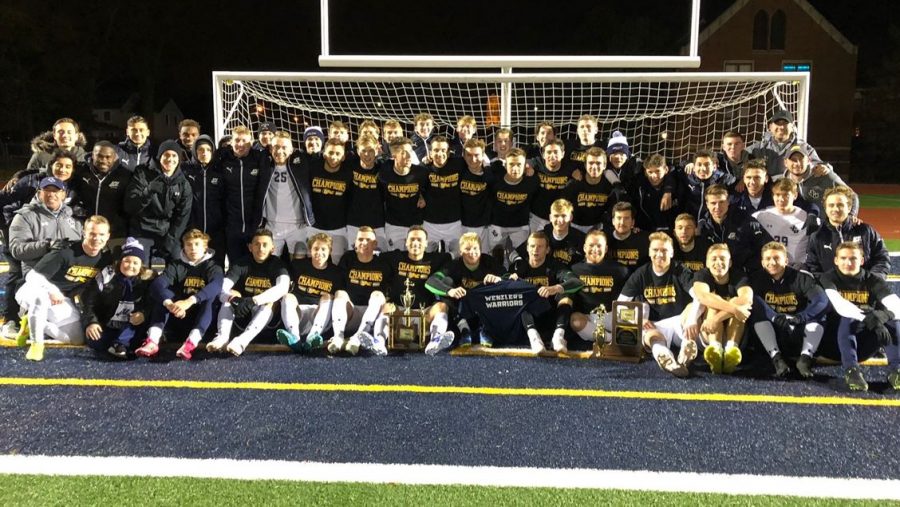 It was no surprise that the No. 7 team in the nation cruised once again into the OAC Tournament.

On a chilly Saturday night at Don Shula Stadium, the Blue Streaks went up against Otterbein, the second-ranked team in the OAC and the team that defeated Mount Union in the semifinal game to reach the championship round.

Otterbein and John Carroll last met Oct. 16, when senior defenseman Matt Nigro scored two goals, both assisted by junior midfielder Will Turritin. The Blue Streaks won the game in overtime when Nigro scored on a corner by Turritin.

On Saturday, Nov. 9, the two teams met once again in the OAC Final, battling for the Tournament Championship. It was a back-and-forth game, both teams having several chances to put the ball in the net until freshman forward, Mario Aboumitri, scored the winning goal for the second straight game.

The defense showed up for the Blue Streaks, stopping nine shots from the Otterbein offense to secure their second consecutive OAC Title.

“We played awesome all night,” said Larry Cersosimo. “We’re getting put on the map. We’re getting our name made, winning trophies and earning big wins.”

With the win, the Blue Streaks now lead the OAC for most tournament titles with eight.

With the win the Blue Streaks earned a spot in the NCAA Tournament. The Blue Streaks will look to this as another opportunity to boost their confidence.

“The mindset is game by game,” added Nigro. “We’re a different team than we were last year and the year before that. We want to go far and we want to win the last game of the season.”

The team is looking for redemption after an unexpected loss in the first round last year.

“Our goal all year has been to be the best John Carroll soccer team there’s ever been,” junior midfielder Ianiro stated. “We’re just going to take it one game at a time and see where we go from there.”

JCU will host the NCAA first and second rounds this weekend.