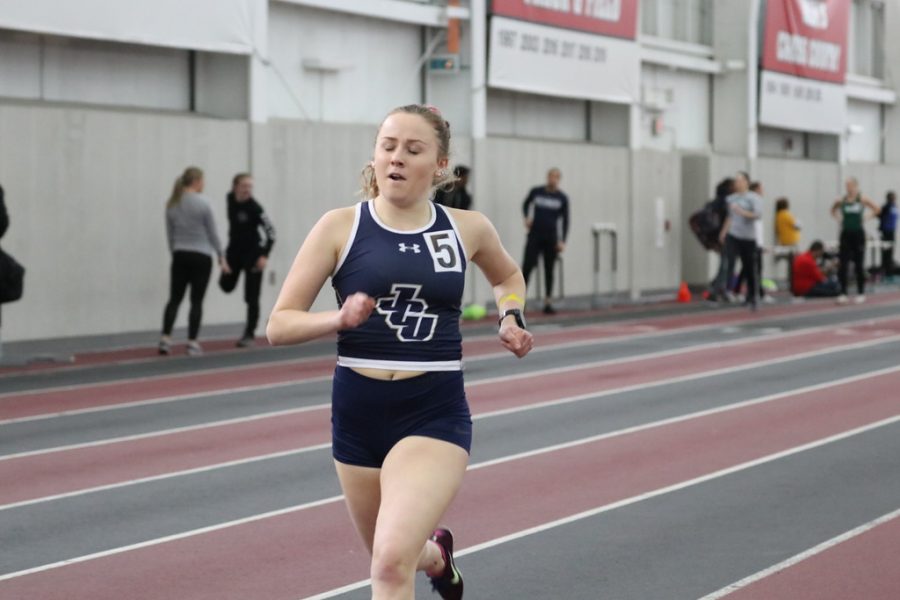 Sophomore Rory Vigrass competes in a race at Youngstown State.

The hard work of the John Carroll women’s indoor track and field team paid off this weekend when numerous contestants for the Blue and Gold broke their own personal records.

The record-breaking weekend launched at the University of Akron Invitational on Friday, Feb. 7, with sophomore Rory Vigrass finishing eighth in the 5K run with a personal best of 18:14.94 minutes.

Sophomore Cameron Bujaucius was the only other Blue Streak in Akron but did not finish the 5,000-meter race.

On Saturday, the team traveled to Tiffin, Ohio, to compete in the Tiffin Dragon Prix.

Sophomore Olivia Hurtt broke her school record once again in the weight throw event. She took fourth place with a mark of 15.73 meters.

Sophomores Madeline Scherle and Sara Johnson took sixth and seventh place respectively in the long jump, with marks of 5.01 and 4.97 meters. Scherle’s mark broke her personal record in the long jump.

Sophomore Mary Claire Smeltzer made her way onto the podium after finishing second in the 800-meter race with a new career time of 2:26.49.

The Blue Streaks will be back in action on Saturday, Feb. 15, in Westerville, Ohio for the All-Ohio Championships. The time is to be determined.