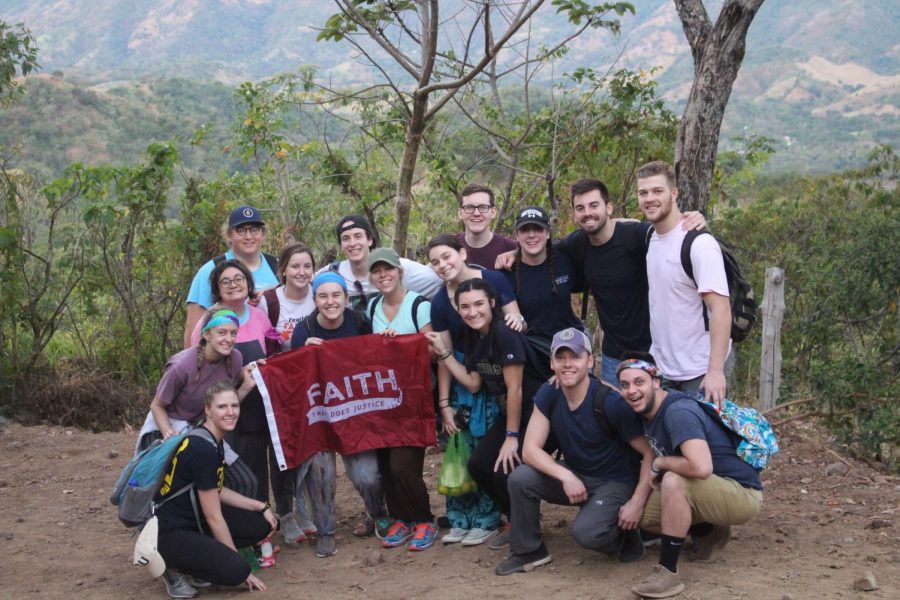 Trekking uphill at 5 a.m. is an experience that Lou Genovese remembers clearly from the January immersion trip to El Salvador. Genovese said this two-hour-long hike up the mountain was very special and memorable because it led to caves that were created by the Salvadoran people during their civil war in the 1980s.

Genovese, the director of purchasing at John Carroll, explained that the El Salvador immersion’s goal is to inform the participants about the social and economic challenges that impact Salvadoran migration.

“There are not a lot of opportunities there for people to prosper,” Genovese said. “The minimum wage is $300 a month, so you can understand how tough it is sometimes to live.”

Paityn Nicolosi, a student who attended the immersion with Genovese, said that she felt misled by the media about the state of El Salvador. She had expected violence and unrest, but she did not find that during her experience.

“We put a much bigger dent in the history of El Salvador than what we are led to believe and what the news has told me,” Nicolosi said.

“Because of that I thought we would be dealing with a lot more violence than what we actually dealt with. My parents were really against me going because they were scared for my life. The riskiest thing that happened to me [in El Salvador] was almost falling off the mountain path a few times.”

Genovese and Nicolosi agreed that Salvadorans take pride in their country’s history and culture. “What I found is that they are really proud of their history — despite being  faced with a lot of war, deaths and guerilla forces. It is not something that is brushed to the side; they are pretty open about it if you [ask],” Nicolosi said.

Genovese and Nicolosi said the immersion’s connection to JCU’s Jesuit mission was evident. Genovese explained, “We learned a lot about how the Catholic religion played a big part of the civil war in the ‘80s. Now, how religion is a big part of their lives. I think at a Jesuit school, there is some obligation for us to help people who want the help.”

Nicolosi connected the idea of church being a place for community as a tenet of both the Salvadoran and JCU culture.

Genovese brought the conversation to a broader context. “One of the bigger takeaways is [the Salvadorans] have a love for their country and they are looking for opportunities.” He wondered, “As a good steward in this world, how does the United States help other countries who are willing to do the hard work in order to be successful?”

John Carroll students who attended the immersion have been involved in an ongoing dialogue since their return, and they are trying to make a difference, according to Genovese.

“We’ve had a lot of discussions. Our students have focused on how they can make improvements. I’m really impressed with the students, because they didn’t just go on the trip and forget about it. They are still talking about it and how they can make a difference.”

Nicolosi said the group is considering the Red Dot Project, which aims to show solidarity to those migrants trying to cross the border. The group wants to create buttons with information regarding the migrants to hand out to students as a way to “give a face to human suffering.”