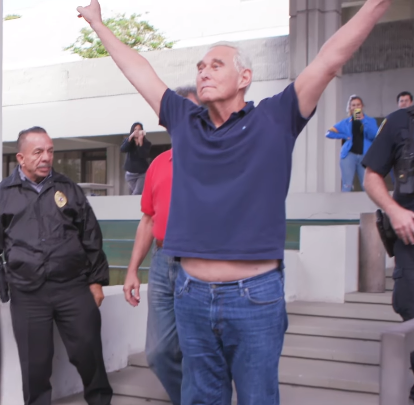 Roger stone made a V" for victory pose after his arrest"

On Tuesday, Feb. 11, Trump criticized how Attorney General William Barr and the Department of Justice handled the case of Roger Stone, a former Trump adviser accused of lying to congress, obstruction of justice and witness tampering. Both Trump and Barr faced even more backlash after the sentence recommendation was amended.
As of Friday, Feb. 21, over 2,000 former Department of Justice employees’ signatures have appeared on a letter posted to Medium.com, condemning Attorney General Barr and asking for his resignation. The letter argues that Barr and Trump interfered in Roger Stone’s criminal case, crossing unprecedented constitutional lines in an effort to help a political ally: “Governments that use the enormous power of law enforcement to punish their enemies and reward their allies are not constitutional republics\; they are autocracies.”
According to the New York Times, federal prosecutors recommended nine years in prison for the longtime Trump-confidant. Barr and “the Justice Department called that recommendation excessive and replaced it with a recommendation calling for ‘far less’ imprisonment,” the New York Times reported. On Thursday, Feb. 20 Stone was sentenced to 40 months in prison.
Stone’s criminal case sprouted from Special Counsel Robert Muellers’s investigation into Russian interference amid the 2016 election. According to a report by the New York Times, on Tuesday, Feb. 11, four prosecutors connected to the case withdrew following the Department of Justice’s decision to revise and refile the sentencing recommendation for Stone.
Stone’s 2019 trial consisted of prosecutors arguing the 67-year-old political advisor lied under oath, forged documents and “[engaged] in a relentless and elaborate campaign to silence the [witnesses].” NPR reported that Stone was convicted on felony charges of making false statements to Congress, obstruction of justice, and witness tampering.
On Tuesday, Feb. 11, Trump tweeted a condemnation of the Justice Department’s handling of Stone’s criminal case, calling the incident “a miscarriage of justice.” Directly following Trump’s tweet, the Justice Department amended and refiled Stone’s case, recommending another, unreleased prison sentence. In a following interview with ABC News, Barr complained that the President’s tweets and public statements undercut his authority, making “it impossible for me to do my job.” Barr also reaffirmed that decisions in his official capacity would be made independent of external forces, including the president and congress.
However, Trump’s possible interference in Stone’s case alarmed many who feel the White House should never violate law enforcement’s autonomy. In an interview with NPR, Julie Zebrak said Trump “doesn’t have the right to influence what the department’s prosecution and non-prosecution decisions are [in relation to] people who are under investigation or under prosecution by the Department of Justice.” Yet, in a public statement, Department of Justice spokeswoman Kerri Kupec defended the position that no Justice Department official consulted with any White House officials, including the president.
Stone, a former political advisor to both Presidents Richard Nixon and Ronald Reagan, who also advised the Trump campaign in 2016, bears his reputation as a “dirty trickster” without refute. Of the many notable details emerging in his case, the most memorable might be Stone’s threats against left-wing radio host and comedian Randy Credico, as well as Credico’s dog. In a threatening message to Credico, according to CNBC, Stone referred to the comedian as a rat and warned he would “take that dog away from [him].” Stone ended the message after telling Credico to “prepare to die, [expletive].”