Reflections on the U.S.-Mexico Border Immersion

In this time of COVID-19, Philip Metres, director of the Peace, Justice and Human Rights Program at John Carroll University, reminds us: “Keep in mind that the most vulnerable of our society and of the world will bear the worst brunt of this, as they always do.”

During this time of fear and uncertainty, there is an important need to take care of our loved ones and ourselves. However, we cannot forget to care and advocate for the people and communities who find themselves at the margins, such as the migrants at the U.S.-Mexico border, who are being most affected by this pandemic.

We wanted to share the experiences we had at the border through the immersion program. During spring break, we spent one week with the Kino Border Initiative, a binational organization that aims to make a humane, just, workable migration process between the U.S. and Mexico a reality. With KBI, we learned how we can humanize, accompany and complicate the issue of immigration, which has impacted each and every one of us in a different way. 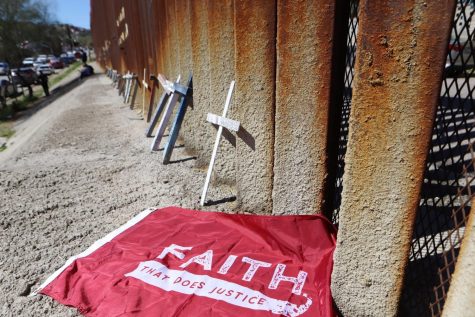 If I had to summarize my experience at Kino Border Initiative, I would resort to two adjectives: complex and relatable.

The “border” is a complicated issue and should be treated as such. The variety of encounters and conversations we had – with migrants, Border Patrol, the judge at the Tucson court – have clearly shown me that any black-and-white, right-or-wrong, wall-or-no-wall approach is a dangerous simplification that can lead to no real progress but only create divisions and fuel conflict. The appropriate response to a complex issue is an attitude of humble inquisitiveness: the willingness to ask and sit with uncomfortable questions, the honesty to grapple with one’s prejudices, the courage to observe reality from different angles before formulating judgments.

Yet, in a sense, the migration issue is also easy to relate to. If the sobering stories the migrants shared with me were certainly shocking and far removed from my personal life experience, this was not the case with their aspirations and dreams. The desire for safety and for freedom, the search for an honest, stable job or for a solid education for one’s children are the same motives that drove my parents’ and my own actions.

I am convinced that it is this profound, existential relatability that is the most appropriate starting point to understand a complex issue and face it without slipping into oversimplified dichotomies.

During my time at the U.S. Mexico border with the Kino Border Initiative, I learned and experienced things that I never even dreamed I would. KBI’s mission to “humanize, accompany, and complicate” the issue of immigration was a perfect strategy for how to structure the way in which I approached the whole experience.

I met many migrants who have been deported or who were attempting to seek asylum in the United States. Through these interactions, this issue was humanized. I still remember many of their faces and names to this day. Listening to their stories allowed me to accompany these migrants. Even though I could not do much to help them, many just wanted to be heard by someone so that their stories are not lost or forgotten.

Back home in Ohio, it is easy for me and many other people to form opinions about immigration policies just based on a few stories on the news. Other than that, we do not give the issue much thought. Ever since I returned from the border, I think about this issue every day and how complicated it really is. I realized that there is no simple solution to the immigration issue at the border, but, above all, I also realized that the United States is ultimately responsible for deciding the fates of thousands human beings, many of whom are simply trying to find a better life or reunite with their families.

My only regret from this experience is that not everyone in the United States can see with their own eyes the people that our policies affect. I have learned that it is easy to form opinions when you are far away from a social justice issue, but once you experience it first-hand, it will change everything.

There’s absolutely nothing you can do to prepare yourself for the things you will see when visiting the border. The media, internet and politics are filled with misinformation and biases. I like to think I am informed enough to select appropriate and educational information, yet the immersion trip changed a lot about my previous beliefs.

The issue at the border is a humanitarian issue. There are people dying while we debate wall or no wall. These are people with hopes, dreams and families, like us. And while we debate wall or no wall, people will die: “What kills people,” he says, “is the politics of stupidity that rules both sides of the border” —  Luis Alberto Urrea, “The Devil’s Highway”

Do this in remembrance of me.

Many people were shocked and even confused to hear I was going on an immersion trip to the United States-Mexico border. “Why waste your time? You’re not even religious,” was a very common response to my announcement. To be honest, their concerns had some validity. I was going on a trip through Campus Ministry and hadn’t attended a mass in over five years. I was so worried about my religiosity, or lack of it, hindering the trip. But now as I reflect, I realize that my concerns were such a minimal part of my experience at the border.

When we arrived, Fr. Peter Neely, S.J., the associate director of education at the Kino Border Initiative, promoted the idea to “do this in remembrance of me,” as Jesus said at the Last Supper. I struggled to connect the quote to the rest of the week. At times, I did not necessarily connect God’s work to mine while serving food in the Comedor, and I did not feel the Lord’s presence in the streets of Nogales.

But I have come to realize what this quote means to me, as I reflected on some of my most impactful experiences during my immersion: sitting at the wall overlooking the city, viewing the process of streamline or simply meeting individuals like Manuel, Pablo and so many others … It’s not necessarily what I did while I was in Nogales, but how I will be impacted by this experience moving forward.

Even if I do not believe wholeheartedly in scripture, I can continue God’s work to stand in solidarity with the poor and vulnerable through continued advocacy for change at our southern border. I can choose to take a stand against this humanitarian crisis and be willing to call out those who have the power to make change. I can have informed discussions with others to open their eyes to the tragedies occurring within our own country.

But, most importantly, I can make sure to never forget. And in this remembrance, I can make every decision with those who are affected and oppressed by the issue of immigration in my conscience.

To say my immersion trip was life-changing is definitely an understatement, but it is the best I can do. As I sit here, quarantined and writing this reflection, I still struggle to process all that happened. But I will never forget how I felt in those special moments spent at the United States-Mexico border and the promise I made to myself on our final day: Once returning to my bubble in Cleveland, Ohio, I will continue living my life In Remembrance of Them.

“What did you do at the border?” so many have asked. We listened.

We also heard about Henry’s love for music and bonded with him over our shared love for the singer Bad Bunny. We heard Paulino proudly brag about his oldest daughter, who is pursuing a career in medicine. We heard Joshua’s joyful laughter, as we played peek-a-boo.

I was struck by the profound similarities and differences between myself and the migrants. While I saw myself and my family members in many of the people we met, our circumstances could not be more different.

When we left Nogales, we returned home to our normal routines. However, the people we met at the Comedor remained in Mexico without the freedom to go home. Instead, they were faced with a future of uncertainty — either facing an asylum hearing that may never come or risking their lives once again crossing the desert.

I was made starkly aware of my privilege through this experience. Although I walked in the shoes of migrants, I realized that we are not on the same path, divided by systems of injustice that use fear to drive us apart. Yet at the root, we are all members of the same human family, inherently connected by our passions and dreams: A desire for safety and stability. A love for our families and friends. A faith in God.

By listening to the migrants’ stories, I learned that immigration is a human issue. Therefore, we must work toward an immigration system that recognizes this reality so that we, as a country, can embrace Henry, Paulino, Elena and Joshua with the love they deserve.