The Carroll News • May 11, 2020 • https://carrollnews.org/3413/sports/mark-fino-retires-as-john-carroll-swimming-diving-head-coach/ 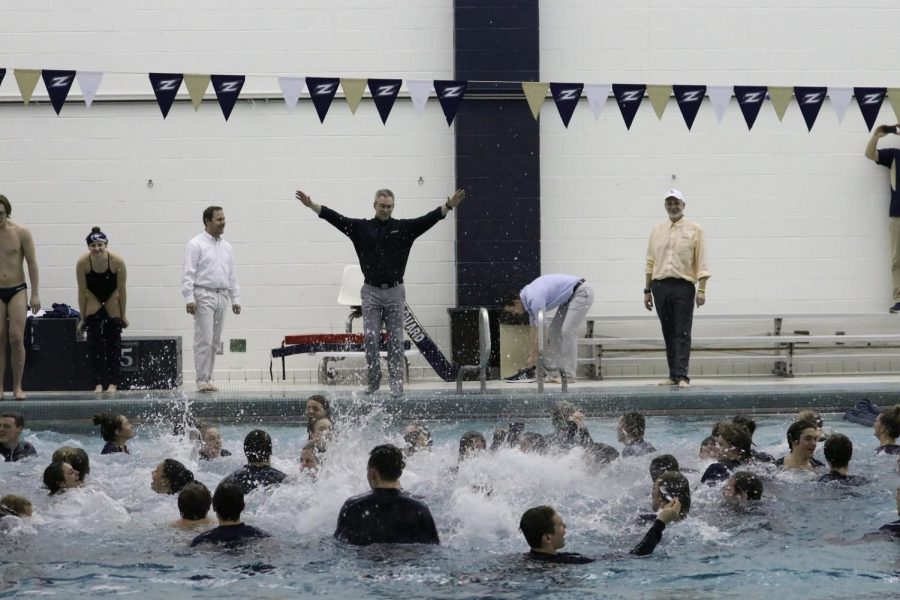 The reigning Ohio Athletic Conference swimming and diving champions will be without their OAC Coach of the Year for 2020 and beyond.

John Carroll University head swimming and diving coach Mark Fino is stepping away from the program and retiring, which he confirmed in an interview Monday evening. Fino’s wife accepted a new job in Atlanta, and he is taking on the role to coach his two boys, Jonathan and Nicholas.

“It was one of the more difficult decisions I’ve ever had to make,” Fino said. “It came down to my boys. We are fortunate enough to have the opportunity that I can stay home and be home for them when they get home from school. I can also be there and help them out as they go through youth sports.

“I am retiring to be a stay-at-home dad.”

Fino, who coached both the men and women, took over the JCU swimming and diving program in 2013 and has built them to become a perennial powerhouse in the OAC. It only took Fino and his staff three years to capture their first OAC Championship on both the men’s and women’s teams. The men had gone 13 years without a conference championship; the women eight years.

In 2017, the Blue Streak men unseated 12-time consecutive conference champion, Ohio Northern. They went onto claim the next four OAC titles. The women prevented Mount Union from earning a three-peat. They went on to win the past four years as well.

This past season, Fino led the men to an undefeated record with a 967-point victory in the conference championship. The women’s OAC title three months ago came in even more dominating fashion. The Blue Streaks claimed gold with a margin of victory of 379.5 points.

Fino and his staff have been recognized as OAC Coaching Staff of the Year seven times between both the men and women.

“This past season was one of the strongest teams that I’ve ever had in my career. Bar-none. To walk away… that’s hard. Really hard,” he said. “Walking out on top doesn’t make it any easier.”

Although there could be opportunities to further his career in coaching, Fino said he has “no plans” to return to coaching.

Fino graduated from University of Detroit Jesuit High School in 1998. After spending seven years at John Carroll, Fino has spent a decade of his life modeling the Jesuit way.

“The philosophy of being a ‘Man for Others’ is how I live and how I coach. I have the ability to serve my family. If I am honest about those ideals, I am sacrificing my career to be here for my family,” he said.

Before John Carroll, Fino spent 12 seasons coaching at Oberlin. During his tenure there, they broke over 70 school records. However, what he has built at John Carroll will be atop his greatest career accomplishments.

“I was a boy scout as a kid. You were always taught to leave the campsite better than what you found it at,” he said. “I have always carried the idea of leaving something in a better position than when you took it.

“The program is in a better spot than when I arrived.”