by ltmayers on the Creative Commons

On June 26, the U.S. House of Representatives approved a bill that would make the District of Columbia the 51st state in the union.

The vote passed 232 to 180, with every Republican and one Democrat voting “Nay.” Although this bill has passed the House of Representatives, it will undoubtedly die in the Senate on Republican Majority Leader Mitch McConnell’s desk.

So then, what is the case for Washington’s statehood?

The average congressional district houses between 500,000 and 1 million constituents. In 2018, according to U.S. Census Bureau data, the district was home to approximately 705,000 people, which is well within the average district population and more than states like Wyoming and Vermont.

Washington currently has some representation. However, Delegate Eleanor Holmes Norton was not able to vote on the bill for statehood.

In fact, as a delegate, she is a non-voting member of the U.S. House of Representatives. Delegates are allowed to speak on the floor and introduce bills but are not allowed to vote. Currently in the house, there are six non-voting members, one for each of the following locations: Washington D.C., Puerto Rico, the American Samoa, Guam, the Northern Mariana Islands and the U.S. Virgin Islands.

The difference between the district and the other territories is that, while residents of Washington pay federal income taxes, the citizens of other territories do not. Perhaps the craziest part of this is that the district pays the highest federal income tax per capita of any state, according to the government-run D.C. Statehood page. When added up, Washington residents pay more in taxes than people in 22 other states, and yet in Congress, the city has no jurisdiction over how those tax dollars are spent. 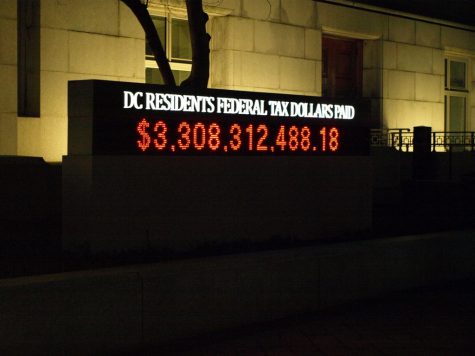 The idea of representation for the district started in the 1960s, as the 23rd Amendment gave Washington electoral college votes. In 1971, it was granted a non-voting member of Congress, and in 1973, the right to elect its own local government.

Under Congresswoman Eleanor Holmes Norton’s plan, the district would be renamed the “Douglass Commonwealth,” still retaining its “D.C.” title. The actual federal district would then be restricted to government buildings, leaving the rest of the district to become the state territory.

The issue with Washington statehood is quite partisan. The city, like many large cities in America, is largely Democratic and progressive. In 2016, according to the D.C. Board of Elections, President Donald Trump only garnered 4% of the vote in the city.

If the district were to become a state, it would undoubtedly be a blue state, giving Democrats one more seat in the House of Representatives and two more seats in the Senate. Therefore, as many things are, the district’s statehood is stuck in the mud of partisan fighting, with some Republicans openly against statehood for the exact reason that it would give Democrats more opportunities to win power.

Trump himself has explicitly expressed these points, in an interview with the New York Post, saying “D.C. will never be a state. You mean District of Columbia, a state? Why? So we can have two more Democratic — Democrat senators and five more congressmen? No, thank you. That’ll never happen.”

The case for D.C. statehood most likely will not be revisited, nor successful, as long as Republicans are in power, and the 700,000 residents will continue to be taxed, unrepresented and unsatisfied.