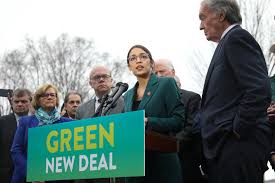 In 2018, the world’s leading climatologists, the Intergovernmental Panel on Climate Change, met to lead a panel discussion. During this panel, the scientists agreed that if the global temperature reaches 1.5 degrees Celsius higher than where it was before the industrialization of the 1960s, then there would be catastrophic effects on the rest of the world, including mass migration, wildfires and deadly heat stress.

Currently, the world is on track to hit a growth of more than 2 degrees Celsius, according to the IPCC. Change is needed, and soon. A plan has been created, sponsored by U.S. Rep. Alexandria Ocasio-Cortez and Sen. Ed Markey, called the Green New Deal, aimed at alleviating some of the pressures of climate change.

Though the Green New Deal has been used by conservatives as a weapon to mock socialists and liberals, but the actual bill doesn’t do much. A mere 14 pages, the Green New Deal is only the first step in a long journey to tackling climate change.

The legislation is composed of two parts. The first part contains the question of what America has to do in order to deal with the impending crisis. Following scientific research, it says we need to stop burning fossil fuels “as much as technologically feasible.”

That, of course, will create new jobs, new industries, new companies and will completely redesign our modern economy. This plan, however, is no utopia. Doing all of this will have a colossal cost. We’ll have to completely rethink how we use energy in our society.

The Green New Deal conceptualizes the fact that it is far too late to move away from fossil fuels slowly. The bill itself says “net-zero global emissions by 2050.” This isn’t net-25 or net-10 or even net-one. It is net-zero. Zero oil industry. Zero natural gas industry. No coal, no solid fuel engines, no internal combustion. Zero.

This is where the massive amount of damage comes from and where conservatives really like to hold on. Completely removing fossil fuels from the economy means that millions of people are going to lose their jobs, potentially their healthcare and their homes. Taking this environmentally necessary action is going to cause many to struggle.

Luckily, there is a solution found in the second half of the bill. This component acknowledges that Americans in these industries are going to undergo significant turmoil, specifically in times like these when the only reason people aren’t being evicted is because of a federal moratorium and when people hold onto stimulus checks like gold.

The bill promises safety nets during the transition away from fossil fuels. It has a federal jobs guarantee, public employment and investment, universal healthcare, re-education and training for newer, high-paying jobs. These are the things that make the Green New Deal such a bombshell: rights that should be promised to every single citizen of the richest country in the history of the world. Yet Republicans get too caught up in lobbyists’ pockets, hoping to preserve industries that are killing the planet.

An important piece to note is that the bill doesn’t say anything about coal workers, oil workers or natural gas workers. The bill just says workers. It is preserving the legitimacy of all people. The second half of the bill is put in place to prevent inequality from getting worse and stop the 1% from widening the gap between corporate elites and the working class during the creative destruction of the Green New Deal.

Without these precautions, people who have historically been ignored or even attacked by the U.S. government — poor people and people of color — will end up even worse off. The Green New Deal says that we should rebuild the American economy, or as Joe Biden says, Build Back Better, so that opportunity may flow more fairly.

Just to name a few, Sen. Mitch McConnell has called the Green New Deal a “destructive socialist daydream.” President Donald Trump has described it as “baby talk,” and Sen. Joni Ernst said that it would be “wasteful and reckless spending.”

The Green New Deal is a longshot. It’s going to take the cooperation of Democrats and Republicans to agree on climate change and work to get something done. But it is possible, just the same as it was possible for President Franklin Delano Roosevelt to pass his New Deal, bringing America back from the brink of economic collapse.