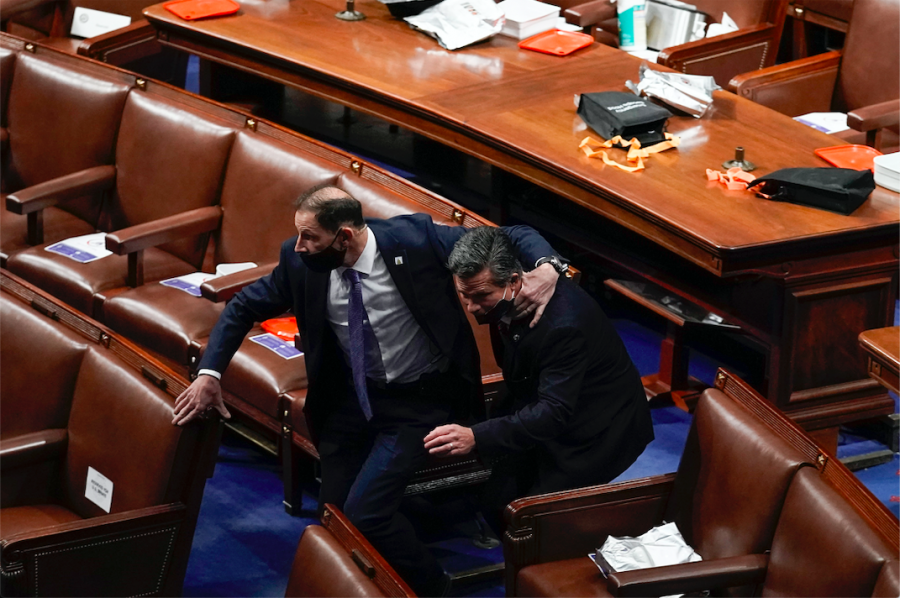 Lawmakers evacuate the floor as protesters try to break into the House Chamber at the U.S. Capitol on Wednesday, Jan. 6, 2021, in Washington.

The world is watching. “Trump remains president of chaos, thriving on violence, rifts, divisions,” read one French headline following the violence on Capitol Hill Wednesday. The British “i” newspaper put it more bluntly, headlining their Thursday edition simply: “Anarchy in the USA.”

For the first time since August 24, 1814, the United States Capitol was overrun Wednesday, momentarily bringing core democratic functions to a hault. These insurrectionists came not advocating for democratic principles but, rather, for the cessation of democratic governance itself. As founding father John Adams put it over two centuries ago, the American government is a “government of laws, not men.” The rule of law is the very principle that separates democracy from autocracy.

But on Jan. 6, a group of insurrectionists, spurred by Donald Trump’s rhetoric, violently assaulted that principle, insisting that they, rather than the democratic electorate of the United States, get to decide the outcome of a presidential election. This is a dangerous and unsettling state of affairs to which The Carroll News, in the strongest of terms, objects.

“This is how election results are disputed in a banana republic – not our democratic republic,” insisted the former Republican president George W. Bush. The reluctance of the president and some other current Republican leaders to follow Bush’s lead and outright condemn the lawlessness Wednesday is absolutely stunning. And anyone, interested in anything beyond myopic partisan squabbles, can see just that.

Over 81 million Americans spoke on Nov. 3, casting their votes against Trump, and the indefensible conduct of a few could never undo that. But we find the precedent set Wednesday to be deeply disturbing.

The United States had witnessed almost 250 years of peaceful transitions of presidential power. But after the violence, lawlessness and death Wednesday, that long tradition of peace has emphatically ended. The blame falls squarely at the feet of Trump’s dangerous rhetoric.

The attack Wednesday was not about partisan politics. It was a brutal strike at the core of liberal democracy — a strike that reverberated across the globe. The consequences for all those involved must be severe. This is the only way to prove to the world and ourselves that the rule of law remains strong in America.