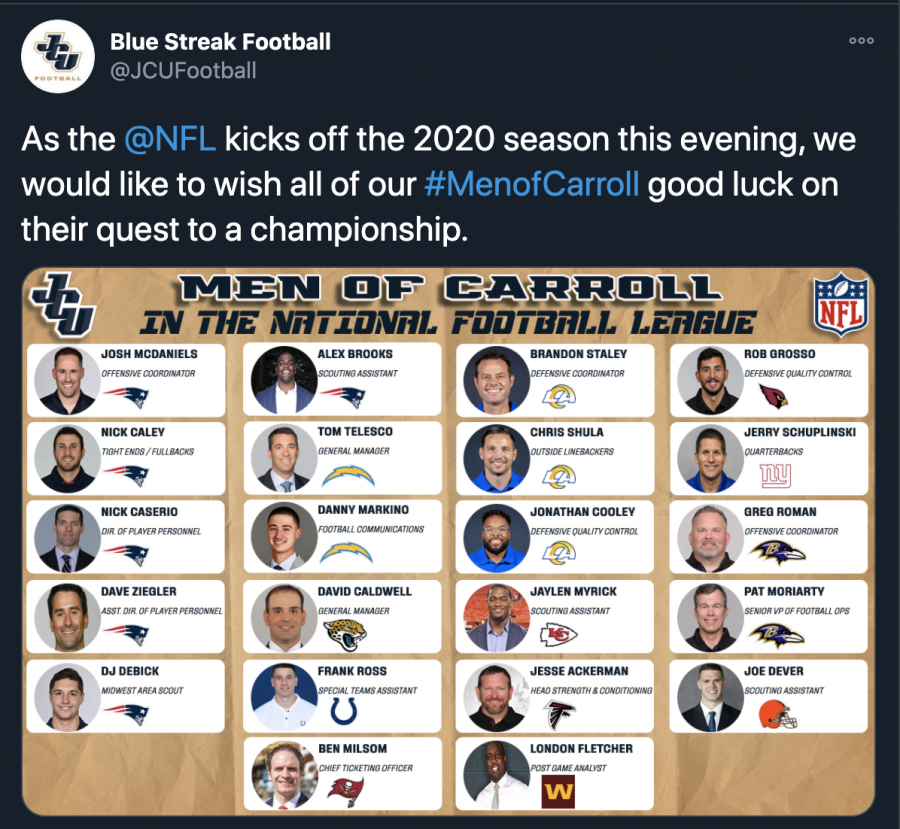 Sports at an amateur level are especially experiencing the effects of the pandemic. Many sports teams around the country have not played games since the beginning of the COVID-19 pandemic in mid-March. John Carroll University is no different, as the Blue Streaks have not taken the field in months, with a definite return date not yet set. However, the Blue Streaks’ athletic teams have still kept in touch with the community through social media.

“Social media is vital, particularly during the pandemic,” said Joe Ginley, the new sports information director. “Our goal, first and foremost, will be to keep John Carroll fans and alumni connected with the Blue Streaks. We will also look to show potential student-athletes what JCU is all about, especially in terms of our program, mission and facilities. We’ll be creative on social media to tell the John Carroll story, and we’ll be trying out new ideas, such as launching a JCU Sports Tik Tok. We’ll be setting high goals, which include building the best social media presence in the Ohio Athletic Conference.”

Since fall football will not be played on campus, the Blue Streak football Twitter account, @JCUFootball, has posted weekly highlights of the team’s games from each week during the 2019 season. The Blue Streak football program has also gotten fans excited for the return to play with highlight videos of players, such as a key member of the secondary Tyshawn Jones. On the Instagram end of things, the football program has also featured top-notch graphics of incoming freshman players.

The always-strong social media presence of the JCU Men’s Basketball team has gotten fans excited with throwback pictures and commitment posts from future stars like Connor O’Toole, the brother of current hooper Owen.

John Carroll’s lacrosse program has also found success on social media, as the Lax team has posted three-player commitment tweets and kept up their spectacular work with player GIFs.

The club hockey team has also stayed connected to fans by posting commitment graphics as well as doing a new jersey reveal and weekly “guess the player” Instagram stories. While she could not be reached for comment, Lydia Holman has done a phenomenal job keeping hockey fans up to date since the team last took the ice.

“It feels great,” said Clay Gazdak, an incoming freshman defenseman when speaking of his commitment post from @hockeyjcu. “Getting the recognition and congratulations from friends and family that saw the post was exciting, and I’m just excited to meet all the new incoming freshmen and start off my hockey career at JCU.”

While it has not been a simple task to keep consistent posts running across all platforms, the John Carroll athletic page social media teams have spent their off-months by knocking homer after homer out of the park.