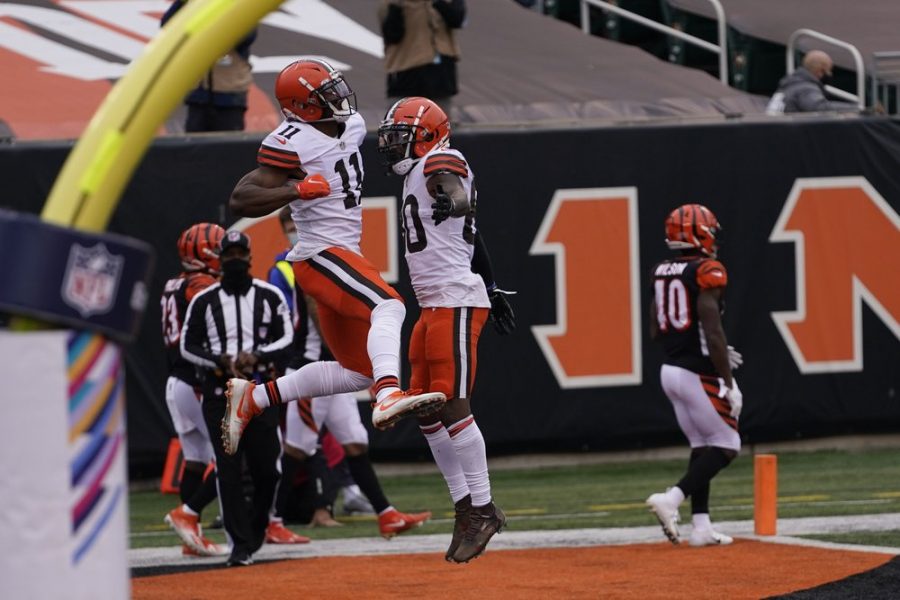 Cleveland Browns' Donovan Peoples-Jones (11) celebrates his touchdown reception with Jarvis Landry (80) during the second half of an NFL football game against the Cincinnati Bengals, Sunday, Oct. 25, 2020, in Cincinnati. (AP Photo/Bryan Woolston)

How many times am I going to write about a crazy Cleveland Browns game this season? Apparently every week.

The Cleveland Browns are the only team in sports that can make a fan so incredibly disappointed and then five minutes later make them ecstatic. That’s pretty much how last Sunday went.

By 1:30 p.m., I was texting a fellow Browns fan that the Browns should trade Ryan Fitzpatrick to take starting quarterback Baker Mayfield’s name on the depth chart. Then, Mayfield ripped off 22 straight incompletions and five touchdown passes for one of the most impressive performances that I have ever seen by a Browns quarterback. None was more impressive with 11 seconds remaining in the game.

After the Bengals and rookie passer Joe Burrow drove down the field 75 yards to give his team the 34-31 lead, Mayfield quickly responded by placing the Browns in field goal territory to tie the game. The very next play, Mayfield hit rookie Donovan Peoples-Jones for the game-winning touchdown.

I screamed at the top of my lungs and then sat back down because I was out of breath. The Browns improved to 5-2.

This season has been like no other that I have experienced in my lifetime. My best Browns memory is when Cleveland started off the 2014 season 7-4. They proceeded to lose the next five games. 2020 is different.

Do I speak too soon?

The Browns are without their best two players on offense. Odell Beckham Jr. is done for the season and Nick Chubb is out for the near future. If the Browns win this Sunday, they almost guarantee their chances to go to the playoffs.

I probably shouldn’t hold my breath.

However, the Browns have the best defensive player in the NFL and their head coach is all but a lock for Coach of the Year. I think Mayfield is good. But as we’ve seen so many times before, being let down is more common than winning football games in this town.

I am convinced this Browns team is different. They’re winning games they had a 0% chance of winning even last year. So, should it be wrong of me to think the Browns are a shoo-in to make the playoffs? I don’t think so.

I am confident that with teams like the Giants, Jaguars and Jets still on the schedule that the Browns will cruise their way into the postseason. But as I have always said before, I’ll see it when I see it.