Odell Beckham Jr. out for the remainder of the 2020 season due to a torn ACL 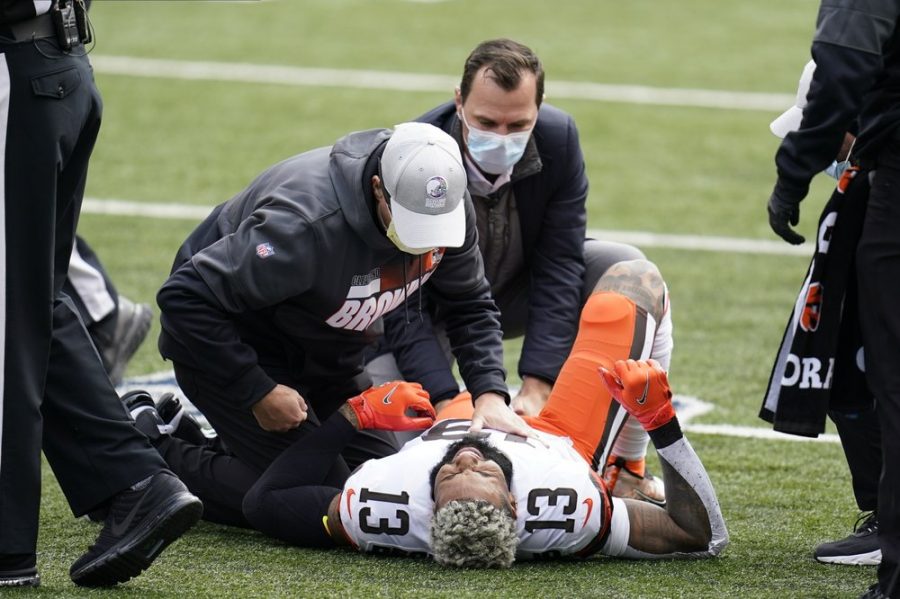 Cleveland Browns' Odell Beckham Jr. (13) is examined during the first half of an NFL football game against the Cincinnati Bengals, Sunday, Oct. 25, 2020, in Cincinnati. Browns star wide receiver Odell Beckham Jr. will miss the rest of the season after tearing a knee ligament during Sunday's 37-34 win at Cincinnati. (AP Photo/Michael Conroy)

The Cleveland Browns will be without their star wide receiver for the remainder of the 2020 season.

Odell Beckham Jr. suffered a torn ACL against the Cincinnati Bengals, the team confirmed with an MRI on Monday morning. In a subsequent move, Beckham was placed on injured reserve.

Beckham has had a tumultuous time since being acquired by the Browns in March of 2019. In his first season with the Browns, he averaged a career-low 4.6 receptions per game while battling an injury that required core muscle surgery in the off-season.

Over the course of his NFL career, Beckham has had his share of injuries. He began his NFL career sidelined with a hamstring before blossoming into one of the best young receivers in the NFL. Early in the 2017 season, Beckham fractured his ankle, which resulted in him missing the entire season.

On Oct. 4 against the Dallas Cowboys, Beckham had his best game as a Cleveland Brown. Beckham totaled 154 offensive yards and three touchdowns in a 49-38 Browns victory.

“I am incredibly disappointed for him. I know injuries are a part of this game, but I just hate to see that,” Cleveland Browns head coach Kevin Stefanski said. “I am obviously wishing him a very speedy recovery. He rehabbed like crazy this off-season, coming off of surgery, and was ready to go. I think he’ll be ready to attack that. I am obviously disappointed for him.”

The Browns will move on without Beckham this Sunday with a game against the Las Vegas Raiders.