Ohio Sen. Rob Portman will not Seek Reelection in 2022 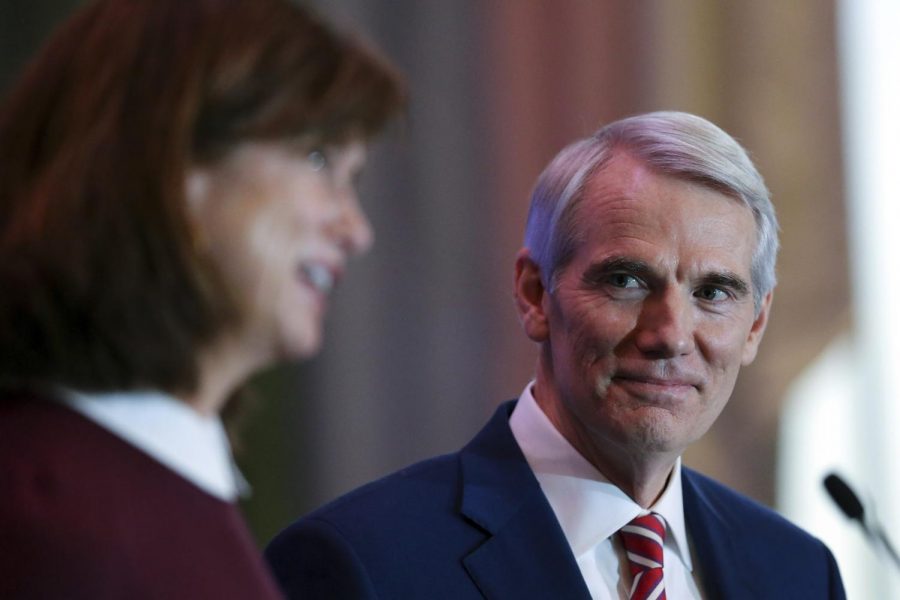 U.S. Sen. Rob Portman listens as his wife Jane answers a question after he announced Monday, Jan. 25, 2021, at the Hilton Hotel in Cincinnati, Ohio, that he will not be seeking re-election when his term is up in 2022. (Kareem Elgazzar/The Cincinnati Enquirer via AP)

Republican Sen. Rob Portman of Ohio announced Monday that he would not be seeking reelection in 2022, citing “partisan gridlock.” This has started a major stir among Ohio Republicans interested in taking the coveted Senate seat.

Portman has a long-time standing within the Republican Party, starting his career as the director of legislative affairs under President George H. W. Bush. Later, in 1993, he was elected a member of the House of Representatives, serving until 2005, when President George W. Bush called on him to become the U.S. trade representative. Bush called on him again in 2006 to become the director of the Office of Budget and Management, a cabinet-level position.

Finally, in 2010, Portman was elected to the United States Senate and reelected in 2016. During his time in the Senate, Portman was considered as a potential vice presidential candidate for Gov. Mitt Romney, a role that eventually went to Paul Ryan.

Rep. Jordan is one name that brings up a large amount of speculation, as he currently sits in a safe congressional district, as well as having prominence in the House of Representatives, sitting on the Judiciary Committee.

Mandel has a possible advantage lying in an active federal campaign account with funds totaling $4.3 million. For Husted, however, his advantage comes in his close ties with Gov. Mike DeWine, who boasts an 85% approval rating when it comes to his handling of the coronavirus, according to a Baldwin Wallace poll.

According to Cleveland.com, two Ohio Republicans believe that Rep. Anthony Gonzalez is “privately exploring running for Portman’s seat.” Gonzalez is one of 10 Republicans in the House of Representatives who voted to impeach President Donald Trump.

As for the Democrats, fewer names are crowding the field. No candidate had indicated plans to run for the seat as of Jan. 25.

Seeing as Ohio is a fairly Republican state, it is not likely that people such as Rep. Tim Ryan or Leader Emilia Sykes will run for the seat unless they truly believe that the seat is winnable. The more likely candidates will be those who are willing to give up their current office or position.

President Trump won Ohio’s electoral votes in 2020, beating President Joe Biden by 8% or 500,000 votes. This means any Republican has a fairly good chance of winning the Senate seat after winning the primary.