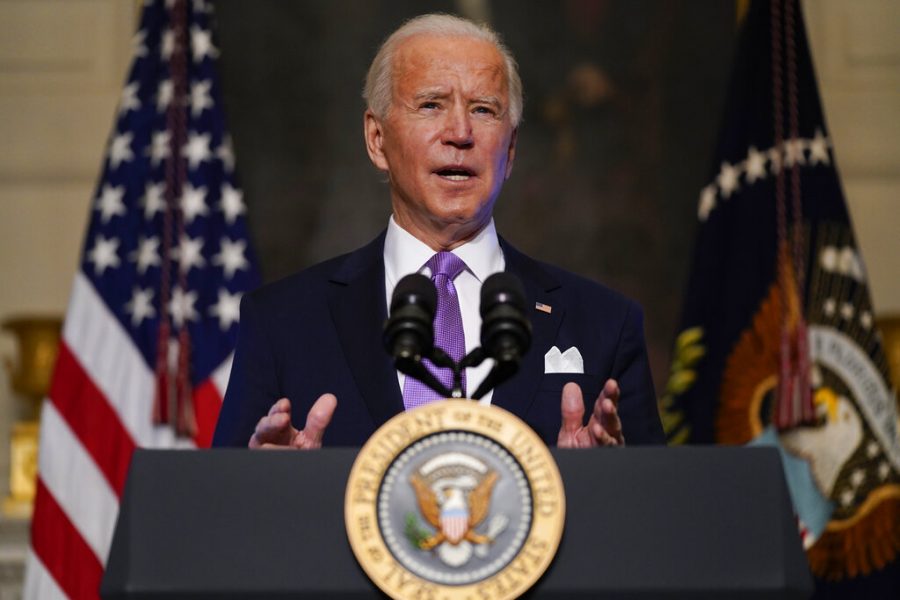 President Joe Biden delivers remarks on COVID-19, in the State Dining Room of the White House, Tuesday, Jan. 26, 2021, in Washington.

A Jan. 20 Washington Post article title reads: “The campaign to impeach President Trump has begun.” No, not Jan. 20, 2021. This wasn’t regarding the most recent effort to impeach the former president. This article was published minutes after Trump was sworn in on Jan. 20, 2017.

On his first day in office, what had he done? The answer: nothing. He did nothing impeachable before, during or after his presidency yet he has continuously been the target of relentless political attacks from partisan Democrats and “never-Trumpers.”

Those same political hacks now have the audacity to utter the word “unity.”

Don’t get me wrong; I want unity. Regardless of who sits in the Oval Office, I want that individual and their administration to be successful. Their success means American success. I want partisan divides to be bridged because there is no healing with constant adversarial attacks.

The issue is the attacks we saw over the last four years haven’t ceased. Rather, they have accelerated dramatically with authoritarian rhetoric.

Why is this? Weren’t we told that once we rid ourselves of the bad, evil, no-good orange man, all would be happy and prosperous? Unfortunately, the political left doesn’t hate Trump; instead, they only hate Trump because they hate Trump supporters.

Trump is just the face of a movement that seeks to put America first while working against the Washington establishment, Republicans and Democrats alike. The elites hate these voters and wish to censor, erase and re-educate them until they are obedient to their policy preferences.

Don’t believe me? Let’s review what’s been going on.

Normally, before an incoming administration, the party gaining (or retaining) power enjoys a honeymoon period while they outline policy aspirations. Instead, articles of impeachment were brought forth on a president exiting office within days.

House Speaker Nancy Pelosi, D-Calif., was incapable of negotiating a COVID-19 relief bill for months, yet she was able to get articles of impeachment on the House floor in a matter of days. The Democratic-controlled House subsequently voted 232-197 in favor of impeaching Trump. The articles have been sent over to the Senate where a trial awaits.

Harvard Law School Professor Emeritus Alan Dershowitz, a Democrat, recently outlined in the Wall Street Journal how it is impossible to hold a trial for an impeached former president and private citizen because there is no constitutional basis for doing so. He stated: “The Constitution is clear: ‘The president . . . shall be removed from office on impeachment . . . and conviction’— not by the expiration of his term before the impeachment process is complete. It also mandates that ‘judgment in cases of impeachment shall not extend further than to removal and disqualification’— not or disqualification.”

There is simply no jurisdiction for such a trial, but they plan to proceed anyway. Can we impeach and try George Washington? JFK?

The entire premise of the impeachment trial is centered around the egregious acts of those who decided to riot and storm the Capitol building on Jan. 6. The claim is that Trump incited the violence and told them to mount a siege.

Outside the White House, Trump stated during his speech: “I know that everyone here will soon be marching over to the Capitol building to peacefully and patriotically make your voices heard.”

“Peacefully and patriotically” doesn’t sound like inciting violence. Democrats point to language about the necessity to “fight like hell” as grounds for incitement. I think these individuals are cherry-picking. Nearly every American politician uses language of “fighting” for a cause they seek to promote through legislative or political action.

Words do matter, that’s why I’m surprised a plethora of Democrats have used much more questionable language and received no threats of censorship. Here are a few examples:

Sen. Cory Booker, D-N.J.: “Please don’t just come here today and then go home. Go to the Hill today and get up in the face of some congresspeople.”
Rep. Maxine Waters, D-Calif.: “And if you see anybody from that Cabinet in a restaurant, in a department store, at a gasoline station, you get out and you create a crowd. And you push back on them. And you tell them they’re not welcome anymore, anywhere.”
Rep. Ayanna Pressley, D-Maine: “There needs to be unrest in the streets.”

The first breach of the Capitol barricades occurred at 12:45 p.m. According to NPR, Trump’s hour long speech concluded at 1:11 p.m. Acts of violence had already begun. I don’t know many people who are capable of making their way from the White House to the Capitol building that quickly.

Targeting a president that has already left office doesn’t project unity. It’s abundantly clear that the Democratic party set a dangerous precedent by weaponizing the impeachment process against their opposition. In retaliation, a Republican congresswoman has already introduced articles of impeachment against President Joe Biden. This move was just as cynical and ridiculous as when the Democrats did it.

The events that occurred at the Capitol building were grotesque and unacceptable.

Before the Capitol riots, liberals deemed anyone raising election integrity concerns as attacking democracy. The Washington Post published a disgusting anti-Semitic cartoon depicting Republican lawmakers who supported election challenges as rats (see: here). Following the Capitol siege, others have attempted to lump all Trump supporters with rioters, calling for their “de-Baathification.”

Nearly 75 million people voted for Trump in November. I have yet to meet anyone who has shown support for what we saw on Jan. 6.

Democrats challenged electoral results in Congress following the last three elections of a Republican president (including an impeachment manager, Rep. Jamie Raskin, D-Md.). Yet if you dared question results in states that ran elections contrary to their state constitutions, you were the problem.

Political activist Don Winslow posted a video with over four million views on Twitter that labeled all Trump supporters as domestic terrorists, not just those who stormed the Capitol. The video explicitly states that these “domestic terrorists” are regular people among us.

Rep. Alexandria Ocasio Cortez, D-N.Y., has called for blacklisting those who had worked with the former president.

Do you see a trend here? These individuals aren’t seeking unity. They seek a means of attacking the free press and speech of those with whom they disagree.

Amazon Web Services took the Twitter alternative Parler offline, an app used predominantly by conservatives. Their excuse was finding incitement of violence on the app. If these standards were applied evenly, Facebook and Twitter would also be removed from the internet. In reality, no platform should be removed since they all employ people to actively moderate their own content.

Authoritarians label their political adversaries as enemies of the state and assert they are justified in stripping free speech and press.

Violent protesters seized public property in Seattle and unlawfully declared an autonomous zone. Portland saw protests, many declared violent riots, for weeks this past summer. Just this week, Antifa rioters took to the streets of Tacoma, WA. Did most or all Democrats condemn these acts? The answer is no, they did not.

Sen. Tom Cotton, R-Ark. wrote an op-ed in the New York Times suggesting Democratic mayors and governors who have turned a blind eye to violence this past summer should call in the National Guard to quell tensions. The Times newsroom revolted and ousted the editor responsible for publication.

Now, after the Capitol riot, Democrats embraced over 20,000 National Guard troops for the presidential Inauguration Day, more troops than we have deployed in Afghanistan and Iraq combined. Even then, Rep. Steve Cohen, D-Tenn. made insulting and inappropriate comments alluding to the trustworthiness of troops since most of them likely voted for Trump.

After being disrespected and serving as political props for Democratic hysteria, troops were forced to sleep in a parking garage. One Guardsman told Politico, “We feel incredibly betrayed.” Several outraged governors subsequently ordered them home.

After just three days in office, Biden had signed 29 executive orders. In that same timeframe, then-President Barack Obama had signed five and Trump just one. This completely undermines aspirations of unity.

Biden has the opportunity of seeking legitimate acts of bipartisanship, but he must deviate from the radical wings of his party. He can start by not supporting the suppression of his ideological adversaries. We’ll see if he’s up for it.

In 1975, then-future President Ronald Reagan warned us: “If fascism ever comes to America, it will come in the name of liberalism.”