The Beginning of Bipartisanship 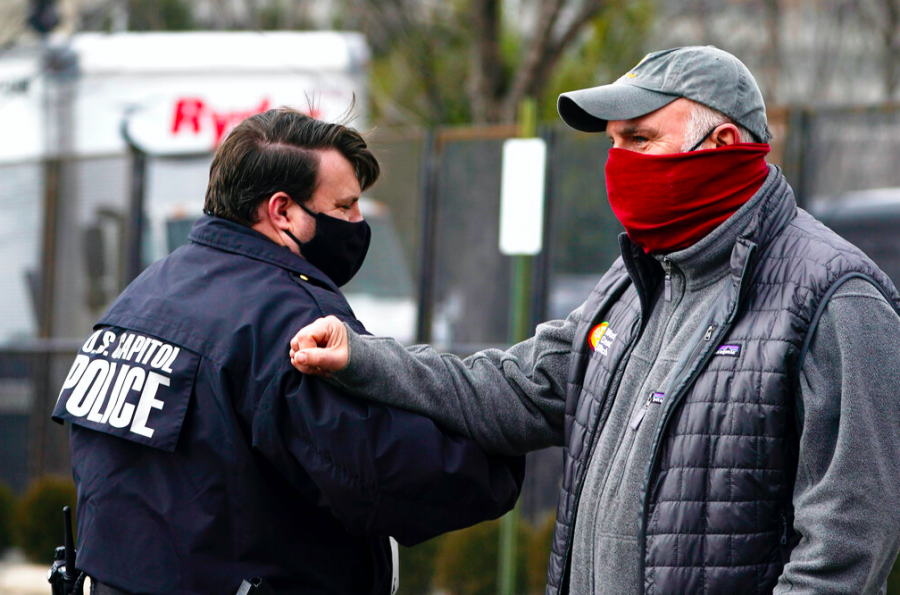 Chef Jose Andres, founder of World Central Kitchen, talks and bumps elbows with a U.S. Capitol Police officer while handing out food to those protecting the Nation's Capital.

Bipartisanship is a word that has been thrown around the news so often that we are beginning to forget what it stands for. An excellent figure who exemplifies bipartisanship and more is José Andrés, founder of World Central Kitchen (WCK) — an organization whose mission “uses the power of food to heal communities and strengthen economies through times of crisis and beyond.”

According to fashion magazine MarieClaire, at the inauguration, bipartisanship was the meaning behind Michelle Obama’s plum attire by Sergio Hudson, Hilary Clinton’s purple suit by Ralph Lauren and Kamala Harris’s indigo coat by Christopher Joan Rogers. Many speculate that the purple ensembles signified unity. Purple is a fusion of  red and blue, thus Democrats and Republicans can create this hue.

According to CNN, Sen. Dick Durbin  we cannot begin to heal the scars the previous administration has scattered until both sides of the aisles, blue and red, enter a common ground of bipartisanship.

Nevertheless, we must remember bipartisanship is not a new phenomenon and no one is expecting to solve our problems overnight like a fairy godmother.

Rather, bipartisanship is part of the equation in this long-overdue reckoning of our nation: a reckoning to hold us accountable on what democracy means in America. A reckoning to remind us that white supremacy is still an issue anchoring us down. A reckoning to teach us that unity does not give the green light to move on from Jan. 6 simply because it is in the past. This reckoning must emphasize to America’s future generations that you cannot unify by denying and choosing to ignore the lies damaging the fabrics of our society.

So where do we begin? We must go back to U.S. government 101. Understand we all have a duty — a social contract that binds us as American citizens of a democracy to fulfill our responsibility to act with public sentiment. Bipartisanship is not politics but part of the bigger picture that illustrates to the world the American story.

During this pandemic, we as a nation can react and adapt. Through bipartisan communities, we can lean on each other, stand up for each other and listen to each other. We are all tired of this pandemic, but to stop talking about COVID-19 is to become desensitized to the dire issues countless Americans are facing: unemployment, hunger and lack of health insurance. Democracy means listening to what others are experiencing and aiming to resolve those issues, not leave them behind.

Due to this security lockdown, restaurants in D.C. were unable to open for business. That is where WCK stepped in and partnered with local restaurants to feed the people. Andrés and his team delivered food not only to the security forces but also to the homeless in D.C., as soup kitchens locations were also closed.

In an interview on Full Circle CNN, Andrés summed it up best: “Democracy should be a celebration. Respect should be expected and … understanding that together is the only way we can be coming up with good solutions to the many problems we are facing.”

As the nation grapples with the pandemic, hunger lines have grown large, unlike any seen in the U.S. since the 1930s. According to Foreign Policy, food insecurity creates social instability and challenges policymakers to execute successful nutrition, agriculture and supply chain operations. According to Feeding America, as a result of the pandemic, millions of American families face unemployment with limited access to food and means to maintain a healthy life. Food now has become a part of national security as many Americans are suffering from hunger.

Andrés told CNN’s Anderson Cooper about two important legislative steps to combat this issue, which are the Restaurant Act and the FEMA Empowering Essential Deliveries or FEED Act.

According to The Washington Post, the Restaurant Act is a bipartisan direct package of aid to make sure restaurants are ready to reopen once the nation controls COVID-19. The FEED Act ensures  that the federal government, in partnership with governors, private restaurants, companies and NGOs, can assist in restaurants’ recovery through the pandemic.

Andrés reiterated that food is at the forefront of issues ranging from agriculture and commerce to the environment and health. As Andrés summed it up, when systems don’t work, that means it is time to get off social media and use your knowledge to fix it.

Visit  WCK for ways to volunteer and donate.