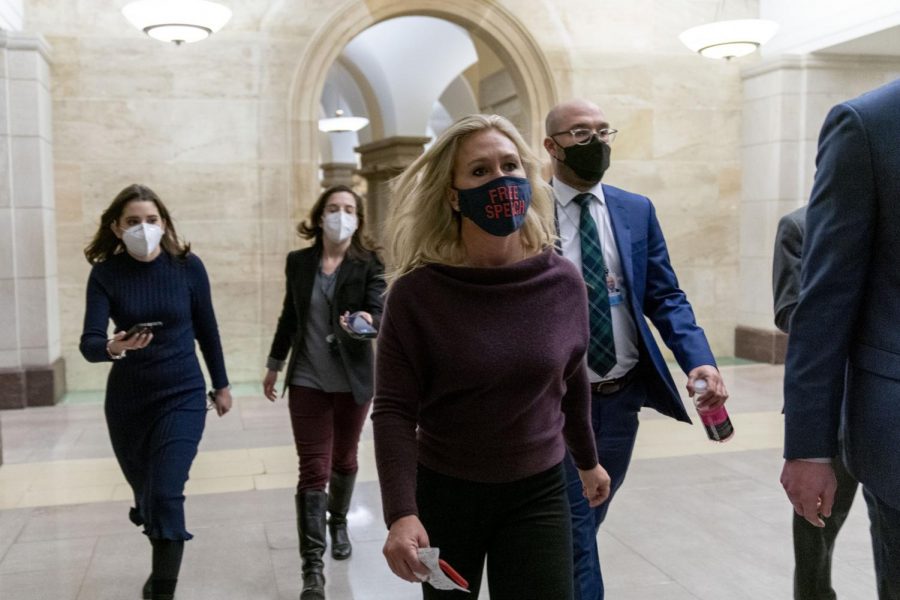 Rep. Marjorie Taylor Greene, R-Ga., walks back to her office after speaking on the floor of the House Chamber on Capitol Hill in Washington, Thursday, Feb. 4, 2021. (AP Photo/Andrew Harnik)

Rep. Marjorie Taylor Greene, a Republican from northern Georgia, is no stranger to controversy. GOP leadership assigned her to the House Education and Labor Committee, causing even more controversy due to Greene’s past affinity for far-right conspiracy theories and history of provocative statements.

According to The Washington Post, prior to her election to the House of Representatives, Greene had a long and prolific history with conspiracy theories. She has supported 9/11 trutherism and was a proponent of the infamous Pizzagate conspiracy. In the past, Greene also called for prominent Democrats to be executed for treason. She also recently expressed the belief that the wildfires that have ravaged California for the past year were caused by orbital satellite lasers controlled by former Gov. Jerry Brown of California and the Rothchilds, a wealthy Jewish family.

Greene is also perhaps the most well-known proponent of the QAnon conspiracy theory. According to The New York Times, there are several divides in the GOP concerning the party’s future with QAnon and its supporters like Greene. According to Political Science Professor Colin Swearingen, “The GOP will tolerate it so long as they can still win elections … [The GOP] has to toe the line between the Trump base and this broader coalition they hope to attract. If they alienate that coalition and can win elections, I believe the Republicans will cast [QAnon] aside.”

In early 2018, Greene was on video harassing Muslim Reps. Ilhan Omar and Rashida Tlaib for swearing on the Qu’ran and not the Bible. She is also accused of harassment towards fellow Rep. Cori Bush. Greene has expressed support for the protestors responsible for storming the Capitol, both before and after the insurrection, and she has continued to express her belief that the election was stolen from former President Donald Trump.

Most infamously, Greene has previously stated she believes that the Sandy Hook Elementary School shooting in 2012 was a staged operation, as, she claims, was the Marjory Stoneman Douglas High School shooting in 2018. Recently, she has come under fire for a past video of her harassing prolific Parkland survivor David Hogg in public.

Many Democrats have voiced their opposition towards Greene’s committee assignment. Currently in the House, there are separate resolutions calling for her removal from committees and the House altogether.