Director Steals The Emmys With a Proposal 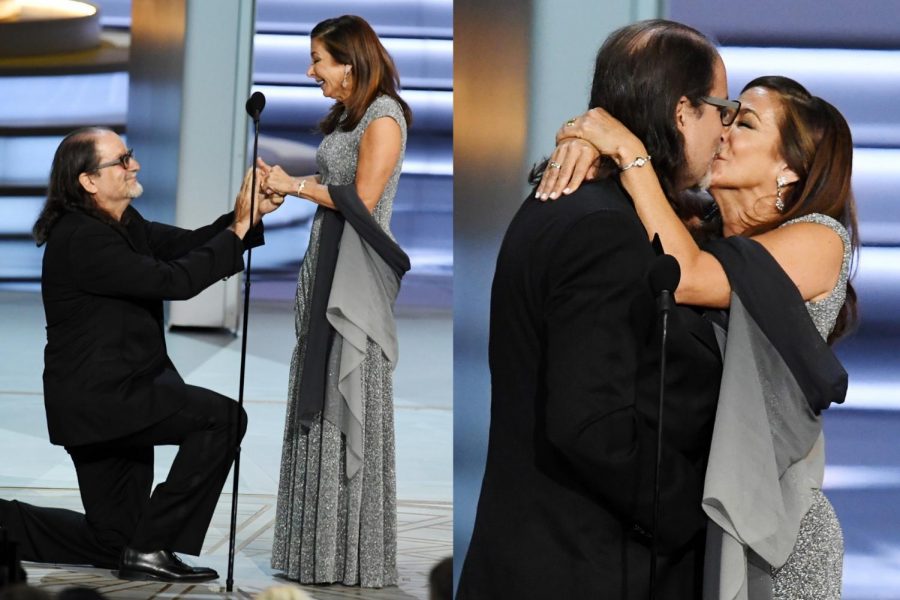 On Sept. 17, the 70th annual Emmys premiered with all of the usual award-show components: comedic monologues, social commentaries, politics and a marriage proposal!

Glenn Weiss was given the award for Outstanding Directing for a Variety Special. The tone of Weiss’ speech started off solemn, as he informed the audience of his mother’s passing just two weeks prior to the show. Weiss began his speech by saying, “Mom always believed in finding the sunshine in things…”

Weiss then drew his attention towards his girlfriend, Jan Svendsen, and said, “Jan you are the sunshine of my life…you always wonder why I don’t like calling you my girlfriend, it’s because I want to call you my wife.”

The celebrity-packed crowd all cheered in response to Weiss’ unexpected, very public proposal.

Svendsen, clearly in shock, joined her now-fiance on stage. Weiss got down on one knee and proposed using his late-mother’s wedding ring, and with teary eyes, she accepted.

In an interview with Access Live, the couple explained how their love story began when they met as co-workers for the Tony Awards. It is only appropriate that the couple’s special moment was shared on television, at an award show, the same platform in which they met. This proposal marked the 2018 Emmys as memorable.

Being a director and an expert on all of the behind-the-scenes of show business, Weiss was well-aware of the time constraints he was against during his acceptance speech.

“You have a minute thirty from the time your name is called [for winning an award].” Weiss explained how the teleprompter that signals the speech needs to be wrapped up was taken down. In that moment, all the rules and intricacies of keeping the Emmys on time were gone.

The Emmys decision to allow the unexpected proposal to unfold may have not saved their ratings, as they hit an all-time low according to Time.com, but the intimate-moment-made-public got people talking, not all of which were positive.

A theater professional, who wanted to be kept anonymous, told Page Six that he is known for being an “unforgiving stickler” when it comes to staying within the acceptance speech time frame. “Leave it to him to completely flout his own rule in order to grab as much attention as humanly possible,” they said.

So, not everyone supported the Emmy proposal as much as all of the cheering celebrities in the crowd. However, it seems Weiss and Svendsen are happy with their over-the-top proposal.