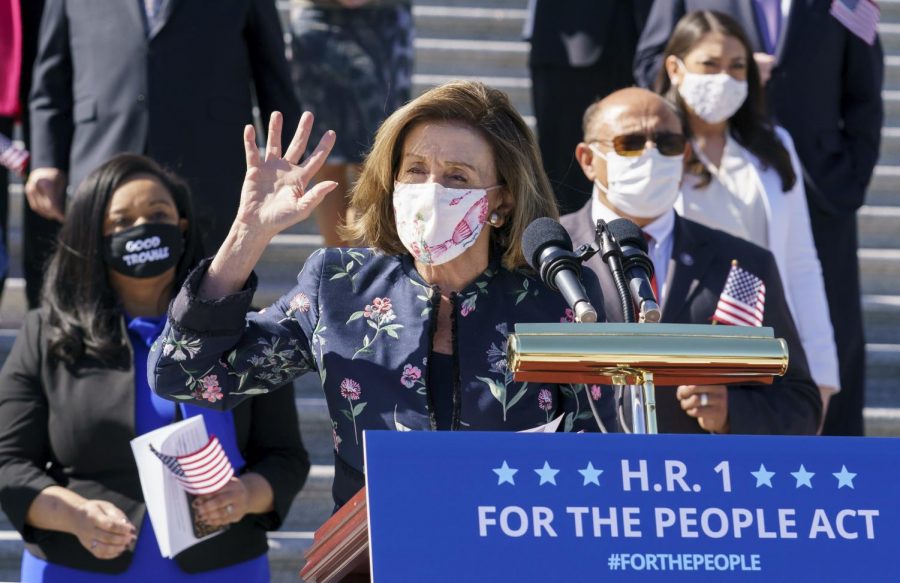 Speaker of the House Nancy Pelosi and the Democratic Caucus address reporters at the Capitol in Washington regarding H.R. 1, the For the People Act, on Wednesday, March 3. (AP Photo/J. Scott Applewhite)

H.R. 1’s full purpose, according to Congress’s website, is to “expand Americans’ access to the ballot box, reduce the influence of big money in politics, strengthen ethics rules for public servants and implement other anti-corruption measures for the purpose of fortifying our democracy, and for other purposes.”

The bill’s body includes measures that touch on nearly every aspect of elections including the following:

reforms to restrict partisan gerrymandering,
to force disclosure of donors to “dark money” political groups that are conduits for wealthy anonymous donors who look to influence politics anonymously,
a revamping of the Federal Election Commission, which has been immobilized by partisan impasse for years,
and an overhaul to voter registration concerning same-day registration, 15 days of early voting and no-excuse mail-in ballots, and restoring former felons’ voting rights.
fortifying and enforcing political ethics, such as preventing members of Congress from serving on corporate boards to avoid conflicts of interest and
requiring presidents to disclose their tax returns from the past 10 years.

Originally, the bill was introduced on Jan. 3, 2019, by John Sarbanes (D-MD) on behalf of the House Democratic majority as the first official piece of legislation from the 116th United States Congress. In 2019, the bill passed in the House 234-193, but it was blocked from receiving a vote by the Republican-controlled Senate under then-Senate Majority Leader Mitch McConnell (R-KY).

Seen as a trademark piece of legislation from the Democratic House majority, the bill still faces vehement opposition from Republican lawmakers, according to Times Union. In the Senate, Republican opponents can block the bill from proceeding to a vote with a filibuster. The increased control from the federal government over elections and centralization of electoral control in Washington, they argue, encroaches on a state’s authority to conduct its own elections.

“Democrats want to use their razor-thin majority not to pass bills to earn voters’ trust, but to ensure they don’t lose more seats in the next election,” said House Minority Leader Kevin McCarthy, according to the Associated Press.

In 2019, McConnell called H.R. 1 the “Democrat Politician Protection Act,” stating on the Senate floor that, “This sprawling power grab clocks in at around 570 pages. Seemingly every one of those pages is filled with some effort to rewrite the rules to favor Democrats and their friends. […] It may pass the House, but not the Senate.”

Colin Swearingen, professor of political science at John Carroll University, provided a comment on the bill’s aspects and its likely outcome in the Senate:

“This bill fundamentally reshapes elections in the United States, largely by giving the federal government more control over election administration and oversight,” Swearingen told The Carroll News. “This is controversial because election administration has largely been under state domain. If it passes, expect there to be a number of lawsuits from states in federal court.

“Of course, whether or not it passes is a huge question,” Swearingen continued. “In order to avoid a filibuster, Democrats need 10 Republican senators to support the measure. That’s not happening. The only way this passes is if Democrats use the nuclear option to change the rules of the U.S. Senate to amend or eliminate the filibuster.”

While some legislation only requires 51 votes in the Senate to pass, with such a deeply divisive, monumental overhaul of American elections on the floor, 60 votes are needed to overcome a filibuster from Republican opposition.

“Right now, the rhetoric from the Democrats, especially those who are most progressive is that it’s worth getting rid of the filibuster to save democracy,” Swearingen said. “They are hoping that both Senators Manchin (D-WV) and Sinema (D-AZ) agree. Getting their buy-in would allow these changes to take place, but both have indicated they are not open to eliminating the filibuster.”