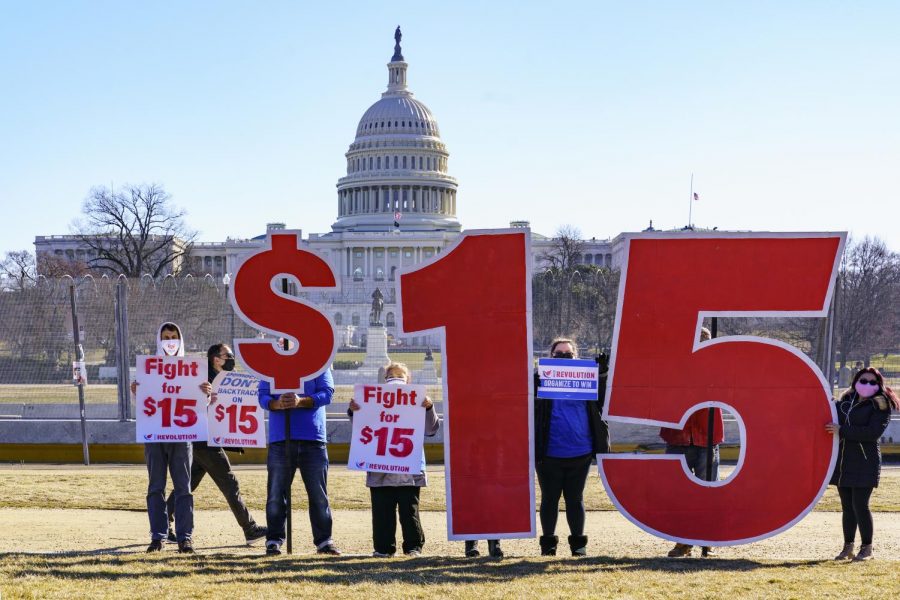 Activists appeal for a $15 minimum wage near the Capitol in Washington, Thursday, Feb. 25, 2021. The $1.9 trillion COVID-19 relief bill being prepped in Congress includes a provision that over five years would hike the federal minimum wage to $15 an hour. (AP Photo/J. Scott Applewhite)

In the 1890s, the United States was home to thousands of sweatshops that employed women and children, paying them what were known as “nonliving wages,” which were not enough to cover the basic necessities of life. These sweatshops were also noted for long hours, unsanitary conditions and dangerous work.

During the Progressive Era in the U.S., social activists came to the idea of a “minimum wage” sufficient to provide workers with enough income to live comfortably. These activists were successful at first, getting states to pass minimum wage laws, but these laws were struck down by the Supreme Court between 1923 and 1937.

Once President Franklin D. Roosevelt started on the New Deal, he put provisions in the National Industrial Recovery Act that would set maximum hours and a minimum wage. The U.S. Supreme Court ruled this act unconstitutional, and those minimum wage regulations were abolished.

However, just two years later, the decision was overturned and a federal minimum wage of 25 cents per hour was set. Over time, the minimum wage has been increased, with the most recent increase being from $5.15 to $7.25 in 2009. 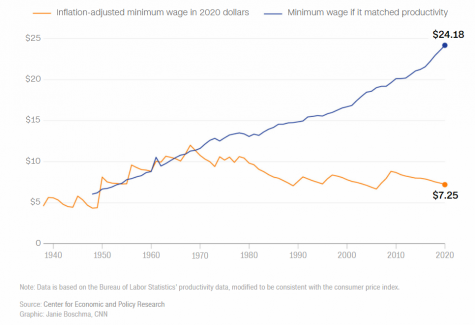 Since the 1970s, accounting for inflation, the minimum wage has decreased in its purchasing power. This is the cause for contention among many progressives who want the minimum wage increased.

In 2012, 200 fast-food workers in New York City decided that enough was enough. They took to the streets to demand $15 per hour and union rights. Now, they petition Congress to raise the minimum wage. Recently, the vote nearly passed in the Senate, but Democratic senators Joe Manchin and Kirsten Sinema voted against the motion, kicking a minimum wage increase down again.

According to a 2021 Congressional Budget Office report, raising the federal minimum wage to $15 would benefit 17 million workers and lift 900,000 people out of poverty. However, it would also increase unemployment by about 1.4 million people and increase the deficit by $54 billion due to the increasing costs of goods and services provided by the government.

Unfortunately, not everyone agrees on an increased minimum wage. In a November 2015 survey of economists by the Employment Policies Institute, nearly three-quarters of U.S. economists opposed a federal minimum wage of $15. In the same survey, 71% of economists said that the Earned Income Tax Credit is an efficient way to address income needs of poor families, compared to the 5% of economists who think a $15 minimum wage is a better solution.

Whether it’s an increase of the federal minimum wage or an expansion of the EITC, action must be taken to help poor families — many of them front-line workers — whose struggles have only been exacerbated by this pandemic.