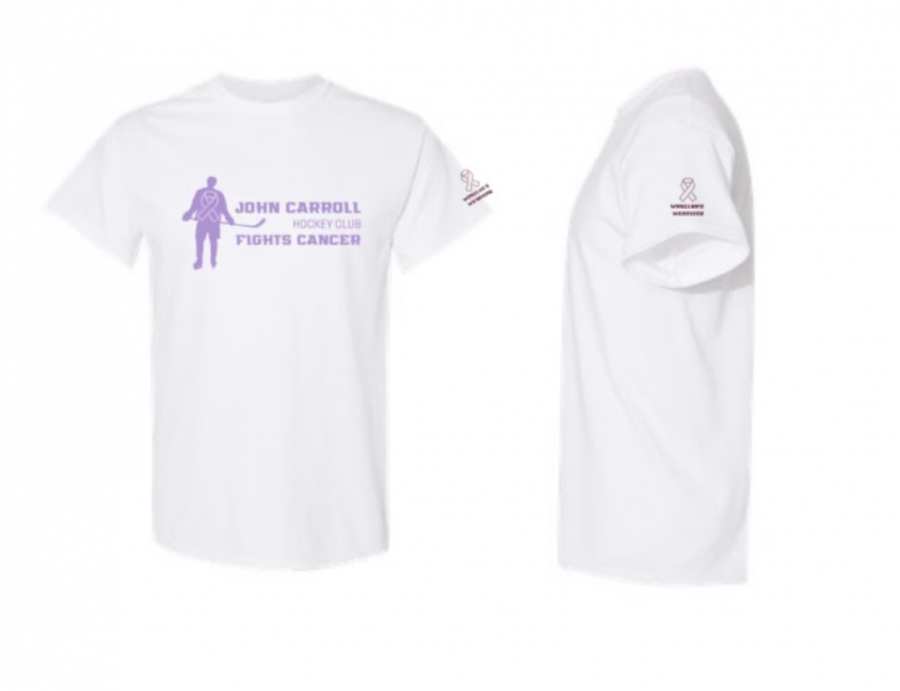 Cancer has affected most of us in some way. In an effort to help fight the disease, the John Carroll club hockey team is currently putting on their annual JCU Hockey Fights Cancer fundraiser.

“Last year we raised over $800,” said Mike Ulishney, club president and defenseman. “We have reached a steady incline since the year before we raised $500. We won’t have a game or raffles this year, and not as many people are on campus, but we would like to meet $400 to give back to the Movember Foundation.”

The Movember Foundation raises funds primarily for testicular cancer and mental health awareness, according to their website. They promote their cause, and have some fun too, by encouraging their male participants to grow mustaches.

The team will be selling the shirt seen below, which includes the Wenzler’s Warriors emblem that was generously blessed by Melissa Wenzler. Along with raising money, the shirt also commemorates the late Chris Wenzler, who passed away over the summer after battling cancer. He was JCU’s Sports Information director for many years.

“Wenz would be proud of these young men from the hockey team,” said Joe Ginley, JCU’s new Sports Information director. “They are supporting a great cause and fighting cancer. It really is a wonderful thing.”

In an effort to help the Movember Foundation, the hockey team will be selling the T-shirts at $10 for sizes S-XL and $12 for XXL shirts. Money can be sent to the Venmo account @HockeyJCU. You can also purchase the t-shirts by clicking here.

People who purchase shirts can pick them up from the hockey team free of charge at the Dolan Center for Science and Technology on a day to be determined. For an additional fee, shirts can also be shipped directly.

It’s our annual John Carroll Hockey Fights Cancer fundraiser! Help us raise money for the Movember Foundation by buying tshirts! Link is in our bio, shirts are just $10! Come together and support a great cause, Blue Streaks! pic.twitter.com/VxqEsAujfk

“It’s very important because this allows us to connect with the community as a new team,” said Jimmy Grable, a junior blueliner. “This is the first event we’ve done in the community this year, and we appreciate everything the community does for us, so it is nice to be able to interact with them even if they don’t get to see us directly.”

“It is great to be apart of something like this fundraiser as a team and organization,” said Captain Brian Russell. “I’ve seen the Hockey Fights Cancer event grow in terms of awareness and the number of participants. We all like to get behind something and, unfortunately, we all know someone who has had cancer, so this has meaning behind it.”

Russell went on to speak of the importance of the event to the team and what it may mean to the community.

“It is one of those events that makes you take a step back and realize how lucky we are that nobody on this team has cancer,” he said. “It shows us the bigger picture that life is very precious, and we’ve got 30 guys having a great time together. This event brings us all a little closer each year. Whether it is during a little moment or a hot streak, it finds a way to unite everyone and strengthen the bond going forward.”

“This is our biggest event of the year,” said Ulishney. “Donating to cancer is the biggest win we can have. This brings the team and family members together through buying T-shirts and growing mustaches in November. It is always a fun sight to see us bond together.”

While the team’s biggest event of the year continues, the goal stays the same.

“I’ve had a couple of family members and family friends that have had cancer,” said Russell. “It is very important for me to spread awareness, and we aren’t finding the cure, but anything we can do to help and spread awareness and raise money for a good cause is worth it.”