Jesuit Schools dominating March Madness; Why I think one of them will win 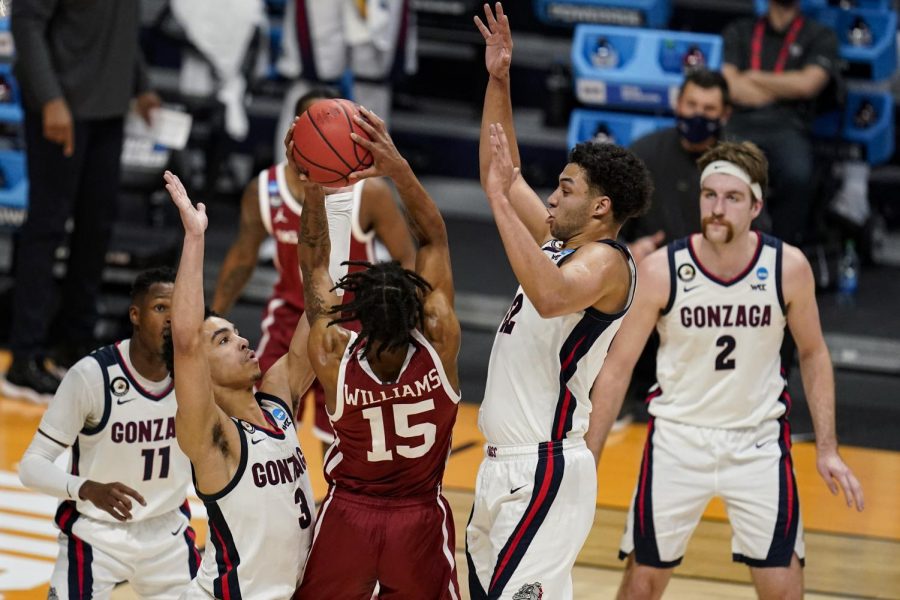 "Oklahoma guard Alondes Williams (15) is stopped by Gonzaga guard Andrew Nembhard (3) and forward Anton Watson (22) in the first half of a second-round game in the NCAA men's college basketball tournament at Hinkle Fieldhouse in Indianapolis, Monday, March 22, 2021. (AP Photo/Michael Conroy)"

There are only 16 teams remaining in the NCAA Division I Men’s Basketball Tournament. Three of them are Jesuit universities.

Despite having never won a championship, Gonzaga is considered one of the most accomplished basketball programs in the country. Under Head Coach Mark Few, the Bulldogs have made 11 appearances in the Sweet Sixteen and even reached the tournament championship game in 2017.

Gonzaga (28-0) is the only undefeated team remaining and has beat its last two opponents by a combined 59 points. The Zags will play Jesuit sister school, Creighton, in the Sweet Sixteen on Sunday, March 28.

The Creighton Bluejays are not nearly as dominant as Gonzaga but have won five of their last six games. During the regular season, Creighton beat No. 5 Villanova, No. 22 Xavier and No. 23 Connecticut. The Bluejays also only lost by one point in their fourth game of the season against No. 5 Kansas. In the round of 32, they rolled to beat Ohio University 72-58.

One of the two Jesuit universities will advance to the Elite Eight and have their chance to capture a national trophy for the first time in school history.

Loyola Chicago has had the most impressive run of any team in the tournament. In the first round, the Ramblers defeated ACC-Champion Georgia Tech 71-60. Then, against Big Ten Champion and No. 1 seed Illinois, Loyola stunned the nation by upsetting the Fighting Illini 71-58. According to NCAA.com, 15.7% of brackets picked Illinois to win the championship, trailing only Gonzaga (38.8%).

The Ramblers are only three years removed from their improbable run as a No. 11 seed to the Final Four. This year as an eight seed, Loyola Chicago would have to get by No. 12 seed Oregon State and then the winner of No. 11 Syracuse and No. 2 Houston to once again be one of the four teams left standing.

Right now, Loyola Chicago is scorching hot, having won 19 of its last 20 games (including eight in a row).

Of course, every team in the NCAA Tournament has had an impressive season in their own right. However, I think one of the three will become a National Champion.

It’s been 45 years since an undefeated team has won a national championship. Although plenty of people have their doubts about Gonzaga, I believe this year is the year.

The Zags have four players averaging in double-figures. Drew Timme (65.1%) is the best shooter in the nation. Their elite offense has resulted in a team field goal percentage of 55.1%, an average of 92.3 points per game and a points differential of 23.7 — all marks rank first in the NCAA.

If Creighton were to upset Gonzaga, the Bluejays would have the best argument as the most dangerous team in the nation. They would only have to win three more games after taking down the best team in the tournament for their first-ever championship. As noted earlier, Creighton can upset the top teams in the nation at a moment’s notice.

Loyola Chicago can limit its opposition’s offense, as the Ramblers have only allowed 55.8 points per game, which ranks atop the NCAA. They are plenty steady on offense, shooting as a team at 50.4% per clip (fourth in the nation).

Each program is one of the 16 teams remaining for a reason. Jesuit universities are not only among the best academic institutions in the world, but they have excellent basketball programs too. By the time April 5 comes, I believe Creighton, Gonzaga or Loyola Chicago will be the last team standing. Now the question is: Which one will it be?